Veritas et Sapientia – “If more exciting school board meetings, primaries for craven politicians, and parents yanking funding from schools that don’t serve them are what it takes to run every one of these moral cretins out of every position of power they’ve abused throughout their careers, then go, Americans, go. Do it for the kids. Our future will remember who stood up for the truth, lives, and liberties, and who made billions of precious humans needlessly suffer.” – Joy Pullman, No Those Who Pushed The Lockdowns Can’t Hide From The Consequences

No, Those Who Pushed Lockdowns Can’t Hide From The Consequences Now – Joy Pullman puts on paper what we’ve been saying on radio since March of 2020: the “lockdowns” were designed to inflict maximum, permanent human misery & suffering.

Elizabeth Warren Wants to Destroy Your Supermarket – Fauxchahontas’s latest public hissy fit is against BIG Grocery which isn’t the villain their enabler BIG Ag is but meh, Warren’s not been right since…

Biden Admin Quietly Creates Creepy Database Storing Information About Unvaxxed People Who Request Religious Exemptions – Just another day at Ye Ol’ Deep State, folks. This will make it easier to round up some “examples” of “white supremacists” who are “religious fanatics”…big fun!

Repeat Booster Shots Spur European Warning on Immune-System Risks – What do the quacks at the European Union Medicines Agency, know, that the rest of the drunk on booster Cabalists don’t!? Maybe they have found their souls and rediscovered guilt in committing manslaughter? Or maybe their FREE Starbucks home delivery cards have run out of credits and they want retribution for this crime!?

Man gets genetically-modified pig heart in world-first transplant – According to the Church teaching I found, this is actually a “licit” procedure but for me, doesn’t pass the creepazoid, Creature Feature

Indiana life insurance CEO says deaths are up 40% among people ages 18-64 – It is looking like the FrankenJab™ is doing what Geert Vanden Bossche feared it would (see my Substack on this) as reports like this one unfortunately are becoming common.

MUST READ: The Untold Story of JFK, Dr. Frances Kelley and Thalidomide

Disgraced FBI No. 2 Andrew McCabe Calls For Feds To Treat ‘Mainstream’ Conservatives Like Domestic Terrorists – Andrew McCabe is only telling us what the demonic plan for opponents of the New Normal are in for, we should give him a Snitch Award.

Biden’s Vaccine Mandate Is Outrageously Unconstitutional. Why Couldn’t Lawyers Make That Argument To The Supreme Court? – Good question and the answer is because nearly all “Constitutional lawyers” are legal positivists who’ve never read the 10th Amendment and think “ratifying” is a game involving mouse traps

Bob Saget Was Double Vaxxed AND Boosted – He tweeted on Nov 28 that he got his “booster” as Biden, Peppermint Psaki and Whoopie commanded at the time. 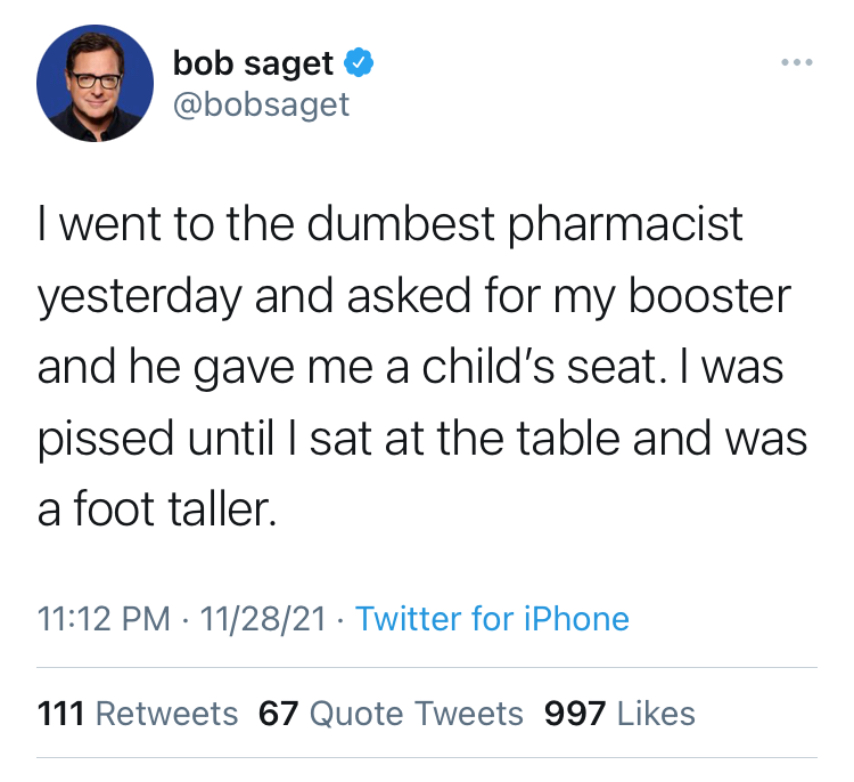 Despotism Is the New Normal: Looming Threats to Freedom in 2022 – John Whitehead sees the Cult of Death solidifying its ill-gotten CoronaDoom™ gains and what might be done to stop them

In defying the COVID regime, Novak Djokovic is the new ‘People’s Champ’ – Djokovic is not being “detained” he has been arrested by the Aussie commies and is demanding a court hearing on supposedly “violating CoronaDoom™ ‘safety rules'”.

Dane County Tells Fed-Up Residents ‘Because I Said So’ Is A Good Enough Reason For Never-Ending Mask Mandates – Dane County is packed with communist LibTards and is a good indicator of what you can expect from their mentors, Biden et al

The New Christendom Is Rising & Conservatism Inc Has Taken Note

Conservatism Inc. i.e. Pawn Vannity, Crusty The Levin and The BenFather et al have made hundreds of millions off of the gullible yet lovable patriotism of the MAGA hoi polloi, so desperate to “get their America back” they turn to these charlatans who fill them with bumper sticker platitudes and incriminations of all the villains who are fault without ever properly identifying the real bad guys or proposing a way out of the Orwellian web they seem perpetually stuck in.

Those days are coming to an end as the CoronaDoom™ and Rainbow Purification Leagues have exposed these frauds for what they are: professional grifters. Sohrab Ahmari is one of those who has flown slightly below the grift after his conversion to Catholicism (but he ain’t free yet) and proposes an actual partial fix for what morally ails ‘Muricah: make Sunday holy again!

For starters, Sabbath speaks profoundly to the restlessness and misery that is the lot of millions of Americans. The erasure of the boundary between toil and rest is something felt as much by white-collar professionals as by working-class Americans, albeit in different ways. America’s blue laws were abolished in the name of freedom, but it turned out to be freedom for Jeff Bezos and other large employers. Not freedom for workers or families.

Plus, the Sabbath is good realignment politics, at a time when workers have the job-market advantage. A campaign for the Sabbath can bring together labor unions, religious conservatives, and small-business owners (that last group historically opposed abolishing blue laws for lack of ability to compete). Can any other issue unite three core constituencies of the new right quite like Sabbath?

From my new The Daily Christendom on Substack: The Good Guys DO Win! All hail Novak Djokovic, a true sportsman, hero athlete AND Crusader… This picture says it all. Novak Djokovic showing his son love for the Theotokus and the child Jesus (he is Eastern Orthodox). If you are devoted to Our Lady as I am then you know, this isn’t a one off.

It’s January 2022 And The Immodesty Is About To Go Nuclear Because It WENT Nuclear – Venerable Bishop Sheen called out ‘Muricah back in the 1960’s while speaking to a group of young Catholics on “Youth and Sex”: “8:15 in the morning, the 6th of August, 1945, when we flew a military plane over this city, when we dropped that atomic bomb on it; that bomb on blotted out boundaries. There was no longer a boundary between the military and the civilian, between the helper and the helped, between the wounded and the nurse and the doctor, between the living and the dead. For even the living who escaped the bomb were already half dead. So we broke down boundaries and limits and from that time on the world has said we want no one limiting me. … You want no restraint, no boundaries, no limits. I have to do what I want to do. Now let’s analyze that for a moment, is that happiness?”

The MIKE CHURCH SHOW and the Veritas Radio Network’s CRUSADE Channel are 74 months old this month. To see another 12 months of life, please support our crowdfunding effort, become a Founders Pass Member, place an ad or much more. Click SOS our Mascot for details!WednesdayMoMonday Pile of prep