Mandeville, LA – Exclusive Transcript – When people are confronted with what seems to be no-win situations, and when they are confronted with the absoluteness of certain defeat, this is when some are inspired or are motivated to maybe do things and consider things that they had not considered before.  Right now may be such a time.  Check out today’s transcript for the rest…

Mike:  When people are confronted with what seems to be no-win situations, and when they are confronted with the absoluteness of certain defeat, this is when some are inspired or are motivated to maybe do things and consider things that they had not considered before.  Right now may be such a time.  It may be such a time.  If you were to reenact the history of the American Revolution and start with the Stamp Act in 1765, and then start with Patrick Henry’s brave and courageous — he was only 28 years old.  He walked into the House of Burgesses.  They were reading the Stamp Act.  He had just been elected.  He went: Wait a minute, you guys are actually thinking of implementing this?  Are you nuts?  Right there, he proposed eight resolutions.

This is in the book Patrick Henry American Statesman, which we have ample supply of.  You want to give a great Christmas gift to read?  Give Patrick Henry American Statesman, our reissued version of it.  There’s my plug for the book at MikeChurch.com and Amazon.com.  We have special copies, folks, really special copies.  So Henry goes in there and says: You guys are actually thinking of doing this?  Let me tell you something here.  I might be an Englishman, but I am not an Englishman that is going to tolerate and accept this kind of tyranny, and neither should you be.  So he proposed some resolutions and somebody even shouted from the back of the room, “Treason, treason!”  Henry said, “If this be treason, make the most of it.”

The point is, when that happened, and when word of that began to circulate through the colonies — they didn’t have the internet.  All they had were simple printing presses.  It was difficult to assemble type together to print these things.  When word started spreading via printed word and word of mouth, there were others that thought the same way, such as Samuel Adams in Massachusetts, John Witherspoon in New Jersey and Connecticut.  Then there were great republicans like George Clinton in New York and Judge Robert Yates in New York as well.  There were great Pennsylvanians that thought this way, North Carolinians and South Carolinians.

When they began to think of the same mind, they began to think: We need to organize and try and speak together as one voice.  We need to tell the king: Look, dude, stop doing this, and stop sending your troops over here to try and enforce it.  One thing led to another, and by the time the Bostonians had had it with all this and dumped the tea into the harbor in December of 1773, by the time June of 1774 rolls around, the Virginians, in their legislature, in the House of Burgesses, decide: Even though we’re not supposed to, we’re going to stand with Massachusetts and we’re going to call for a day of prayer on the 1st of June to ask for divine intervention and ask for what we need to do to stop this, what we need to do to alter this.  This, of course, made official London very angry at this.  They sent Dunmore in there to dissolve the assembly.  Dunmore did dissolve the House of Burgesses.

As this continues to happen, more people become friendly to the cause.  More people start to acknowledge: Man, these guys really are jerks.  Who cares if we’re Englishmen?  They’re not treating us like Englishmen.  They’re treating us like a bunch of foreigners.  Somehow they’re acting like they’re at war with us. This ultimately results in the creation of the Continental Congress, which does nothing more than suggest a few things and provides a platform and a vehicle to organize under.  It’s in the Second Continental Congress that things begin to heat up.  The measures that have been advocated and the petitions are all still being ignored or denied.  This is what leads to the events of 1776.

To understand ’76, you have to understand what happened before.  I would say that what’s happening today is very similar to what happened in 1765 to 1776.  The big difference is they did not have the distraction that was the internet — the internet is a positive and a negative all at the same time.  The distraction provides inaccurate and sometimes hyperbolic information that is not useful and in many instances is not true, not correct.  They didn’t have that.  It seemed that their options were limited and smaller, and that the threat was existential.  Their response, which was the Declaration — well, the first response was the State of Virginia saying: That’s it, we’re out.  They left in May of 1776, long before the Declaration was even proposed.

Are we at that point?  If we are at that point, then where are the leaders that are going to say we’re at that point?  I thought back in 2010 when the Affordable Care Act passed that it would cause a constitutional crisis.  Just listening to Professor Gutzman, and based on our conversation today, I think we are in a constitutional crisis.  There doesn’t seem to be a federal remedy.  There doesn’t seem to be a state remedy.  It seems that by the sheer value of the hulking power that is this behemoth called the federal government or the national legislature that all avenues and all options have been removed.  If all these options have been removed, what remains?  That’s the question.  We ought to take what remains and concentrate on it. 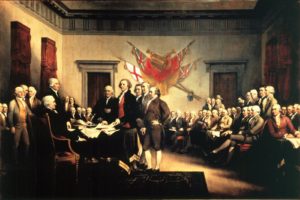