Mandeville, LA – Exclusive Transcript – Here’s another great little historical inconvenience, Frank.  Pennsylvania was also part of a perpetual union according to the Articles of Confederation.  You have been living in this union in violation of your own theory, according to the act ratified in November of 1781 called the Articles of Confederation.  How does that taste in your pipe?  Check out today’s transcript for the rest…

Mike:  Let’s go to the phones a little early today.  We will start in the great State of Pennsylvania.  Frank, you’re first up today.  How you doing?

Caller Frank:  Good morning, Mike.  I was wondering, these guys that want to secede, like Colorado, Baton Rouge, what’s their GNP?

Caller Frank:  How are they going to sustain their existence?

Mike:  I would imagine they would figure out how to raise their own local taxes, right?

Caller Frank:  No, but you have to have a product — one thing we learned from the Civil War is arrogance doesn’t feed the belly.  If you look at the money that these Baton Rouge —

Mike:  You may have learned that from the Civil War, Frank.  I didn’t learn that.  I learned the exact opposite.  I’d like to know who it was that was being arrogant.

Caller Frank:  You’re talking a household compared to a state.  A state is not a household.

Mike:  I am well aware that a state is not a household.

Caller Frank:  Those are completely different definitions of that.  What you have as a state, you have the ability to change.

Mike:  Who formed the state?

Caller Frank:  But if you look at Baton Rouge and you look at Colorado and these people that want to succeed from the nation —

Caller Frank:  — how many federal tax dollars do they suck up every day?

Mike:  Frank, I’m going to cut you off if you don’t let me speak, sir.  First of all, it’s secede.  It’s not succeed.  Succeed is what you do when you win something.  You secede, which means to withdraw to the other room.  It’s from the Latin word secedere.

Caller Frank:  That’s what I said.

Mike:  It’s se-, se-, se-, not cu-, cu-, cu-, number one.  Number two, let’s go point by point.  I’m trying to interrupt you here so we can have a conversation point by point.  You say that because these people want to leave a union, in order to do so, they ought to have to prove to the people they are in union with that they have a GNP that is sufficient to their own needs?  Is that the starting point?

Mike:  You mean like Switzerland does with France?  Because that doesn’t happen in the real world.

Mike:  What’s the difference between Switzerland being landlocked, or partially landlocked anyway — I realize there’s access to lakes there — or Austria or any of the other central European countries?

Caller Frank:  Because where you’re talking about, there’s FAA requirements over those states —

Mike:  Everywhere we turn, we have government.

Caller Frank:  — bringing goods by air and by sea and by truck.

Mike:  Everywhere we turn we have government here, FAA requirements.

Caller Frank:  I’m sorry but that exists.  You want to take away — you love a good story but you want to evade the facts.

Mike:  I’m not evading the facts.  You’re the one that’s interjecting all the what could not be because we have this now and it’s so wonderful and the pie is in the sky.

Caller Frank:  Mike, you make an argument like my kids.  I want to do this, I want to do that.  Great, move out and when you provide for your own, you can do whatever you want.  When you live under my roof —

Mike:  First of all, Frank.

Mike:  Okay, Frank.  Calm down for a moment here.  First of all, we’re talking about south Baton Rouge seceding from or breaking away from their north Baton Rouge neighbors.  Why do they have to put up a GNP?  They’re not seceding from the union.  They’re leaving a part of Baton Rouge that they don’t want to be affiliate with anymore.  That’s what the story is.

Caller Frank:  You lumped it into the Colorado story.

Mike:  Let’s move to Colorado then.  Colorado wants to form a state.  We have no indication that that state does not want to join the union of states and be in partnership with the states around it.  What are you talking about?

Caller Frank:  And join the Union?

Mike:  I would assume.  I haven’t seen anyone say that they don’t.

Caller Frank:  I didn’t see that in the article.  They wanted to be independent, as an independent, sovereign nation.

Caller Frank:  Pennsylvania, what you said when you answered the call.

Mike:  Is the State of Pennsylvania sovereign or is it not?

Caller Frank:  It is not.  It’s comprised of the United States government.  It’s in the Union of —

Mike:  No, what came first, Pennsylvania or the Union under the Constitution?  Answer the question one at a time.  What came first?

Mike:  Thank you very much.

Mike:  If Pennsylvania preceded the Union, then how can the Union have created Pennsylvania and purport to own it?  Was there an act of sale?

Caller Frank:  Because when the Union was formed, Pennsylvania was part of that formulation.  I’m not sure the number it was.  I know Delaware was number one.

Mike:  Here’s another great little historical inconvenience, Frank.  Pennsylvania was also part of a perpetual union according to the Articles of Confederation.  You have been living in this union in violation of your own theory, according to the act ratified in November of 1781 called the Articles of Confederation.  How does that taste in your pipe?

Caller Frank:  Right, and where are the Articles of Confederation now by law?

Mike:  What does it matter?

Caller Frank:  The Supreme Court rules on that —

Mike:  You want to throw out —

Caller Frank:  There are Supreme Court rulings on that.

Mike:  You want to throw out the Supreme Court —

Mike:  Frank, I have nothing else to say to you, sir.  There is no point in continuing this conversation.  You’re a big blog American nationalist. That’s fine.  You are free to think that way, but you are not free and you are not entitled to your own facts.  The fact of the matter is, and you can’t find any unionist or nationalist or Lincoln lover out there to answer this question.  I just proved to him, this is proof positive, Pennsylvania ratified the Articles of Confederation.  They went into effect in 1781.  They were proposed and drafted in 1776.  It went into effect in 1781.  These facts are not in dispute here.  If we want to use language and you want to try to ensnare people into indissoluble unions using language, let’s do that then, shall we?

That would mean then that the Articles of Confederation, when ratified, called for a perpetual union of friendship, a perpetual league of friendship.  As a matter of fact, to do anything under the Articles of Confederation, you had to have unanimous consent.  If you wanted to amend it, you had to have all 13 signatories, unanimous consent.  They may have been more binding than the Constitution.  When Pennsylvania and other states ratified the Constitution, did they not violate their own perpetual union, if you want to use that terminology?

You’ll find a great discussion of this in a very scholarly fashion in Is Davis a Traitor? by Albert Taylor Bledsoe.  You can find the paperback edition at MikeChurch.com.  This is why I wanted to republish the book, to make sure people had access to it.  Bledsoe’s statement of facts and of the history of the United States is undeniable.  The facts are not at issue.  It’s clear.  Does that mean all this has to happen?  I’m simply running through a thought exercise here, talking about Baton Rouge, Louisiana, one part of it splitting off from another.  Then we get into [mocking] “It’s a union.  You can’t leave it!”  Sure you can.  I never said that they should.  They can leave their union of Baton Rouge, can’t they? 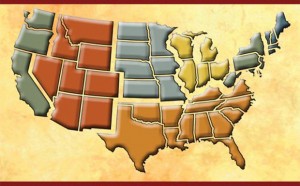