Mandeville, LA – Exclusive Transcript – Let’s not be naïve.  It is nearly impossible if not impossible to shield your youngin’ from the influence of social media.  I don’t know that it’s totally necessary that you shield them.  I think maybe monitoring them is preferable rather than trying to accomplish the impossible, which is to just not allow them to use it.  No, that’s not the whole: Give them a condom because they’re gonna do it.  It’s ubiquitous, folks.  It’s on every phone, every computer, every television screen.  We live in a media world whether we like it or not.  They’re going to be exposed to this.  Check out today’s transcript for the rest…

Mike:  Guys, gals, have you seen the story of the dad that cut his pants off to make short shorts.  I don’t know who this lunatic blogger is, Jezebel.

AG:  Is it the Jezebel website?  I think it’s part of Deadspin, Gawker, that whole community right?

Mike:  She tweets under the username Jezebel.  She went to her Twitter page and announces herself as some sort of commentator on sex and current events and what have you.  Folks, if you haven’t heard this story, I think you’ll enjoy it.  The dad is trying to make a point, which I think is a great point to make and one that I have actually made with one of my daughters a time or 16, and that is you’re not leaving this house with that on.  Go look in the mirror, for crying out loud!  I think sometimes the kids are just going along.  I don’t think my daughter means anything by it or is trying to attract attention to herself in a lascivious manner.  I think because the other kids are doing it, it’s just follow-the-leader kind of thing.  When you point it out to them that it’s not appropriate, then you can make the point to them and make it in a manner in which they can understand it and don’t get so angry and defensive about it.  So, I’ve been through this.  I never cut my pants off and went out into public to  make the statement that the über short shorts are distasteful.  If you go to today’s Pile of Prep, you’ll see the story in there, “Dad wears short shorts to teach teen a lesson; Jezebel cries ‘tyranny of modesty’.”  This is from Twitchy Media.

Some kids think parents live to embarrass them. One Utah father decided to live up to that expectation to teach his teen daughter his fashion motto: “Modest is hottest.”

Scott Mackintosh wanted his kid to know her too-short-shorts “maybe aren’t as ‘cute’ as she thinks,” so he sliced up an old pair of jeans to wear on a family night out. There were photos taken, and yes, they went viral after his daughter posted them on Tumblr.

Mike:  You can see the pics.  The dad is in a t-shirt that says “Best Dad Ever.”  Then you get a shot of best dad ever in the blue jean short-shorts cut off just below the buttocks line.

“I was absolutely going for shock value and a little bit of embarrassment,” the Daisy Dukes-wearing dad explained.

What do the femme-a-gogues [Mike: Or as I call them, the members of Gal-Qaeda.] at Jezebel think? Something to do with oppressive phallocracy or something. Also? Down with the “tyranny of modesty” for teenage girls!

Mike:  This has caused a bit of furor on the social media internet with people wondering what precisely is wrong with encouraging teenage girls to be modest.  There’s certainly not enough modest and certainly enough humility to go around these days.  We talk about this incessantly on this show, about modest and humility, mainly about humility and how we don’t have any or have very little.  Just look at our foreign policy as a country as the greatest example that you can point to.  Look at the lack of humility in the choosing of the new chief of the Federal Reserve board, who was going to be Larry Summers until Summers went: Wait a minute, I don’t want this job!  Who on Earth would want this job?  Now some woman named Yellen is the frontrunner to be the world’s central banker.  Don’t worry, folks, we live in a free country.  We don’t have a market-based currency system.  We don’t have a constitutional currency system any longer.  But we live in a free country.  I’m going to talk more about this as soon as we finish this story.  Back to the short shorts story and the feud between women and men who want to see their teenage daughters and the clowns at Jezebel that do not.

Parents have a wide range of views on what’s appropriate for children, but even after reading the post, we’re missing what’s “dangerous” about wanting teenage girls to know that their worth doesn’t come from flashing underbutt when they walk.

Mackintosh wrote in a blog post that there was no “Dad, I get it” moment after he donned the skimpy shorts. But he also told the “Today” show that “his daughter has been better about her choice in shorts.”

“My daughter will always know that her dad loves her and cares about her enough to make a fool out of himself,” he wrote.

Mike:  Jezebel tweets that the father is pursuing a “dangerous agenda.”  Really?  I have to ask the same question that these people asked and our friends over at Breitbart News, Mary Chastain, asked.  I don’t know if you know Mary Chastain, but she tweets under the name Redness from Breitbart.  She answers back to Jezebel “Excuse me? Dangerous? Are you serious? RT @Jezebel: Short-shorts-wearing dad pushes dangerous ‘modest is hot’ agenda.”  There are some other comments here.  I think the big question here, or the way I would phrase the question, looking at this from a distance and just thinking about it in terms of, number one, a dad of teenage daughters, which I am and many of you are, or mothers of teenage daughters, and then thinking about the social media cesspool that these kids operate in.  Let’s not be naïve.  It is nearly impossible if not impossible to shield your youngin’ from the influence of social media.  I don’t know that it’s totally necessary that you shield them.  I think maybe monitoring them is preferable rather than trying to accomplish the impossible, which is to just not allow them to use it.  No, that’s not the whole: Give them a condom because they’re gonna do it.  It’s ubiquitous, folks.  It’s on every phone, every computer, every television screen.  We live in a media world whether we like it or not.  They’re going to be exposed to this.

I think the question, though, is a deserved one.  What ever happened to teaching and encouraging young ladies to be modest?  I believe one of the terms we used to use to describe this modesty was demure.  How many of you people have used the term demure in a sentence applied to your daughters.  I might have used it to describe something to my daughters: You need to be a little bit more demure in that.  It used to be that you would describe your teenage girl, and let’s hope you were using that kind of terminology, to describe those that, as they age into adulthood, that we should wish for and want to be the most modest.  After all, they will become the mothers of the next generation of humans.  They will become the mothers of the next generation of Americans or Louisianans or Marylanders or Texans or whatever the case may be.  If you look at it through that prism, why would you not teach them or encourage them to be anything other than modest and humble?  Do you want a bunch of Linda Lovelaces running around?  Here’s a question: Do you want an entire generation of Miley Cyruses running around as the mothers of the next generation?  At some point in time, Miley Cyrus will probably have children, and will be confronted with her past.  Let’s hope someone confronts her with her past.  Do you want or should we desire modesty, humility?

I saw a great explanation of this.  I’ll have to go to the Twitter feed and look it up because I didn’t write it down.  A great explanation of this, of teaching your daughters and encouraging them to not experience the licentiousness of the sexual revolution until they have experienced the beauty of the sacrament of marriage.  I say sacrament in the Catholic sense of the word because there are I believe seven sacraments.  Sacrament is Latin from sacramentum, which is Latin for gift.  There’s another gift there after the humility and modesty, and that’s the gift of the acceptance or entering into the covenant of marriage, under which families are raised.  As I said, those young girls someday become the next generation of mothers.  It will be their job to then take the generation that they will create and teach them.  Shouldn’t you teach then?  Shouldn’t you always err on the side of pursuing perfection, of pursuing things that 8,000 years of recorded human history have been handed down to us and we can look at and say: That produces better results than that.  That’s how a tradition becomes a tradition, because it’s good, it produces good things, results.  You would want to stick to or pursue those things that are traditionally good.  I think that’s probably as close to an explanation of why the short shorts dad is probably a lot better for his daughter and for daughters in general than the website Jezebel ever will be. 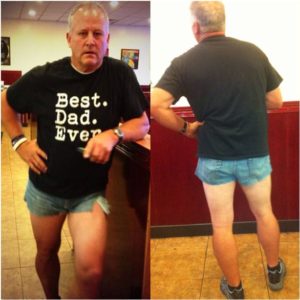