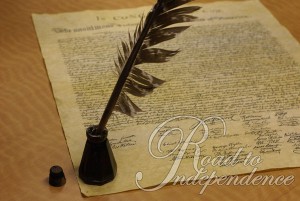 Mandeville, LA – This Clip of The Day was originally aired and published on Jun 1, 2009 and is part of the Founders Pass Flashback Collection. We’ve spoken to him before, but 11-year-old Chris from Maryland never ceases to amaze the Mike Church Show crew.  From his obvious intellect to his grasp of Constitutional principles, we often wonder what we can do make more kids like him!  Today, Chris called in for some clarification on the Declaration of Independence. Specifically, there were pieces of that treasured document that dont seem to match what he learned from listening to Mikes heralded docu-drama, The Road To Independence. Mike explained that standard teaching about the Declaration avoids some basic facts about the United States of America seemingly on purpose.  After all, who wants the youth of today to really understand whats happening in our country and that they can actually stop it?  After Chris noted, I wondered why they didnt put it all in my book?  Mike offered, They didnt teach you that because they dont want you to know that states are really little countries.  After a little more back and forth, young Chris joined Mike in reciting the Lee Resolution, which reads: That these United Colonies are, and of right ought to be, free and independent States, that they are absolved from all allegiance to the British Crown, and that all political connection between them and the State of Great Britain is, and ought to be, totally dissolved. After hearing Chris performance, Mike only offer a simple, Give this kids a medal.  He did one better he rewarded Chris with a copy of his other documentary, The Fame of Our Fathers.

0Shares
Daily clipDeclaration of Independence
Previous PostThis is Obama’s Hope and Change? Flashback AudioNext PostACLU To Catholic Charities: Worship Beazelbub Or The Kid Gets It