Mandeville, LA – Exclusive Transcript – Juliette Turner, the 14-year-old daughter of Janine Turner, is already an author of a new book called “Our Constitution Rocks”.  Juliette certainly knows more about the document signed today by our Founders than our Commander-in-Chief and most of the men in Congress as well.  Check out Mike’s interview with Juliette and a link to her excellent book…

Mike:  Back to our Dude Maker Hotline on the Constitution Day extravaganza.  Let’s talk to Juliette Turner, daughter of actress Janine Turner and author of a new book out called Our Constitution Rocks.  Young Ms. Turner is but 14 or 15 years old, Juliette?

Mike:  Fourteen years old and already an author.  Welcome aboard.  How are you today?

Mike:  Same to you.  So why pick up the author’s pen to write a constitution book at age 14, I must ask?

Juliette:  Well, three years ago my mother read the Constitution to me during my spring break.  It sparked an interest in me to learn more about our country’s founding documents.  Then I became the national youth director of my mother’s foundation Constituting America.  We were actually just in Philadelphia celebrating Constitution Day with the winners of Constituting America’s annual contest.  You can find more on that at ConstitutingAmerica.org.  I began as the youth director and saw how little my generation really knew about the Constitution.  It concerned me.  We are the future of our country.  We’re the future voters.  If we don’t know about it, then we won’t know when it’s in danger, won’t know how to protect it.

Mike:  I’m intrigued because I haven’t received my copy yet.  Can you give me a clause that you translated, that you’ve committed to memory, so that your generation understands it better?

Juliette:  One of my favorite clauses — I love all the clauses in the Constitution that we know very little about and take for granted every day.  One of them, I believe, is Article I, Section 9, Clause 2, and that protects our Writ of Habeas Corpus, which means you can’t be just thrown in jail and left in there and not addressed for your crime.  I love that because we take that for granted.  Almost everyone today doesn’t know, unless you’re a constitutional scholar, you don’t know what’s in the Constitution.  We take for granted that we have the Writ of Habeas Corpus in this document.  Also, Article IV, Section 4, it protects statewide and nationwide our right to a republican form of government.  It’s little things like that in the Constitution that I love.

Mike:  Juliette Lewis, the daughter of — Juliette Turner, good grief.  I’m sorry, that’s an insult.  Good grief, was that an insult.  Forgive me.

Mike:  AG, you were ready to jump in there and correct me, weren’t you?

Mike:  Juliette Turner, daughter of Janine Turner, with Our Constitution Rocks, a kids’ book, a teenagers’ book.  Let me ask you, what’s it like going up against the teen wolves?  You’re a young author and you’re trying to steal attention away, Constitution Day or not, against the Twilight series, against The Hunger Games and all that.  How is that going?

Juliette:  I love The Hunger Games.  That’s one of my favorite series.  I believe that my generation actually is becoming more and more aware of the urgency of knowing our constitution, of protecting our country, of the crisis our country is in right now.  I believe that my generation really is standing up to the plate and going, “No, we’re going to protect our country.  We want to protect our rights.  We’re going to know our Constitution.”  I think it’s actually a great time right now.  I think my generation is awakening to the call of duty almost.

Mike:  True, very true.  How is the tour going?  The book came out about two weeks ago, three weeks ago?

Juliette:  Yes, it came out on September 4th.  It’s been out for a few weeks.  It’s available on Amazon.com or bookstores all across the nation.  It actually has sold out a few times on Amazon.  You might not get it right away.

Juliette:  I’ll send you an autographed copy.  I’m setting up some book signings right now and doing some other press.

Mike:  Are you having to take time out of school?  Is mom tutoring you on the road?  How is that working out for you?

Mike:  You concur?  I had to get a second from my producer.  Are you up to the challenge?  Will you debate the President on the Constitution?

Mike:  That’s funny.  Well, we’re going to send the invitation.  We’re going to try to make this happen.  I think it’s apparent you probably know more about the document than 98 percent of the Congress.  As a matter of fact, is one of your tour stops to go to the Capitol to teach a class?

Mike:  You got my vote.  Juliette Turner, her book is Our Constitution Rocks.  It’s written by, as you can hear, a teen for teens.  It sounds to me like there’s a lot adults could learn in it today.  Juliette, best of luck to you.  I will be looking for my autographed copy in the mail.

Juliette:  Yes, I will send one to you, definitely.

Mike:  I will send one back to you.  I’ve got a couple movies on the subject you might enjoy.

Juliette:  Thank you so much.  Happy Constitution Day!

Mike:  Same back to you. 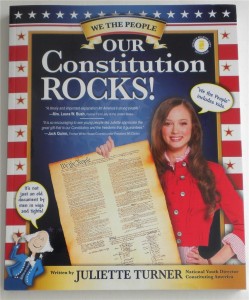 That is what we need to hear.I an 16 years old and I wish
this could be happening to day.

Think you for writing that.