Mandeville, LA – Exclusive Transcript – In his first season, he shows up there in May, at the end of the last school year, sets up his office.  He’s told he needs to go to this little town in Alabama to recruit this kid who’s an offensive lineman.  So he goes to this little town and can’t find this address he’s looking for.  He’s a football coach for a major university, so he’s got a coat and tie on and, of course, his hat.  It’s around lunchtime and he can’t find any place to eat.  Check out today’s transcript for the rest…

Mike:  In the same vein of what we’re discussing right now, I read a most intriguing story yesterday.  Let’s just talk about values for a moment.  I just gave the president a B- for a value and for being at least a little chivalrous and virtuous and not throwing his secretary under the bus.  Andrew, did you see the ESPN interview where Les Miles runs the red light?

Mike:  You haven’t seen this!?

AG:  Is it like they have a camera in the car and they’re filming him, that sort of thing?

Mike:  Yeah.  It’s him and this reporterette.  They’re driving around Baton Rouge.  It’s about two and a half minutes into the video.  It’s hysterical because she says: You just ran a red light!  He goes: No, no, I anticipated the red light.  You didn’t see it change because I anticipated it.  It’s one of the video things that you kind of have to see it.  It wouldn’t be adequate for me to try and describe it.  You have to see it.  It’s a humorous little story to brighten your day for just a moment.  Somebody posted a comment underneath the video of Miles.  For all of you Bama fans out there, let me throw you a bouquet.  Somebody posted a comment and retold a story.  He quoted it but he didn’t give the source.  I’m going to go on the assumption that this story is true.  It was about Paul “Bear” Bryant from the 1960s, when he first went to the University of Alabama to be the head coach.

In his first season, he shows up there in May, at the end of the last school year, sets up his office.  He’s told he needs to go to this little town in Alabama to recruit this kid who’s an offensive lineman.  So he goes to this little town and can’t find this address he’s looking for.  He’s a football coach for a major university, so he’s got a coat and tie on and, of course, his hat.  It’s around lunchtime and he can’t find any place to eat.  He sees this gray cinderblock building that just says “Lunch” on it.  He goes in there and sits down at the counter.

A great big Alabama boy comes from the back and says: Can I help you?

Bear Bryant says something to the effect: Yeah, I’d like to have some lunch; what’s on your menu today?

The restaurateur says, looking at Bear Bryant in this Podunk Alabama town dressed in his suit and tie and hat: I don’t think there’s anything in here that you’s gonna like.

Bear says: What are you cooking?  It smells good.

AG, do you know what chitterlings are?

Mike:  Gizzards, livers, all the stuff that you don’t buy when you buy chicken at the store.  It smells to high holy heaven when you cook it in a house, trust me.  I don’t cook it, but I’ve been in places where they do.

He goes: All right, suit yourself.  He serves him his lunch and he eats his lunch.  The old boy comes back and says: Can you tell me, what are you doing in this town, son?

Bear Bryant says: I’m the new coach at the University of Alabama, a football coach, and I’m looking for . . . he pulls this piece of paper out of his pocket and says: Maybe you can help me find this.  I’m looking for this young man.

Bear Bryant says: I can’t because I just started, but if you give me your name and your address, I’ll send you one.  They say goodbye and he takes the address.  He gets back to Alabama and after he gets his publicity photo made, he autographs one and writes on it: To such and such, thanks for the best lunch I ever had.

Fast forward 25 years.  Bear Bryant is going back to the same town to recruit again.  He goes to this kid’s house and he’s going to recruit this kid to be a defensive lineman.  He sits down with a kid and his mother and father.

The kid is kind of nervous and fidgety and says: Well, coach, I gotta tell you, I’m not going to Alabama.  I got a better offer from Auburn.  I’m going to Auburn.

Bryant’s like: Are you sure, son?  You sure you want to go to Auburn?

He gets back to his office and the next day the phone rings.  It’s the kid that just told him that he’s going to Auburn.  The kid says: Coach, this is such and such.  Is your offer still good to come play defensive lineman for Alabama?

Bear Bryant says: Why son, yes, it is.  We’d love to have you come play defensive line at Alabama.

He said: Coach, I’d like to accept your offer.  If you give me another chance, I’d like to come play football for you.

Bear Bryant says: Okay.  What made you change your mind?

He said: Well, coach, after you left, we went to go celebrate.  We went to my grandpa’s restaurant.  We told Grandpa that I had turned you down and accepted the scholarship to go to the University of Alabama.  Right there in the middle of the restaurant, Grandpa threw the biggest fit we’ve ever seen him throw.  He insisted that I rescind taking the offer from Auburn and go to play football for Paul “Bear” Bryant.  He pointed to a picture that was on the wall that was signed by you and said, “Thanks for the best lunch I ever had.”  He said: Since the day that picture arrived, that has been his pride and joy.  He points it out to everyone that ever comes into the restaurant.  He told me, coach, if I had the chance to play for a man with your character, I would be doing myself and my family a great disserve if I didn’t seize the opportunity.  So that’s why, because Grandpa insisted.

Isn’t that a great story?  Bryant says he tells all his coaches: You gotta remember the little things, boys.  When you’re out there in public, when you’re recruiting, when you’re dealing with families and our players, you gotta remember the things your momma taught you.  I remember the politeness and honor that my momma and my father taught me, that if I made a promise to a man, if I told him I was gonna do something, I did it. That was the whole thing, he went back to his office, didn’t forget, and sent that man the picture.  That picture paid dividends 25 years later.  Ain’t that a great story?

AG:  Yeah, that’s amazing.  He’s got a long list of stories that evoke that same kind of message.

Mike:  I read that story and that’s a Southern gentleman there. 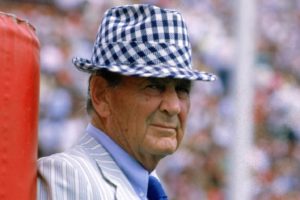 Monday Pile of Prep-Manliness Makes Is Making A Comeback!

Veritas et Sapientia-Time For The New Knights To Arise And Save Their Country!