Mandeville, LA – Exclusive Audio and Transcript – On days like today when people have thrown the founders out and have thrown out “the government is too big,” well, the government is too big because you demanded it be too big.  You people that demand this $1.2 trillion defense force are demanding $1.2 trillion worth of government.  Like it or not, the soldiers aren’t the ones that consume the bulk of that $1.2 trillion.  I’ll tell you who does: the defense contractors, the bureaucrats at the Pentagon and all the other apparatchiks out there.  Are they part of the government?  [mocking] “They’re the good guys, Mike.  Come on, they keep us safe.”  We spend 46 percent of the planet – let me rephrase that – 46 percent of what the known universe spends on “defense.”  Does that sound defensive or does that sound offensive?

“It is always dangerous to draw too precise parallels between one historical period and another; and among the more misleading of such parallels are those which have been drawn between our own age . . . and the epoch in which the Roman Empire declined into the Dark Ages.  Nonetheless certain parallels there are . . . A crucial turning point in that earlier history occurred when men and women of good will turned aside from the task of shoring up the Roman imperium and ceased to identify the continuation of civility and moral community with the maintenance of that imperium.  What they set themselves to achieve – often not recognizing fully what they were doing – was the construction of new forms of community within which the moral life could be sustained so that both morality and civility might survive the coming ages of barbarism and darkness.  If my account of our moral condition is correct, we ought also to conclude that for some time now we too have reached that turning point. . . . This time, however, the barbarians are not waiting beyond the frontiers, they have already been governing us for quite some time.  And it is our lack of consciousness of this that constitutes part of our predicament.  We are not waiting for Godot, but for another – and doubtless very different – St. Benedict.”

MacIntyre’s “account of our moral condition” basically concludes that our individualism, and with it the belief in subjective emotion as a guide to truth, has led inevitably and irretrievably to a loss of a common culture, and a common reference point, or set of reference points, for strong community.  This has moral, religious, social and economic effects.  This is my theory of American decline.

Mike:  I’m reading from Rod Dreher.  I appreciate the piece, Rod.  I think  he’s onto something here.  I think American decline began with the rise of American nationalism, jingoistic, arrogant, conceited nationalism, and we are über possessed of it today.  Let’s talk to John in Connecticut.

Caller John:  Number one, I agree with your reading from that individual.  As a 67-year-old American who still works and still pays taxes, I believe that in my short lifetime, as a boy, things such as illegitimacy of birth, food stamps, welfare, etc. was something that was never brought out into the public.  I remember even to the point where when my mother was pregnant with my sister, she wore a moo moo and the word pregnant was never used.  It was PG.  Let’s fast forward in history to the ‘60s when everything was thrown out.  What was considered almost a negative was turned around to be a positive.  If you had a kid, no problem.  If you needed something, no problem.  The government, the government, the government.  Sir, in my opinion, that’s when it all went to “hell.”

Mike:  There are many people that share that conviction.  I can say that with some conviction.  I think the seeds of discord were sown long before then, but you’re right.  That’s what Charles Murray writes about in his book Coming Apart, about the state of white America 1960 to 2010.  It’s a very provocative book.  Read it if you get a chance.  You can find it in the library at MikeChurch.com.  That’s where you’ll find audio previews of my groundbreaking docudramedy What Lincoln Killed, coming to a CD player near you in a few weeks’ time.  You can read the synopsis and check out the graphics and listen to the previews we have on the website.  Tim is in Virginia.  Hello, Tim.

Caller Chip:  No, I’m Chip.  Good morning to you.  I think I heard a great talk show host say something about the scale of government.  I think that’s probably what it all gets back to, that government is trying to be the answer to all of our problems and involve ourselves in the family values and be the answer.  Because of that, there is the moral compass.  I’m only 47, but I can remember that Sundays, businesses were closed and it was a family time.  It was time to work in the yard or do whatever, but you were with your family.  That’s where you got your moral compass.  I personally believe that because of the scale of government and being out of scale, that it’s involved itself in all aspects of family life.  I appreciate you and you have a great day.

Mike:  Thanks for the phone call.  Again, what comes first, the chicken or the egg?  Do the people elect the government they want, like H. L. Mencken says, and do they get it, and when they get it, they ought to get it hard?  Do they elect people that they think are going to do different things and then they get into power and they do the exact opposite?  It’s not as if people are standing by polling booths with automatic weapons, outside of Philadelphia anyways, in Black Panther uniforms, and compelling you to vote one way or another.  The fact of the matter is, the unenlightened, uneducated government-grabbing, “It’s free; I want my share” voter is the voter.  You can’t just sit there and blame the politicians.  As George Carlin says, the politicians are chosen from American citizens, from American families that go to American schools, they sit in America’s churches and they go to America’s barbecues.  This is the best we can do, folks.

It’s hard to raise a generation of statesmen.  Does anyone have a prescription for how you would raise the next generation of statesmen?  We can talk about the founders all we want, and some of us do, but without the framework being in place of raising generations of statesmen, how do you create the leaders that are going to lead us out of this pickle?  Let’s talk about Thomas Jefferson for a moment.  I am always amazed that people love to run around and quote the founding fathers.  Yet, when I confront them with what this founder said about military empire and what that founder warned about the size and scope of military empire as being a component of big government, they call me a traitor, seditious, fake, phony, fraud, call me a liberal.  I’ve got thick duck feathers on my back, thicker than they used to be, and I just go, “Okay.  Have it your way.  We’ll see how it turns out.”

On days like today when people have thrown the founders out and have thrown out “the government is too big,” well, the government is too big because you demanded it be too big.  You people that demand this $1.2 trillion defense force are demanding $1.2 trillion worth of government.  Like it or not, the soldiers aren’t the ones that consume the bulk of that $1.2 trillion.  I’ll tell you who does: the defense contractors, the bureaucrats at the Pentagon and all the other apparatchiks out there.  Are they part of the government?  [mocking] “They’re the good guys, Mike.  Come on, they keep us safe.”  We spend 46 percent of the planet – let me rephrase that – 46 percent of what the known universe spends on “defense.”  Does that sound defensive or does that sound offensive?  [mocking] “There he goes again.  He’s going to start railing against the military.”  I’m not railing against the military at all.  I’m railing against standing armies that are threats to your security and your liberty.

I quote now Thomas Jefferson.  I just happened to read this last night and thought I’d bring the book in here and share it with you.  David Meyer, writing about the constitutional thought of Jefferson.  It goes back to 1789 or 1790 and Jefferson’s insistence that there should be a Bill of Rights attached to the Constitution.  Here’s what Meyer writes in part, and a lot of this is in quotation marks, meaning he’s getting it from letters that Jefferson wrote.  There were three specific ones, one to a guy named David Ramsey, one to Noah Webster and one to James Madison, three letters that Meyer is quoting from.  Here’s what he writes, in part:

In the earlier letter written to David Humphreys, Jefferson explained why he considered it a “defect” in the Constitution that “important rights” were not “explicitly secured by a supplementary declaration.”  His basic reason was grounded in his Whig distrust of governmental power and related particularly to his observation in 1788 that the “natural progress of things” was for “liberty to yield and government to gain ground.”  A declaration of rights, “as a supplement to the constitution where that is silent,” was needed to secure certain kinds of rights.

Mike:  Students at King Dude University, those of you that are studying here: [r]epublicanism for your first eight weeks.  Pay attention.  There’ll be a quiz on this after the program.

Jefferson described three classes of rights.  First, there are “rights which it is useless to surrender to the government, and which governments have yet always been found to invade”; these were “the rights of thinking, and publishing our thoughts by speaking or writing; the right of free commerce; the right of personal freedom.”  Second, there are instruments for administering the government, so peculiarly trust-worthy, that we should never leave the legislature at liberty to change them.”  These included “trials by the people themselves, that is to say, by jury,” which the new Constitution failed to secure fully in the judicial department.  Finally, there are “instruments so dangerous to the rights of the nation, and which place them so totally at the mercy of their governors, that those governors, whether legislative or executive, should be restrained from keeping such instruments on foot, but in well-defined cases”; such an instrument was a standing army.  Thus Jefferson revealed the reasoning underlying his choice of the six article he had earlier proposed for inclusion in the federal declaration of rights. 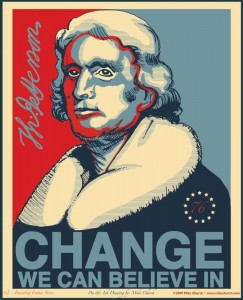 0Shares
Bill of Rightsdavid humphreysDeclinefounding fathersromest benedictThomas Jefferson
Previous PostWatch Out For the Light at the End of the Tunnel… It May Be A TrainNext PostWhen Big Box Retailers Attack: CostCo Shacks Up With Obama-Biden 2012