Mandeville, LA – Exclusive Transcript – This is a very dangerous thing that we have done.  We are flirting with disaster.  We are flirting with human misery.  We are not the exception to the rule of human nature, sir.  We are humans.  We are fallible.  Human nature does not change over continents.  In our arrogance and saying things like you just said, we make ourselves “We’re the exception.  We would never rain that kind of tyranny.”  Sad fact of the matter is that we have.  Check out today’s audio and transcript for the rest…

Mike:  George is in Pennsylvania, next on The Mike Church Show.  Hello, George, how you doing?

Caller George:  Good morning, Mike.  I’d like to take you to task for something you said in the third hour of last Friday.  You said that you were tired of hearing about American exceptionalism and all the stuff that goes along with that.  I think you fundamentally misunderstand what that term means.

Mike:  Why don’t you explain it to me?

Caller George:  I will.  American exceptionalism does not mean that America is so much better, it’s that America is the exception from the way the rest of recorded history has gone.  Where every other country, for the most part, has been a monarchy or power structure with a strong man at the top, America was the one that forged the moderate democracy republic-type form of government and is the exception.  You had kings in Germany and France and England and places like that.  We are the exception.  We are the leader, not that we are hugely, hugely better, even though we really are.

Caller George:  It’s a matter of —

Caller George:  It is not that we are so much — you’re misunderstanding the term.  It is not what people say that —

Caller George:  Because they started out as a monarchy.

Mike:  They did not start as a monarchy.  They started as Romans.  I’m trying to answer your question, or your interregnum, sir.  The Magna Carta gave birth to the idea of many things that we take granted today, did it not?

Caller George:  Yes, it did; however, that was done under a monarchy.

Mike:  It doesn’t matter what it was done under.  Why aren’t the English exceptional then?  Why don’t I hear about British exceptionalism?

Mike:  I’m not twisting the term.  I’m responding to what you — you told me that I misunderstand the term.  I’m telling you that we are not exceptional when it comes to even form of government.  Why would little Jimmy Madison and his buddies drag in volumes of Roman and Greek history to draw from when they were designing and trying to get to a consensus on how to form the government if there hadn’t been men and governments that had gone in the past they could draw from?  Why aren’t any of those exceptional?

Caller George:  Because, again, everybody else was based upon a top-down hierarchical structure as opposed to a representative republic that we built over here.

Caller George:  Sure, I understand that, but that’s a different focus from what we’re talking about here.  He is the exception to the king —

Mike:  No, it’s not.  Let me give you another great exception that we are.  We’re the only country to ever detonate a nuclear bomb and take human lives.  Let’s talk about that exception.

Caller George:  If that’s what it took to take down the Japanese to prevent us from having to invade mainland Japan, even though there may be other people who disagree with that, so be it.  We stopped them.

Mike:  You choose life but it would be okay to not choose the lives of the innocents and the civilians and the monastery that was in Nagasaki that was obliterated by an atomic weapon.

Mike:  You’re getting a mythological point of view, the “if that’s what you have to do to save more lives.”  The fact of the matter is that if you read your actual history, Harry Truman was demanding things of the emperor of Japan that the emperor was never going to accede to, and neither were the people of Japan.  Truman was the one that was being obstinate in the negotiations and finally said: We’ll just nuke them, over the objections of many in his cabinet and many in the high command in the United States Navy.  To say that we are the exception to some rules, of course we are.  There are many American citizens — I’ve always said that Americans are exceptional.  To say that we are exceptional, George, in the manner in which you are trying to get me to accept your definition and that I’m misunderstanding exceptional, this is where the danger comes in.

This is a very dangerous thing that we have done.  We are flirting with disaster.  We are flirting with human misery.  We are not the exception to the rule of human nature, sir.  We are humans.  We are fallible.  It is totally conceivable that an American can be just as despotic as a Nazi German, that an American can be just as despotic as a communist Cuban, that an American can be just as despotic of any other despot that has ever lived.  We are humans.  Human nature does not change over continents.  In our arrogance and saying things like you just said, we make ourselves [mocking] “We’re the exception.  We would never rain that kind of tyranny.”  Sad fact of the matter is that we have.  I challenge you, go to my website MikeChurch.com.  In that search bar at the top, type in “subjugation.”  Read Senator George Frisbee Hoar’s vivid and passionate opposition to the subjugation of the Philippines in 1903 and what his comrades in the Senate were about to do or had done.  As Frisbie Hoar, the great grandson of Roger Sherman draws upon the history of the United States and says we are uncorking the genie out of the bottle and we need to put it back in or we will forever lose our liberties.  I tend to think that Frisbie Hoar was correct.

While we’re on the subject here of being exceptional, and since George thinks we are exceptional under the definition that he tried to explain to me, Robert Nisbet wrote a wonderful essay back in 1984 called “Cloaking the State’s Dagger: The history of political thought is a history of one euphemism after another to disguise the naked power of the state.”  We have a state that has naked power.  We basically live in a quasi-police state, almost a de facto one.  We certainly have a citizen police state, meaning that with video cameras and surveillance all over the place, it’s the citizenry that can rat out the fellow citizen for his or her alleged transgressions.  We see it every single hour of every single day.  Go to thesmokinggun.com for an example.  Follow TMZ on Twitter for an example.  Nisbet was just brilliant.  He wrote a book called Quest for Community.  It’s in the library at MikeChurch.com.  It is a fantastic read. 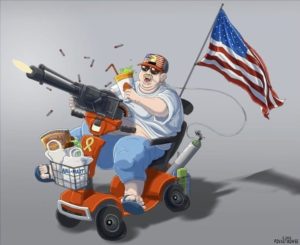