Mandeville, LA – Exclusive Transcript – So Monroe never leaves the service of the United States.  Remember, he gets in in 1776, gets out as president in 1824, still stays on — I can’t recall the exact title he took or the task he accepted — all the way up till his death.  I believe he dies in New York City as part of some commission that he’s been appointed to.  He never leaves public service, as you government employees call it today.  Check out today’s transcript for the rest…

Mike:  The story is the untold story of the life and times of one James Monroe.  You may wonder: Why would you pick Monroe?  There are great reasons why you would pick Monroe.  I could pick John Quincy Adams, but I’ll pick Monroe because  I know Monroe’s story better than I know Quincy Adams, even though the Massachusetts Historical Society that runs the John Quincy Adams Twitter feed does follow yours truly on Twitter.  We have communicated a bit because we’ve done research on an episode in JQA’s life when he fell into Tiber Creek and almost drowned that I turned into a Project ’76 webisode.  Enough about that.

So it is 1775 and George Washington is appointed by the Continental Congress as the Commander in Chief of the Continental Army.   He is sent immediately to Boston.  He is sent there because Boston is occupied by the British.  William Howe, I believe, is running the martial law part of the town of Boston, aided and assisted by General Thomas Gage, the despicable Gage.  Washington is sent to take Boston back.  That’s his first assignment.  He does pull this task off.  It takes him a little less than a year to figure out how to do it.  That’s another tale in and of itself.  When Washington is told to leave after the Battle of Prospect Heights — which wasn’t really a battle, it was a bluff — and Howe set sail and leaves Boston.  John Hancock and company are convinced that Howe’s brother — there are two Howes.  There’s Admiral Lord Howe and there’s General William Howe.  John Hancock is president of the Continental Congress.  He is convinced that the Howes are going to stage their next assault on New York.

Mike Church Show Transcript – Where Did Congress Get The Power To Fund Anything And Everything Under The Sun?

AG, remember yesterday I talked to the gentleman who called from Long Island and I asked him if he knew the history of Long Island and the Battle of Long Island.  This is an integral part of the Revolutionary War history.  Washington is dispatched to go to New York.  On his way back from New York, he is joined by the then-17-year-old James Monroe.  Monroe enlists.  Monroe, at the age of 17, is in the Continental Army.  He crosses back across the river into New Jersey with Washington as Howe and company are chasing him.  They ultimately retreat back on the southwestern side of the Delaware River, in December.  Monroe is in the boat with Washington when he crosses the Delaware River on the fateful evening of Christmas Eve 1776.  Most of you people know the rest of the story.  Washington and the men that make the crossing of the Delaware go in and defeat the Hessians at Trenton, take Trenton back, and it motivates enlistments for the patriot cause.  The rest, as they say, is history…

Well, the rest is not as they say history.  Upon Monroe’s entry into Washington’s army — Monroe was reported as the only casualty to this day — AG, did you know — I don’t want to say it was Major Rawle but it was a Hessian — did you know that Monroe was buried with a musket ball still implanted in his left shoulder that he received at the Battle of Trenton?  Did you know that?

AG:  I did not know that.  It’s kind of hilarious.

Mike: Back in those days they didn’t have modern surgery so they couldn’t figure out how to get it out.  If you were to go exhume the body of President James Monroe, you’d find a musket ball somewhere in his left scapula.  It’s still there.  Monroe is one of the only men that’s reported injured at the Battle of Trenton.  He begins his service in the service of the United States at the tender age of 17.  He takes a musket ball after Washington’s crossing at the Battle of Trenton.  Monroe never leaves the service of the United States, even after he retires as president.

Think about this.  He gets in in 1776.  Fast forward to 1824 and there’s Monroe serving out the final year of his second term as president.  By my count, that’s 50 years, not 25, not retiring at 20 years plus one day because you’ve done such toil in public service at the IRS or FDA or Department of Agriculture or whatever agency it is you have worked inside of and have dreamed up ways to harass the rest of the population.  Not only has he served his country, he served his country for poor pay.  He ran up tens of thousands of dollars of debt that he was never reimbursed for.  He’s sailed the mighty Atlantic Ocean on at least two occasions on behalf of his country, one you people know very famously.  He was in on the treaty that ultimately granted to us the purchase of what we call today Louisiana, Arkansas, and whatever else was part of the Louisiana Purchase.  Monroe was one of the negotiators of that treaty.

So Monroe never leaves the service of the United States.  Remember, he gets in in 1776, gets out as president in 1824, still stays on — I can’t recall the exact title he took or the task he accepted — all the way up till his death.  I believe he dies in New York City as part of some commission that he’s been appointed to.  He never leaves public service, as you government employees call it today.  He’s beyond broke.  Monroe leaves a mountain of debt, as Jefferson did as well, but Jefferson was a little more careless in racking it up.  Monroe leaves a mountain of debt that his children cannot repay.

When they start rifling through the receipts in his journals, they discover that most of the debt was incurred in the service of the United States, in other words when he was president, when he was sent overseas on trips and what have you.  Back in those days, it wasn’t all flying on Air Force One and what not.  You’d probably pay your own way and then try to get Congress to reimburse you.  So James Monroe’s children, after he dies, wishing to pay his debts off, had to go in front of the Congress and beg and plead with Congress to repay their father’s debts.  As they point out: These really aren’t his debts.  These are your debts.  You guys ought to pay this.  He didn’t need to go have a vacation in France and have to pay his own way over there.  Your president sent him over there.

My point is, which of the two is actual patriotic service and duty?  Is it the life and times of James Monroe?  As I said, I could also tell you the story of John Quincy Adams.  I could tell you the story of George Washington, who passed away a mere three years after he left his second term as president from an acute case of strep throat.  Is that the model?  Do you think that is and ought to be the model for patriotic governmental service, or should the model be the story that we have here today about the IRS drawing criticism because it’s got $70 million worth of employee bonuses to pay out?  It seems to me that the difference between the days of Monroe and Washington and John Quincy Adams and today is that government is big business, it pays well, and it’s a lot easier than actually working for a living. 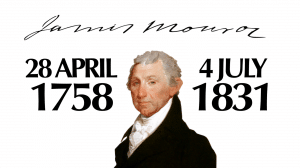