Mandeville, LA – Exclusive Audio and Transcript – This Clip of The Day was originally aired and published on May 24,2012 and is part of the Founders Pass Flashback Collection.

Mike:  Our country is filled with lazy, petulant, materialistic, self-serving, obese, dysfunctional people that are incapable of governing themselves and have to be led about by our almighty federal overlord elite masters.  Dr. Birzer and Winston Elliott who runs the Imaginative Conservative website, they both chuckled and thought that that was a really folksy but crude way to put it.  They laughed.  Do you know who I was quoting?

Mike:  John Adams.  In his defense of the Constitution of the United States, that was Adams’ views of the people of the United States in 1792.  That’s what he thought of us.  That’s what he thought of his generation: petulant, lazy, self-serving, lazy, incapable of governing themselves, fat, materialistic.  That was Adams’ view of us.  As soon as he wrote that and as soon as guys like John Taylor of Caroline got ahold of it and went, [mocking] “What?  Hey, fat boy, who you talking about?” it was on.  Adams’ star was on the way down and it never rose again, even though he was elected president in an electoral miracle.

The point is that there has always been and always will be political strife.  There have always been and always will be disappointments.  This is part of life.  You don’t get your way and everything that you want to do.  I’ve mentioned this before, last hour I mentioned it, Jefferson, if you read his correspondence the last three or four years of his life, was positively bummed out, depressed.  He was convinced that he was a massive, total failure.  He wanted it to be known, [mocking] “I didn’t have anything to do with a lot of this.  There are only a couple things that I had something to do with.  I wrote the Declaration.  I wrote the Virginia Statute for Religious Freedom, and I established the University of Virginia.  The rest of that, you ain’t hanging on me.  I had nothing to do with it.”

I just want the audience to think about that for a moment.  Jefferson listed none of his federal accomplishments on his obelisk, which you can still visit this summer, if you want to, at Monticello.  AG, have you been to Monticello?

Mike:  Ask Eric.  Young Eric, have you been to Monticello?

Mike:  Have you seen the Jefferson family graveyard where the obelisk is?

AG:  He believes he has.  He’s not positive, though.

Mike:  In the opening scene of The Road to Independence, the movie, there is a shot of the obelisk that we had drawn.  As a matter of fact, the camera passes through the gate and it’s a pretty accurate representation of the gate.  Those are the things that Jefferson wanted on his tombstone.  Notice that he was president, not on there.  Louisiana Purchase, not on there.  Repeal of the Alien and Sedition Act, not on there.  Interesting the way he wanted posterity to remember him.

This process that we are currently going through, this is not a new one, ladies and gentlemen, it’s not.  Don’t think that we’re the first generation to be politically dissatisfied and displeased.  Imagine if you were a republican around 1798 and you got news that these acts called the Alien Friends Act and the Sedition Act had been passed, and not only did it come out of a congress that had been elected by the people, but it was signed by a president that was basically elected by the people’s electoral college.  This is what you fought a revolution over, so John Adams could finger you and hold you out for retribution like he did a congressman from Vermont and have you imprisoned because you said something against his administration?  Are you kidding me?

Imagine how they felt, [mocking] “Man, what happened?  The wheels are coming off.  We had this guy Jefferson back in ’76, dude.  We had this declaration thing.  We passed it.  We all voted.  Washington beat Cornwallis at Yorktown.  Now you get locked up because you oppose the Adams Administration?”  They were positively apoplectic over this.  They thought it was over.  This is why they were having secret meetings.  You’ll learn all about these meetings that they had, as much as we can tell you, because they didn’t leave much evidence, to plan the Virginia and Kentucky Resolutions to do something about it.

You know what’s a great exercise if you want to do something founding father, want to read some good source documents?  Look up Virginia and Kentucky Resolutions, 1798.  As a matter of fact, I’ll do it for you.  I’ll post them in the Liberty Archive or in the Founding Fathers Corner on the website so you can read them for yourself.  Read the first paragraph and tell me how pleased you believe Thomas Jefferson was in 1798 with what he helped to bring about.

1. Resolved, That the several States composing, the United States of America, are not united on the principle of unlimited submission to their general government; but that, by a compact under the style and title of a Constitution for the United States, and of amendments thereto, they constituted a general government for special purposes — delegated to that government certain definite powers, reserving, each State to itself, the residuary mass of right to their own self-government; and that whensoever the general government assumes undelegated powers, its acts are unauthoritative, void, and of no force: that to this compact each State acceded as a State, and is an integral part, its co-States forming, as to itself, the other party: that the government created by this compact was not made the exclusive or final judge of the extent of the powers delegated to itself; since that would have made its discretion, and not the Constitution, the measure of its powers; but that, as in all other cases of compact among powers having no common judge, each party has an equal right to judge for itself, as well of infractions as of the mode and measure of redress.

Mike:  That, from the pen of Jefferson.  That is as mighty a statement as is contained in the Declaration of Independence.  You want to know where my constitutional thought comes from?  Bam, right there.  It doesn’t get any better than that.  It doesn’t need to be any more complicated.  That’s all of it in a nutshell, that paragraph right there.  That says that the people created their states and that they reserve all the powers of government to themselves and that they chose, voluntarily chose, to delegate some to their governments, and then their governments chose, in concert with them, to make a compact among the other states.  That compact resulted in the Constitution, and that the Constitution is the book.  It is the law.  That’s what it is.

The general government can’t make its own rules up because it doesn’t have the authority to.  At any time the people feel like it, they can take the power back or they can just tell the government no.  Let me think here.  EPA?  How about no?  You don’t have the authority.  Get out of my state.  Get out now.  The general government can’t be the judge of its own powers, which is why when people mock me or laugh at me or send me snide letters, [mocking] “You say we don’t have to obey the Supreme Court.  Well, bucko.”  Bring your case up with Thomas Jefferson, sir, because that’s what Jefferson is saying.  General government is not the sole judge of its own powers.  We have as much power to say whether it’s right as it does. 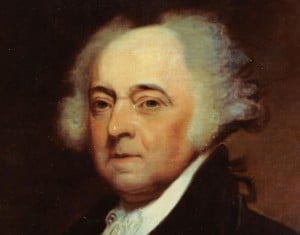 0Shares
founding fathersjohn adamskentucky resolutionsmonticelloThomas Jefferson
Previous PostWhat Do Local Sheriff’s Need Drones For in the Land of the Free, Mobile Home of the Brave?Next PostTime For A Jeffersonian Rebellion