Mandeville, LA – Exclusive Transcript – If you’d really like to be learned about this, go take your Google browser and download the entire document that is today known as the Bill of Rights.  Download it and that includes the ratification instructions and the preamble that goes along with it.  Come back and tell me that that amendment you cite is pointed anywhere other than at the new general government, which was just meeting for the first time in New York City in 1789.  It’s pointed at them, sir, end of story.  That’s who it’s pointed at.  It’s not pointed at the state. Check out today’s audio and transcript for the rest…

Mike:  Jeff is in California, next up on the Mike Church Show, Sirius XM Patriot Channel.  Hello, Jeff.

Caller Jeff:  How you doing, Mike?

Caller Jeff:  Educate me.  I’ve been listening to Sirius now for three months.  It seems to me that you, sir, are recommending to our government that if they’d like to ban our weapons or guns, to do it at the state level and there it can be done.

Mike:  Yeah, Jeff, that’s what I said.  I recommended that they should ban your weapons.  That’s exactly what I said, verbatim.

Mike:  Jeff, I don’t know where you’re hearing this, but you’re not hearing it from me.

Caller Jeff:  From you.

Caller Jeff:  Here’s what I’m saying.  The right to bear arms shall not be infringed for the people, that’s us, you included.

Caller Jeff:  That can be banned at the state level.

Mike:  No, Jeff, no.  That’s not what it says.  What it says is — if you’d really like to be learned about this, go take your Google browser and download the entire document that is today known as the Bill of Rights.  It was not known as that then but it is now known as the Bill of Rights.  Download it and that includes the ratification instructions and the preamble that goes along with it.  Come back and tell me that that amendment you cite is pointed anywhere other than at the new general government, which was just meeting for the first time in New York City in 1789.  It’s pointed at them, sir, end of story.  That’s who it’s pointed at.  It’s not pointed at the state.  Does that mean that I think you don’t have a right to defend yourself?  Come on, man.

Caller Jeff:  I keep hearing this message from you over and over again, that the states have the right to take our weapons.

Mike:  The states have the right to regulate, to make regular.  Let’s just say, for example, they choose to pass ordinance where they say blind people cannot purchase ARs, do you have a problem with that?

Caller Jeff:  Yeah, because that starts down a slippery slope.

Mike:  No, no, everybody has the right.  Why can’t the blind guy have the right to defend himself?

Caller Jeff:  I have no problems with blind people buying a rifle.

Mike:  Great.  And you don’t have any problem with them shooting them when you’re in close proximity?

Mike:  No, it’s not.  How about the mentally deranged?  How about those that have been psychiatrically evaluated and proven to be criminally insane or nutso, yet they’re roaming the California —

Caller Jeff:  How about former Marines?  How about the general public?

Mike:  Jeff, I’m asking you very simple, reasoned questions.  How about the mentally deranged?  Do we have a problem with them purchasing a firearm?

Caller Jeff:  Of course we do.

Mike:  Okay.  How about the children that are born and, through no fault of their own, may have suffered some kind of a mental birth defect and cannot tell right from wrong?  Should we allow them to go off to Wal-Mart and buy a weapon?

Mike:  No, I don’t know, because you told me that I am a gun banner.  I’m simply telling you —

Caller Jeff:  No, it seems to me you’re informing the state legislators how to get this done.

Mike:  Yeah, Jeff, I’m in on it.  Stephanie Cutter, President Obama’s campaign director, she bought me a Maserati to do this.  Did you know that?

Mike:  It’s awesome.  It’s a black convertible.  Jeff, I was paid off.

Caller Jeff:  Are you saying the states can just take the weapons from us, forget about the Second Amendment?

Caller Jeff:  Well, Patriot listeners, bury your weapons and wait for the word.  That’s all I got to say. 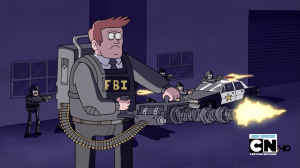 I am prior Marine Corps Infantry and maintain great affinity for my firearms. I failed to realize I was an incorporationista until I followed the aforementioned instructions regarding the Bill of Rights, augmented that erudite wisdom with additional scholarly reading, and continued daily red pill doses (generally on demand). I also took an oath to uphold the Constitution, without any real understanding of the document as a condition of my service. To my current frustration, I have undertaken reading “Control” by a less scholarly media type, and have found it to be nothing but an exercise in using [r]epublican logic. The first few pages are alarming because sheeple digesting this work will never realize or accept the wrong arguments prevail. Sure there are good points, but they should all be argued locally, not nationally. The role of the general government should be the centerpiece of debate and letting localities govern themselves, not letting my beliefs shape overreaches.

Caller Jeff isn’t ready to have the matrix cable unplugged. He cant understand because he is still indoctrinated by the education system that teaches our federal overlords are our masters and states are just useless levels of government. He needs to calm down, and listen for a while. Like you always say, it takes 8 weeks of the founders red pill. Callers should not call in unless they have been listening for at least 8 weeks of the entire show – which THANK GOD you are on Sirius OnDemand so I can listen! Keep Calm and take the Founders Red Pill!

I understand caller Jeff. His concern over loss of freedoms, specifically the right of self-defense, and bearing arms, in his State. When we come to the point of the discussion when callers like Jeff take a position of “its a slippery slope”, then one can see the issue, and the break in his argument. As Mike pointed out that a the sovereign State may regulate firearms, as the BOR is not applicable to the State. Mike gave the clear example of the State regulating the blind man for purchasing a gun, thus leading to the “slipper slope” argument, or a continuum fallacy (getting from A to C without a B, in an abrupt fashion, without transition, while supposing an outcome). I try very hard to listen and understand at points in discussion like that, a point that breaks logic. This is that time when the listener can come to the understanding of King Dude. Mike uses a logic that flows from one point to another, which gives credence to his title “King Dude”. I guess we all need a little verbal hand holding to make the transition. Mike, you should have a honorary Phd in [r]epublicanism, so you would be Dr. King Dude…