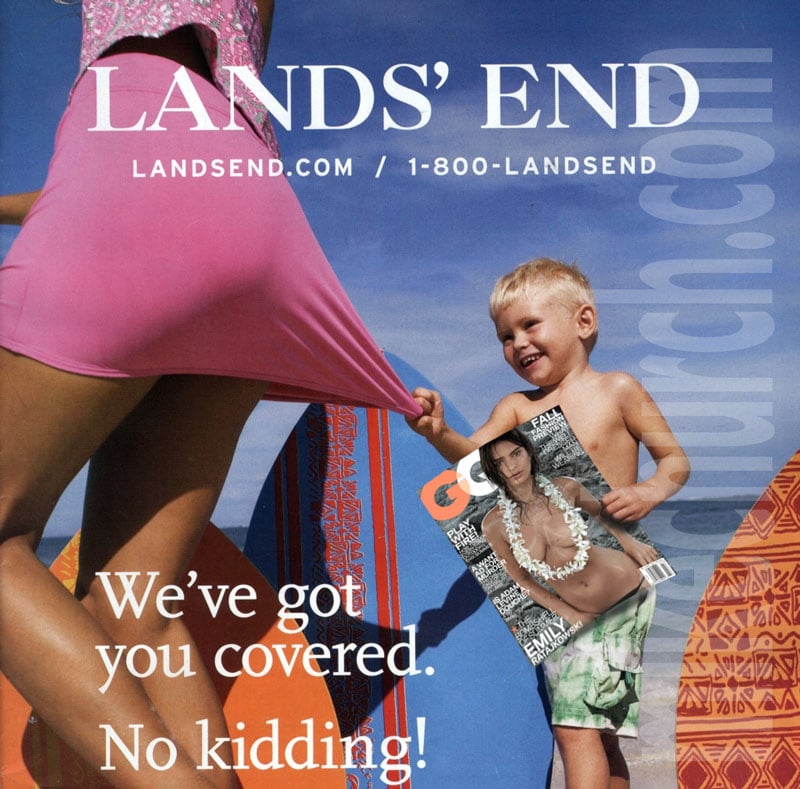 Mike:  Back to the telephones, Owen.  We’re talking about women today and no women on hold, in a good way, I should say.  Hello, Owen, how you doing?

Caller Owen:  Good, Mike, how are you?

Caller Owen:  I agree with you [unintelligible] on the internet.  I do a lot of global warming work.  I get trolled a lot.  I get called a lot of names.  My family gets called a lot of names.  I don’t support that.  It crosses party lines, it really does.  People from both sides do it.  I’ve got to say, this whole Land’s End thing, I think if you spend $100 or more at a Land’s End, you get free magazines.

Caller Owen:  We cannot pretend like our young boys aren’t going to see this stuff.

Mike:  What if they’re young girls?  Saying that we can’t pretend like they’re not going to see it means that we’re powerless, again.  So there is no taboo, none.  There is none.

This was a GQ magazine, what some people found an offensive cover.  I’ve seen the cover.  I don’t find it offensive.  I think people need to relax a little bit when it comes to sexuality, especially with teenage kids.  I think the reason people don’t talk about teenage boys, the reason people are so uptight is because they don’t talk about it.  They want to make sex so taboo that when their prepubescent boy sees a GQ cover or anything that might be a little sexualized, the kid doesn’t know how to handle it.  I think these people are way too uptight about this cover.  I don’t see what the big deal is.

Caller Owen:  Yes, you are.

Caller Owen:  Listen to me.

Mike:  It’s not a slippery slope, it’s a cliff.

Caller Owen:  Mike, have you seen the cover of GQ?

Caller Owen:  That is not pornography.  All it is is a woman —

Caller Owen:  I’m not saying this is fun family entertainment.  What I’m saying is that you can’t —

Mike:  What are you saying?

Caller Owen:  — say this is taboo.  Kids are going to see this.

Mike:  Oh, my heavens.  Okay.  Ladies and gentlemen, I want you to witness this.  I’m going to roll the tape back here.  He said we just can’t censor taboo.  I asked you a question: Why not just sit the five-year-olds down and show them some porn then and explain it to them.  You told: Come on, Mike, slippery slope, you’re making apples and oranges.  Then you just said: We can’t censor taboo.  Two things, Owen.  I don’t know, for people like you, sir, I don’t know what a taboo is.  Is there anything that’s taboo?  Please, can you tell me, what is taboo in 2014?  Owen from Portland, what’s taboo?

Mike:  First of all, that depends on what your definition of pornography — I just explained to you —

Caller Owen:  We cannot pretend like our young boys aren’t going to see this stuff.

Mike:  What if they’re young girls?  Saying that we can’t pretend like they’re not going to see it means that we’re powerless, again.  So there is no taboo, none.  There is none.

Caller Owen:  You’re making up your own argument because you don’t have one.  You can’t say —

Mike:  Owen, Owen, Owen, please.  IQs are going down.  You don’t have to be a victim.  If I didn’t have an argument, why did you call me?  Are we just chit-chatting it up?  Would you like me to explain Hail Mary to you in Latin, Ave Maria, gratia plena, Dominus tecum?  Did you call me up for language lessons?  Are we talking about the Second Amendment?  If I don’t have an argument, then why are you wasting my and your time?

Caller Owen:  Why are you even on the radio?  Do you not want people to call in?

Mike:  Exactly.  Ask some of the e-mailers I have: Why am I on the radio?  That’s a great question, a good question.  I don’t know, Owen.  Apparently I’m grasping at straws.  I don’t have an answer to that.  But I’m going to meditate on it.  I just want to be very clear about what just transpired here, ladies and gentlemen.  And that is we just discovered there are no taboos, number one.  There is no such thing as immodesty.  One of our daughters — I have two of them, and many of you do as well — cavorting about and being photographed totally naked with but a lei over their décolletage, we shall say, as I shall describe it, there’s nothing immodest about that.  So immodesty then does not exist.