Brothers David and Jason are just TOO Christian

Mandeville, LA – Exclusive Transcript – “Now there are groups out there that are dedicated to monitoring who it is that’s being hired in any position of public station whatever.  They’re doing background checks on those individuals and then will produce reports and begin the extortion.  Just look for this to escalate, by the way.  In this instance here, we found out these guys showed up at an abortion clinic and tried to talk some woman out of murdering her baby.  Oh, no, not that!  We can’t have that on Home & Garden Television.”  Check out today’s transcript for the rest…

The concept: After a decade of flipping houses for profit, the Benham guys would now help families buy the home they thought they could never afford — a small-scale, personal “Extreme Makeover: Home Edition.”

In each episode, the brothers would find a fixer-upper and “transform it into their forever home — with a healthy dose of sibling rivalry between the brothers along the way,” said HGTV in the April announcement.

But on Wednesday (May 7), quietly, in a tweet, HGTV said the show will not be happening: “HGTV has decided not to move forward with the Benham Brothers’ series.”

“If our faith costs us a television show,” the brothers said in a statement on Thursday, “then so be it.” [Mike: If there were only so many that were so eager to accept this mild dose of martyrdom, we would not be in the pickle that we are in today.]

According to Towleroad.com, that HGTV was alerted to a Tuesday story by RightWingWatch.org, which looked into the background of the Benham brothers and found them to be “anti-gay, anti-Choice extremists.”

Mike:  Ladies and gentlemen, what’s happening here?  We have groups that are 501(c)(3) that are parasites.  They are suckling off the tax code.  Their existence is made possible by the fact that people can shower or lavish money onto these organizations for causes of their own, and can deduct what it is that they showered on the 501(c)(3) and not claim it as taxable income.  Why do you think the 501(c)(3) groups that were singled out by Lois Lerner were trying to get the designation?  It’s because this is the way you attract funding.  You appeal to those that have a butt ton of extra cash laying around that they’re going to pay taxes on, and instead of paying the taxes, if you have a favorite cause out there and you want to promote it and you were going to promote it anyway, why not get the tax deduction for it?  Again, the tax code is sinister.  The tax code provides this specifically so that those that do not seek profit, which should be the field of study for the clergy and theological organizations, but those that — they seek funding.  They do produce things, if you want to call it that, but they don’t seek profits.  Isn’t that a great scam?  Then how do you judge your success?  How much money people throw at you, how many lives can you ruin in the endeavor?  Many 501(c)(3) groups would measure their success that way.

Now there are groups out there that are dedicated to monitoring who it is that’s being hired in any position of public station whatever.  They’re doing background checks on those individuals and then will produce reports and begin the extortion.  Just look for this to escalate, by the way.  In this instance here, we found out these guys showed up at an abortion clinic and tried to talk some woman out of murdering her baby.  Oh, no, not that!  We can’t have that on Home & Garden Television.  Our viewers will bolt.  Will they, really?  Wow.

According to Towleroad.com, that HGTV was alerted to a Tuesday story by RightWingWatch.org, which looked into the background of the Benham brothers and found them to be “anti-gay, anti-Choice extremists.” [Mike: What makes you an extremist? How do you apply that label? Do you apply that equally? Are there pro-gay and pro-choice extremists? I’m just asking here.] A social media campaign quickly took flight to pressure HGTV to cancel the show.

Mike:  Again, ladies and gentlemen, let’s just review.  If you have pro-family, anti-same-sex marriage views, if you have pro-family, anti-choice views and you hold them because of your Christian faith, your options for employment for public stations in life, namely media, are becoming smaller — the funnel is closing in, ladies and gentlemen — smaller and smaller and smaller.  What are they trying to do here?  They are basically trying to force people to deny their faith so they can make a living.  That’s what’s going on here.  Tell me, does that sound like that’s just the work of the “left,” or is 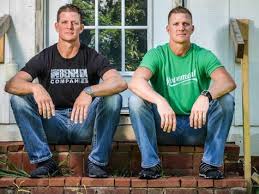 the work of the “left inspired by Him?”  I’m going for choice B.  He’s being very successful at this.

As I was talking about that, I was just watching the Clinton News Network again, with the sound off.  They’re showing the Benham brothers.  Then the next frame they show is Donald Sterling.  Then the next frame they show is Brendan Eich.  By the bye, Eric, did you hear the — I guess he called into a talk show in Los Angeles.  Did you hear Sterling’s interview where he was telling this guy: Look, you don’t know what you’re talking about, buddy.  I went to a high school in east L.A.  I ran for class president and I won and 75 percent of that school was black and Hispanic.  How could I be a lifelong racist if that were true?  Did you hear the interview?

Eric:  Bits and pieces of it, just the sound bites the news wanted to choose, which was mostly: I’m not a racist.  It wasn’t anything where they get into depth and actually help him explain his position a little bit more.

Mike:  Why would they do that?

Mike:  Why on earth would they do that?  Back to the Benham brothers.  Here’s what they did wrong, if you’re curious.  Let’s find out.

David Benham protested outside of the Democratic National Convention in Charlotte in 2012, which he told conservative radio host Janet Mefferd was needed to stop “homosexuality and its agenda that is attacking the nation,” reports the organization. There is also video on YouTube of David protesting outside of an abortion clinic in 2013.

What’s going to happen here, ladies and gentlemen, is that the people that are conspiring and perpetrating these things are going to find out in a very short amount of time — I think, anyway, they’re going to find out — that those that they are aggravating, those that they are persecuting, and the decrepit and depraved things that they do accept over the things that they will not accept — as in this case somebody protesting at an abortion clinic to stop the killing of a soon-to-be-born American child.  Even better than that, a soon-to-be-born prospective viewer for HGTV.  They’re going to find out that their ploy is going to backfire on them.  I like to call this boomerang smack.  You’re going to throw this boomerang out there.  You don’t think it’s a boomerang; you think it’s a dart. [mocking] “Got you, Christian boy.  Haha!  You’re not going to work on this network, pal.  Those Jesus-centered views, get out of here.”  People of faith, and maybe some that even aren’t of faith, and see what is going on here and see the hypocrisy and then are regaled by the filth and vulgarity that is served up by these same media companies are just going to start turning it off.  You know what, folks?  Just turn it off.  You don’t need it.  Turn it off.