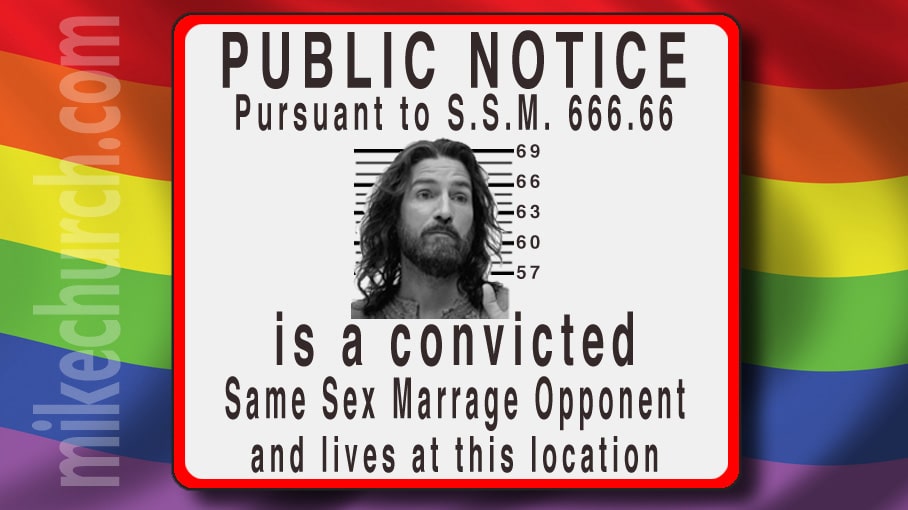 Mandeville, LA – Exclusive Transcript – “Did you ever speak out against homosexual marriage?” — “Yes, I did.” — “Go have your mug shot taken.  People need to be warned from people like you.  Bigots like you need to be ostracized in our community.”  Where once for thousands of years people obeyed and heeded the word of God, the tradition of marriage as set forth by the Catholic Church and its antecedents, we now find that we have a brand-new spate of martyrs.  We’re creating new martyrs, and we’re creating them in defiance of what He told his people to do.”  Check out today’s transcript for the rest…

(NOTE: Masha Gessen audio is below)

Mike:  I want to throw something else into the mix.   I told you earlier how I deleted the Firefox browser because it’s made by Mozilla.  Mozilla and I are finished.  Firefox browsers have been deleted from five computers here at Studio D this morning.  Why?  Because these clowns have sacrificed on the altar of same-sex marriage McCarthyism the CEO Brendan Eich.  What was Mr. Eich’s offense?  Well, he dared to take some of his own money, on his own free time, and donate it to people that were supporting California’s Proposition 8.  What was Proposition 8?  Proposition 8 was California’s attempt to define marriage as between one man and one woman.

Please support this site and Mike’s efforts to tell American History correctly and in an entertaining manner. Without YOUR purchases in the Founders Tradin’ Post of great features like “Times That try Men’s Souls” we cannot keep supplying all the great content and audio/movie production you have come to expect. You can also become a Founding Brother or Founding Father member of this site and REALLY help our efforts, click for details

Of course, there were loud cheers out there among the SSM (same-sex marriage) community.  Not everyone is cheering this.  This is just the beginning of a new wave of rainbow flag political correctness.  As a caller joked earlier, when Mr. Eich, if he changes his resident now from fear that he’s going to be hounded by homosexual bullies, is he now going to have to go to the sheriff’s department?  Are we going to pass laws in every state so that we can out these people that are LGBT marriage offenders?  [mocking] “Did you ever speak out against homosexual marriage?” — “Yes, I did.” — “Go have your mug shot taken.  People need to be warned from people like you.  Bigots like you need to be ostracized in our community.”  Where once for thousands of years people obeyed and heeded the word of God, the tradition of marriage as set forth by the Catholic Church and its antecedents, we now find that we have a brand-new spate of martyrs.  We’re creating new martyrs, and we’re creating them in defiance of what He told his people to do.

There should be some grave concerns about that, but there aren’t because it’s a new fashionable thing, don’t you know?  It’s new and fashionable, you see, to be on the side of redefining marriage.  [mocking] “I was part of the revolution.”  Oh, congratulations.  History is really going to love you.  This is why I play you that clip from Masha Gessen, who admits what it is that these people and these radicals are really after, which is the extermination of marriage and substituting it for whatever they wish to substitute it with at any given point in time.  As she says in the clip: Why should a child be limited to having just one or two parents?  Why can’t they have five?  Why can’t my brother father my child?  Folks, where are the people that would just say: I have no desire to find out who it is that is homosexual and hound them to the ends of the earth and to make their lives a holy living hell.  I am perfectly content to let it be.  I have no desire, no intent to do that whatsoever.  But now that you’re forcing it upon me, and now people that are in precarious positions like broadcasters or anyone that has any tangential relationship to the public, where does this end?

There’s another question here: How did these people find out that Eich had given the thousands of dollars to Prop 8 proponents?  I suppose that this might have been public record to keep track of political donations, but I don’t know that.  I don’t know how it was discovered.  I don’t know if he admitted it.  He hasn’t said and I haven’t seen.  I don’t want to start any rumors.  What if someone in the government, what if someone at the IRS or someone in the California Department of Revenue leaked the info out?  You people that say there’s no danger in the NSA knowing everything that you do, if it is discovered that someone in government was the culprit here in alerting someone that was not in government that Brendan Eich had donated to anti-same-sex marriage causes, and then had seeded that information to same-sex marriage proponents, there is a major problem here.  That is a huge breach.  Like I said, I don’t know that that happened.  I want to be clear.  Right now I’m just theorizing about it.  These are dark times.

I want you to consider one more thing in this.  I’m going to read you one more story.  Here’s the headline: “World Vision board member resigns over gay uproar.”

A World Vision board member has resigned in protest after the Christian aid group quickly reversed its decision to hire employees in same-sex marriages.

Mike:  I emphasize, Christian aid group.  If you’re at a Christian aid group, what is your purpose?  It would seem to me that you would be missionaries.  As being a missionary, you would be shipped off to strange places across the planet and you would deliver food and medical services, maybe construction services or whatever is needed, to those that either can’t afford them, don’t have them, or don’t have the skills to have or afford them.  That’s what a missionary would do.  That’s how you would deliver aid to the world’s less fortunate.  What difference does it make, or what difference should it make, of someone’s marital status?  Let’s listen to the rest of the story:

Jacquelline Fuller, director of corporate giving for Google Inc., said in an email Wednesday to The Associated Press that she remains a “huge fan” of the group’s work on behalf of the poor, but she resigned Friday “as I disagreed with the decision to exclude gay employees who marry.”

“Did you ever speak out against homosexual marriage?” — “Yes, I did.” — “Go have your mug shot taken.  People need to be warned from people like you.  Bigots like you need to be ostracized in our community.”  Where once for thousands of years people obeyed and heeded the word of God, the tradition of marriage as set forth by the Catholic Church and its antecedents, we now find that we have a brand-new spate of martyrs.  We’re creating new martyrs, and we’re creating them in defiance of what He told his people to do.

Mike:  I’m going to go out on a limb here and I’m going to take World Vision at its word that it’s a Christian-based charity.  When our Lord and Savior Jesus Christ walked this earth and gave sermons and instructed the apostles, the disciples, and those that gathered to hear him speak and to watch him heal and perform miracles, when he gave instructions — of course, those that had come before him, other prophets, had also, directed by his Father, we were told to do certain things.  Among those were to feed the hungry, clothe the naked, and care for the sick.  These are commandments.  These are acts of Christian chivalry or charity.  Use whatever term you like.  They’re well documented.  There’s no argument about them.  Let’s set that out as point number one.

So we have in the one instance an imperative command to do something, feed, clothe, care for, and on the other instance nothing.  If anything, there’s an admonishment against it.  These people that work inside what’s called a Christian charity choose Stan and Steve over the commandment handed from God himself?  I’m sorry, folks, but I just can’t reconcile that in my brain.  That doesn’t sound like a Christian charity to me.  It sounds like you have a bunch of worldly people that are defying the word of God and inserting their own prerogative.  Why?  Because it’s fashionable and it’s politically correct.  Besides, it’s the nice thing to do these days, Mike.

What are the faithful, that catechumens, to do?  Are we to do what is nice, or are we to do what we have been commanded to do and has been handed down for over 2,000 years now?  Why can’t we just agree that there’s not going to be any acknowledgement in the church that Stan and Steve are going to be wed.  It’s not going to happen.  That’s the end of it.  If you can get the State, by legislative act, to recognize that union, okay.  We live in democracies.  There’s really not much we can do about that.  But we don’t have to condone it and we don’t have to do it inside the confines of the church.  Why can’t there just be a truce and agreement here?  I am not going to go after or persecute you.  You don’t come after and persecute me.  Besides the fact, we’re talking about expressions of religious freedom here.  Folks, there’s not going to be a truce.  These radicals are not going to raise a white handkerchief, because right now they have a misguided public slowly acquiescing to their side.