Mandeville, LA – Exclusive Transcript – I haven’t done anything wrong, but I’m not going to tell you about what I didn’t do wrong.  There’s something just a little bit disingenuous about that statement, just a wee bit.  I haven’t done anything wrong, but I refuse to tell you about the things I didn’t do wrong.  She then proceeded to get up and leave.  Check out today’s transcript for the rest…

Mike:  Lois Lerner, one of the IRS officials that was supposed to testify in front of Congress yesterday — AG, were you able to find audio of her waltzing in there and basically saying: Hi, my name is Lois Lerner [laughing]. I plead the Fifth Amendment.  I’m gonna go home now.  See you guys later.  Have a nice hearing!

Mike:  Am I being callous in that description or is that a pretty nice summary?  If you shrink it down, that’s pretty much what happened.  Reporters were chasing her down the hall and shouting questions at her, but she was having none of it.  The other gentleman decided to stay.  Shulman decided he would go ahead and answer questions for six hours, although he didn’t really answer any questions.  Here is the audio of the IRS chief.  Remember, there’s nothing to see here, citizen, move along.  Citizen, obey your federal overlord and move along!  Here’s the audio of Ms. Lerner pleading the Fifth.

Lois Lerner: Members of this committee have accused me of providing false information when I responded to questions about the IRS’ processing of applications for tax exemption. I have not done anything wrong. I have not broken any laws. I have not violated any IRS rules or regulations. And I have not provided false information to this or any other congressional committee. While I would very much like to answer the committee’s questions today, I’ve been advised by my counsel to assert my constitutional right not to testify or answer questions related to the subject matter of this hearing. After very careful consideration, I’ve decided to follow my counsel’s advice and not testify or answer any of the questions today. Because I’m asserting my right not to testify, I know that some people will assume that I’ve done something wrong. I have not. One of the basic functions of the Fifth Amendment is to protect innocent individuals, and that is the protection I’m invoking today.

Mike:  Where’s that coming from?  Hey, hey, Bee Gees, get out of here!  I haven’t done anything wrong, but I’m not going to tell you about what I didn’t do wrong.  There’s something just a little bit disingenuous about that statement, just a wee bit.  I haven’t done anything wrong, but I refuse to tell you about the things I didn’t do wrong.  She then proceeded to get up and leave.  I’m reading Dana Milbank today.  Here’s Milbank’s recounting of this.  Bear in mind that Dana Milbank is a lefty.  I think he’s one of the better lefties that writes at The Washington Post, but he is a lefty.  He’s describing Ms. Lerner’s testimony as you just heard it.

Lois Lerner, who runs the IRS office that targeted tea party and similar conservative groups for extra scrutiny, took the Fifth when she appeared Wednesday before the House Oversight and Government Reform Committee. Douglas Shulman, who was running the IRS when the abuses occurred, would have been wise to do the same.

Lerner asserted her innocence and then fled, chased down a hallway by camera crews and escorted by a police officer who shouted “Get back!” at the pursuing mob; [Mike: I wonder if he shouted it musically. (singing) Get back, get back, get back to where you once belonged.] it was all over in a few minutes. But Shulman stayed at the witness table for six hours, insisting the entire time that he had done everything right, that he wasn’t responsible for what went wrong and that it wasn’t that big a deal anyway.

“I don’t take personal responsibility for there being a list with criteria put on it,” he testified.

“I did not hands-on decide the training of 90,000 people,” he told the lawmakers.

Mike:  Andrew, one of the really salient points that Brion McClanahan made yesterday when he was on talking about he and my new book Is Davis A Traitor? was that when the patriots of 1776, when they leveled their charges against King George III, George pretty much said the same thing.  It’s almost like the scene from The Big Lebowski where Jeff Bridges is in David Huddleston’s (who plays the Big Lebowski) office and Huddleston screams at him, “Did I personally micturate on your rug?”  Bridges says, “No, man.  Woo peed on my rug.”  “All right, sir.  So every time a rug is micturated upon in this fair city, I have to compensate?”  It’s guilt by association, in other words.

McClanahan’s point was that when Jefferson was making his charges against the king, and when the patriots of ’76, the 56 men that signed the Declaration of Independence signed their lives, fortunes, and sacred honor to that document, they didn’t care that George had said: I didn’t personally come over there, man, and quarter troops in your houses.  I didn’t personally go over there and tell Dunmore to dissolve the House of Burgesses assembly.  I didn’t personally sign off or pass the Stamp Act or the sugar tax.  I didn’t do any of those things personally.  In the famous Trumanian sense, or in famous Trumanian parlance, the buck stops here.  The colonists and patriots of ’76 said they didn’t care.  It was done under your administration.  It doesn’t matter whether or not you personally did it.  You were in charge of the whole shebang.

Just like a very famous testimony, or it will be famous now, occurred two days ago in the United States Senate.  Tim Cook, who is the CEO of Apple Computers, was keelhauled in front of the Senate and excoriated for not forking over enough of Apple’s dough, and for shielding some of their income in Ireland and what have you.  If Cook had been in there, and if Cook had been testifying about how Apple, whose stock had run up over $600 a year or two ago, that Apple had enticed all these investors and people had invested billions of dollars, then if Apple had not delivered on the goods and he was called in to testify about what had happened to all these people’s investments, no one on that committee would care who did what under Cook.  Cook would have been responsible for it, just like Cook was being yelled at by John McCain because of the sheltering of income.  Cook stood up there and took the withering heat and made his case that Apple hadn’t done anything wrong, and that Apple is the biggest corporate taxpayer that the United States has, and he went on about his business.

Mike Church Show Transcript: Patrick Henry Would Abolish The IRS, So Why Don’t We?

The point is that the guy in charge had to claim responsibility for this and he did.  This is not what is happening with this IRS scandal.  Apparently — and this makes total sense if you’ve ever dealt with the IRS — nobody is in charge of the IRS.  If I were a space alien or an extraterrestrial and I had just parachuted in here from some faraway planet and didn’t know any better and I witnessed this hearing and I could speak English, I would have to say I could not ascertain who in the wide, wide world of sports was running this entity called the Internal Revenue Service. 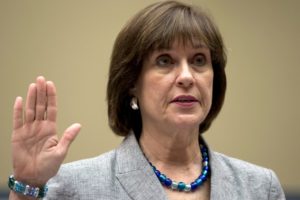