EDITOR’S NOTE: This article and audio feature were originally published on  Sep 27, 2012

Mandeville, LA – On the 45th Anniversary of the passage of the Declaration of Independence, Secretary of State, John Quincy Adams, delivered the following remarks to the members of the 22nd Congress in attendance. The reader wil N.B. that Adams acknowledges the Declaration of Independence while restating that it was American Custom to “(sic)…respected the independence of other nations while asserting and maintaining her own.” There is no trace of any of the arrogant, baseless and loud pronunciations of today’s “conservatives” of American superiority or as a “shaper of events” even. You will also N.B. Adams’ famous “in search of monsters to destroy” pronouncement.

To listen to the COMPLEAT audio version of this Project ’76 Webisode, sign in with your Founders Pass, if you’re not a Founders Pass member, sign up now! To download this feature for .99¢ click here

04-07-1821, Washington, D.C. – AND NOW, FRIENDS AND COUNTRYMEN, if the wise and learned philosophers of the elder world, the first observers of [m]utation and aberration, the discoverers of maddening ether and invisible planets, the inventors of Congreve rockets and Shrapnel shells, should find their hearts disposed to enquire what has America done for the benefit of mankind?

Let our answer be this: America, with the same voice which spoke herself into existence as a nation, proclaimed to mankind the inextinguishable rights of human nature, and the only lawful foundations of government. America, in the assembly of nations, since her admission among them, has invariably, though often fruitlessly, held forth to them the hand of honest friendship, of equal freedom, of generous reciprocity.

She has uniformly spoken among them, though often to heedless and often to disdainful ears, the language of equal liberty, of equal justice, and of equal rights.

She has, in the lapse of nearly half a century, without a single exception, respected the independence of other nations while asserting and maintaining her own.

She has abstained from interference in the concerns of others, even when conflict has been for principles to which she clings, as to the last vital drop that visits the heart.

She has seen that probably for centuries to come, all the contests of that Aceldama the European world, will be contests of inveterate power, and emerging right.

Wherever the standard of freedom and Independence has been or shall be unfurled, there will her heart, her benedictions and her prayers be.

But she goes not abroad, in search of monsters to destroy.

She is the well-wisher to the freedom and independence of all.

She is the champion and vindicator only of her own.

She will commend the general cause by the countenance of her voice, and the benignant sympathy of her example.

She well knows that by once enlisting under other banners than her own, were they even the banners of foreign independence, she would involve herself beyond the power of extrication, in all the wars of interest and intrigue, of individual avarice, envy, and ambition, which assume the colors and usurp the standard of freedom.

The fundamental maxims of her policy would insensibly change from liberty to force….

She might become the dictatress of the world. She would be no longer the ruler of her own spirit….

[America’s] glory is not dominion, but liberty. Her march is the march of the mind. She has a spear and a shield: but the motto upon her shield is, Freedom, Independence, Peace. This has been her Declaration: this has been, as far as her necessary intercourse with the rest of mankind would permit, her practice. 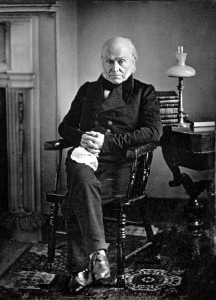 Beautiful sentiment..but..what do you do while in practice of these ideals the forces of “evil” for lack of a better word bring their strife to our front door?

You must first realize that the reason “evil” shows up at your door is because this government, since long ago, has been provoking and using force in other nations that create hatred towards us. Once that understanding has been established, the solution is to follow the advice of the founders; Remain a friend to other nations, encourage and cheer on their advances in freedom and liberty. However, never become militarily or monetarily involved in their transformation. Good or bad. Interference, involvement and meddling in foreign affairs will always create resentment, from either one side or the other.

Cliff, that is precisely what JQA says in his speech. Fitting, isn’t it, that he delivered it on the 45th anniversary of Our Declaration!?

What does the phrase “…our front door…” mean, or imply? Does it mean we’re being attacked physically? Then we should immediately defend ourselves, with force if necessary. Of course.

If there are no signs of imminent invasion, then our Army should stand down. Sending a “symbolic” small number of troops to countries that “threaten”us ” are usually precursors to sending more troops until a military standoff arises.

And we’re off, perhaps, to another war.

I forgot – “at our front door” is rhetorical jingoism.