Mandeville, LA – Exclusive Transcript – “Tell us about Professor Jonathan Turley of George Washington Law School in Mordor on the Potomac River, who is agitating against the president, even though he has been strongly encouraged that he should not.”  Check out today’s transcript for the rest….

Mike:  Tell us about Professor Jonathan Turley of George Washington Law School in Mordor on the Potomac River, who is agitating against the president, even though he has been strongly encouraged that he should not.

Kevin Gutzman:  Well, he’s encouraged by career incentives not to make any criticism.  I don’t know that anybody has personally told him that he’s behaving imprudently.  Jonathan Turley is someone who may have come to the attention of listeners in his old capacity as regular legal and political commentator on the old Keith Olbermann show Countdown.  Turley is well known for being willing to follow his constitutional reasoning to whatever outcomes it leads him to.  He is politically liberal and somebody who previously has said he sympathizes with the policy goals of the Obama administration in general.

But he’s also somebody who has, to a growing degree over recent months, gone into public fora such as television appearances, testimony before various congressional committees and so on and lamented what he sees as the apocalyptic constitutional consequences of President Obama’s current behavior.

Of course, one might expect, and one would not be disappointed, that he would list things like making recess appointments when the Senate wasn’t in recess, or announcing that the PPACA was going to be read as including different implementation dates than it actually does include, and so on.  What Turley has repeatedly said is: Look, we have a legislative branch whose task is to legislate.  We have an executive branch whose task is to execute.  When the president undertakes to announce that he is going just to change statutes because he considers it convenient, then this is a serious, grave threat to our entire constitutional system.

Of course, you and I and Tom Woods and others have been saying this for years.  Here we have Turley, who’s got the liberal bona fides saying the same thing.  The point in a NomocracyInPolitics.com piece is that this is a good public service because Turley can expect that it will not redound to his career benefit.  One does not advance up the academic hierarchy in legal academia by gainsaying the Democrat Party.  Turley must know that.  Listeners may not be familiar with the fact that legal academia really is a hierarchy.  It’s not like the rest of academia.  It’s very common for people in legal academia to move up the ladder of schools from one to the next, they hope on their way to Yale eventually, because Yale is the most famous, highest-paying, most prestigious, most rigorously-policed in terms of admissions to law school in the country.  Turley has played the game of moving up this ladder.

I would think it’s likely that this kind of criticism of Obama, and in some cases appearing opposite prominent 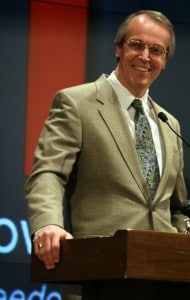 Democrats who were saying the opposite of what he was saying about this phenomenon, he must know that this is not likely redound to his career benefit, but here he is doing it anyway.  Why is he doing it anyway?  Well, because apparently he actually thinks that having a constitution matters.  There’s a rare enough idea among prominent legal academics.  Professor Turley has apparently come to the conclusion that yes, someday there will be a president other than Obama.  Besides that, there will be even other Democratic presidents.  We don’t want to have a system in which the president is not only responsible for implementing the law but he essentially can remake it.

Professor Turley did applaud the Supreme Court’s unanimous decision saying that no, President Obama did not have the right to make recess appointments when the Senate was not in recess.  One might have thought that was a foregone conclusion unless one had been following the Supreme Court in the last 50 years.  Especially this current situation with Obamacare, there’s just a rolling revision of the law by the president.  Whenever his deadline comes up, he kind of seems to go talk to his political advisors and ask: Is it convenient for our party if we implement this part of it now.  No, it isn’t, but if we did next February, that would work.  Then he announces: This is being implemented in February.  Turley says this is completely contrary to what he calls — of course, he’s not the first one to call it this — the Madisonian system.  Good for Professor Turley.  That’s my message.  Good for him.

Mike:  It has the novel distinction, Turley’s criticism, of coming from someone that probably agrees with Obama in substance.

Gutzman:  Right, that’s what he said.

Mike:  But he’s trying to make the point: Look, even if I agree with you in substance, you’ve still got to go through the right practice.  Procedure matters.  When you don’t have procedure, you don’t need a written constitution.  You don’t need any sort of written structure at all.  You have ad hoc or fiat government, at will.  You just make it up as you go along.  I don’t think I like that, but I do like this, so let’s do that one.

Gutzman:  That’s exactly right.  Of course, what this amounts to is more of the ongoing subordination of Congress to the executive in the various areas we’ve been talking about just now.  Of course, you and I in the past have discussed ways in which the Supreme Court has gotten into the act of grabbing power from Congress,

too.  Of course, the three federal branches are all in the business of grabbing power from the state governments where most of it is supposed to reside.

Turley does sound like someone who is fully cognizant of the, as he says, the Madisonian system, and thinks it’s worth retaining.  That is he thinks it’s perhaps a good idea to have, oh I don’t know, an elected legislative branch to legislate instead of just electing a king to do that.