Mandeville, LA – Exclusive Transcript – When James Madison was writing Federalist Paper No. 62, I think, something like that, when he was writing that particular Federalist Paper and he was pining away from a check on the excesses of the state legislatures — he wanted a veto on the acts of the states — the reason he gave was that you had to have some kind of a board of revision that could look at laws that were injurious to liberty and could repeal them.  If law became too complex and if there were too many laws that were passed, then nobody could possibly obey them because they could not possibly know what they all are.  Check out today’s transcript for the rest…

Mike:  Chuck in Mississippi, you’re next on The Mike Church Show, the Sirius XM Patriot Channel.  How you doing?

Caller Chuck:  Hey, I’m doing pretty good.  It’s actually Missouri, small detail.  At some point I learned a phrase: It’s the 100 percent solution for the 1 percent problem.  You’ve got one bad guy, one dirt bag, one person not paying attention.  Instead of taking him out and straightening him out, you make a rule for the entire 100.  That’s how we govern.  By and by, things like healthcare suffer that all day long.  There’s such a web of hoops for us to jump through like you’re talking about the background checks.  It annoys the rest of us and it doesn’t solve the problem.  It sure makes the rest of life so ridiculously entangled that you can hardly function.

Mike:  It makes the sheeple bow before their federal overlords and do what they’re ordered to do like good little sheeple, and obey all the laws that are written for them because that’s what we do.  We’re good citizens, aren’t we?

Caller Chuck:  Another side effect is that it causes corruption.  I’m a physician.  I have to break laws to get my job done.  I break a whole bunch of laws and don’t even know it.  I’m a serial criminal but it causes us to break laws.  They’re stupid laws, but, again, that just erodes the integrity of the culture.

Mike:  When James Madison was writing Federalist Paper No. 62, I think, something like that, when he was writing that particular Federalist Paper and he was pining away from a check on the excesses of the state legislatures — he wanted a veto on the acts of the states — the reason he gave was that you had to have some kind of a board of revision that could look at laws that were injurious to liberty and could repeal them.  If law became too complex and if there were too many laws that were passed, then nobody could possibly obey them because they could not possibly know what they all are.  What you’re talking about here is you being a serial lawbreaker.  I imagine most of us are serial lawbreakers.  As a matter of fact, I am breaking a law right now because I am enjoying one of my very own El Rey Dude Corona cigars in a place of business in the township of Mandeville, Louisiana, and the township has banned smoking in all indoor businesses.

Caller Chuck:  The federales are on their way.

Mike:  They offered a few exceptions.  The exceptions were, I believe, places that had already been in business for x-amount of years and where smoking was already prohibited, which I would not be covered under.  A federale wouldn’t come to enforce that.  We’d have a local yokel cop show up at the door.  [mocking] “The neighbors are complaining of cigar smoke.  What are you doing in there?” — “Enjoying a cigar.” — “You have the right to remain silent, sir.  Get up against the wall.  What other laws of ours are you breaking in here?”  The law has become so voluminous that it is impossible for it to understand, therefore it cannot possibly have the salutary effect that those that pass the laws dream they’re having on the citizenry.

Russell Kirk wrote a great book — the great conservative thinker, father of the modern conservative movement — I think one of his finest works called The Roots of American Order.  In that book, Kirk jumped off the decepticon plantation and would have remained permanently off of it — of course, it didn’t really exist as it does today in that time.  In that book, Kirk went all the way back to Hellenic times, all the way back to Athens.  He traced back: Where does order come from?  How do you get order?  The TV show was called Law and?

Mike:  Where does the order part of law and order come from?  The first chapter of the book is Kirk explaining that people accept the term “law and order.”  Hell, people star in television shows, as I just pointed out, called Law and Order.  Those are two separate and distinct words.  They obviously have different meanings.  Otherwise you would have a TV show called Law and Law or Law and Legality or something redundant like that.  What’s the order part, Chuck?

Mike:  The order part comes from — no, not autonomously.  You are humbled in the presence of God.  You know that there is a higher order — the lawmaker cannot always be watching you; He can and is.  This was part of accepted dogma for millennia, that there was some form of a He.  In our world, in Western civilization, that was He, God the Father, the Almighty.  He was always watching so you don’t contravene his laws.  If you do, if you don’t ask for forgiveness, you’re going to pay for them in the afterlife.  This is where the order part of law and order comes from.

Caller Chuck:  That’s right, and Lord forgive my arrogance there for forgetting.

Mike:  You may be obeying the order part.  Part of the order part is you may be doing some of the things that you’re doing, you serial lawbreaker you, to save or to aid and comfort the human condition in your work as a physician.  Are we to hold you accountable for this and say: We’ve got to stop that guy from saving lives?  We’ve got to stop him from making other people comfortable.  Law and order, remember that, and Kirk’s book is called Roots of American Order.  I think it’s in the library at MikeChurch.com.  If not, we’ll add it today. 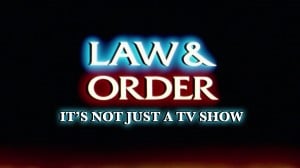