Mandeville, LA – Exclusive Transcript – Whose idea basically was Obamacare?  The Heritage Foundation, it’s their idea.  This is the conservative response to Hillary’s 1993 effort in Hillarycare.  How many of you are old enough to remember Hillarycare?  If you are old enough to remember Hillarycare, then you will remember that what was proposed was a centralized — it was nowhere near as complex as Obamacare ultimately became — version of a European-style government-run health system.  Check out today’s transcript for the rest…

Here is the link to the Daniel McCarthy article at The Imaginative Conservative that Mike is referencing.

Mike:  Can you imagine a scenario under which President Barack Hussein Obama is one of if not the most conservative guy in the room and he’s gathered with a bunch of Republicans?  Can you imagine that?

AG:  I’m waiting to hear how he justifies or somehow relates the idea of Obamacare being conservative.

Mike:  I’ll tell you how.  Whose idea basically was Obamacare?  The Heritage Foundation, it’s their idea.  This is the conservative response to Hillary’s 1993 effort in Hillarycare.  How many of you are old enough to remember Hillarycare?  If you are old enough to remember Hillarycare, then you will remember that what was proposed was a centralized — it was nowhere near as complex as Obamacare ultimately became — version of a European-style government-run health system.  Hillary didn’t make any bones about it.  She had this secret commission that met. This is probably when someone other than me should have raised their hand and said: Exactly where do you guys find the authority, where does one divine the authority and legitimacy that the FLOTUS has been accorded?  There were people saying this, but they weren’t really stating the titles of nobility clause in the Constitution.  They were instead just complaining that it was just the president’s wife and it was evil arch leftist Hillary Clinton that was running it.

In the first two years of the Clinton administration, the Democratic Congress passed an assault-weapons ban, a tax hike, and a bill criminalizing anti-abortion protesters (the Freedom of Access to Clinic Entrances, or FACE, Act). Clinton tried unsuccessfully to abolish the ban on homosexuals serving in the military—a rather shocking idea in 1993—while his wife championed a healthcare overhaul much more progressive than Obamacare. Today Bill Clinton is remembered as a welfare-reforming moderate, but when he had the chance he pushed the liberal agenda as far as it would go—and farther.

That doesn’t make him a philosophical conservative, of course. But Obama does exhibit a great deal more “stand-pattism” than ideological fervor. Progressivism itself is far from revolutionary in 2013: Obama came around to supporting gay marriage only at a time when 51 percent of Republicans under 30 do so, too.

Mike:  You will remember that President Obama refused to jump on the “I am for gay marriage” bus until Joey Biden outed him, was that in May, last year on Meet the Press.

AG:  Yeah, a couple months before the convention.

Mike:  It was Joey Biden that actually instigated this.  It wasn’t President Obama.  He kept saying no.  Imagine this, Barack Obama headline keynote speaker at CPAC 2017.  That’s about where it’s going.

That issue—which radicals have never found very radical at all—has been debated now for two decades. And that’s still, as far as older folks on the right are concerned, the cutting edge of leftist innovation.

No left-wing economic theory is challenging neoliberalism. Obama’s program is Keynesian—[Mike: If you’re with me on today’s Latin phrase, i.e. is Latin for id est, which is “that is.”] i.e., it draws on ideas that were fresh 80 years ago—and its Keynesianism is tepid in the eyes of figures like Paul Krugman, who themselves are hardly Bolsheviks. There are plenty of bad ideas on the left, but they’re all old ideas.

On the other hand, the past decade has seen exciting new bad ideas arise on the right, beginning with that of fomenting revolution throughout the Middle East. We already have an excessively financialized economy, but while the left has played a considerable role in bringing that about, the notion that there’s nothing dangerous about concentrating wealth in very few hands—or that American workers should have to compete for wages on a leveled playing field with billions of people in the developing world—is characteristic of the right’s economic philosophy. If you had to say whether America was in greater danger of tilting toward communism or plutocracy, could you honestly answer “communism”?

Mike:  What McCarthy is saying is that many of the horrifically bad ideas that we see today and that we are possessed of today are not leftist in origin.  They actually came from the decepticon right.  They’re still being promoted by decepticons today.

An overpriced, hyper-militarized foreign policy that fails to protect us from its own blowback; the immiseration of the American middle class; the structural weakness of the global financial system; the diminution of privacy…

Mike:  Who is it that’s waging the police state war?  Obama always gets the blame for it, but who is it that authored the Patriot Act?  Who is it that created the Department of Homeland Insecurity?  You know that group that’s stockpiling all those bullets that you Tea Partiers and conspiracy theorists are always sending me emails about?  That wasn’t Obama’s creation; that was George W. Bush’s creation.  The Tom Delay Congress created the DHS.  They’re also the geniuses who gave us the TSA.  I think McCarthy is onto something.  I’m not going to call Obama a conservative, certainly not, but the horrifically bad ideas and the big government, statist, police state ideas are coming from the Lindsey Grahams and John McCains of the world.

…amid the press of technological intrusions and mass taste; and the political/cultural fragmentation that deprives society as well as government of the capacity to act—all these things transcend the late 20th-century American understanding of the left-right spectrum. If your idea of conservatism is that it’s “anti-left,” you won’t be fighting the most important battles.

Mike:  I think that’s the takeaway.  If your idea that “I’m conservative,” how are you conservative?  I’m not Obama.  I’m against Obama.  Okay.  Thus we see now that there are sides emerging inside the Republican Party.  The schisms, the strains that are emerging are vastly different. 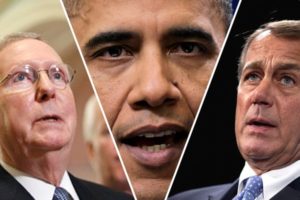