Mandeville, LA – Exclusive Transcript – Just when you thought it was safe to turn on conservative radio again or read conservative publications, here we find a plea on the pages of the Washington Times from the editorial board to incorporate the Third Amendment so that police in Nevada can be prevented from using a neighbor’s home to surveil another neighbor.  I am all for preventing the cop from breaking anybody’s door down and claim they’re on official police business and you have to surrender your house to them.  That’s the business of the State of Nevada.  Check out today’s transcript for the rest…

Mike:  The Second Amendment has now been incorporated.  It is now used as a club to bludgeon any state that dares to write its own gun laws.  The First Amendment has been incorporated.  You don’t have freedom of religion to pray in your own public ceremonies, which you should have unless your state prescribes it.  The Supreme Court has ruled that they get to make the laws for every soul living on the face of the planet including the 311 million that live here.  The Fourth and Fifth Amendments don’t even exist any longer, see the NSA and partially-warrantless surveillance.  All these amendments have already been incorporated.  The Sixth Amendment nobody really cares about.  The Seventh Amendment, meh.  Eighth Amendment, maybe a little bit.  So One, Two, Four, Five and Eight.

Now comes the Third Amendment.  Just when you thought it was safe to turn on conservative radio again or read conservative publications, here we find a plea on the pages of the Washington Times from the editorial board to incorporate the Third Amendment so that police in Nevada can be prevented from using a neighbor’s home to surveil another neighbor.  I am all for preventing the cop from breaking anybody’s door down and claim they’re on official police business and you have to surrender your house to them.  That’s the business of the State of Nevada.

Founders TV – Like It Or Not: The 16th and 17th Amendments Are Part of the Constitution

Two years ago, Christophe Worley, a police officer in Henderson, Nev., called on Anthony Mitchell to ask whether police could use the Mitchell home to keep watch on a neighbor. [Mike: This is a local police officer in a town in the State of Nevada, the sovereign country of Nevada. That’s how you should think of a state, as a sovereign country, just like France, just like Sweden, just like the Germans.] Mr. Mitchell declined. Soon he heard pounding on the front door. Henderson police officers arrived with orders from their superiors: “If Mitchell refused to answer the door, force entry would be made, and Mitchell would be arrested.” The door was battered down, and Mr. Mitchell was arrested at gunpoint for “obstructing an officer.” The frightened family dog was shot.

The Mitchell family sued, asking the U.S. District Court for Nevada to hold the cities of Henderson and North Las Vegas in violation of their constitutional rights when police seized their home and used it for a sting operation against a neighbor…

Mike:  The Mitchells sued using a federal court, which was mistake number one.  This is an issue that has nothing to do with the federal government or with a federal court.  This is an issue and an item for the legislature of the great State of Nevada, for the people and citizens of the great State of Nevada to work out and fix amongst themselves.  I don’t have a copy of the Nevada Constitution in front of me.  Perhaps a Nevadan is listening and can weigh in on this.  I’m fairly certain, like in most state constitutions, there is a prohibition against unwarranted searches and seizures and against occupation of homes.  This is an issue for Nevada to work out.  The federal constitution doesn’t have anything to say about this.  Were this door broken down in 1879, no one would have gone to a federal court because they would have laughed you out of there.  If the door would have been broken down the cops in 1910, 1915, all the way up until around 1927 — oh, but we must expand the powers of the federal judiciary, they say.  Let’s have a federal government.  It will be fun, they said.  Let’s have federal judges.  They’ll do right by us, they said.

Mike Church Show Transcript – Will Congress Raise The Debt Ceiling? Of Course They Will!

Now you have people believing and I guess it is now the new constitutional order that everything now runs through federal courts and through the federal government.  Every right on Earth is either shielded by, created by, or protected by a federal judiciary or the federal legislature.  There are no rights that are held near and dear locally.  There are no rights held near and dear in one state and denied in another.  No, we can’t have that.  We’re 311 million people. We’re 311 million Americans, bucko, under that same flag.  There is no individuality.  There is no sovereignty for any state when it comes to rights.  They are ubiquitous and they are not in question.  This is part of the problem here, folks.  No, this is the problem.  We want limited government, but not when it comes to breaking doors down.  We don’t want the federal judiciary to stay out of those affairs.  We want them to meddle in that affair, but not when it comes to my land or my water or my farm or my gun.  You can’t have it both ways, folks.

The Mitchell family sued, asking the U.S. District Court for Nevada to hold the cities of Henderson and North Las Vegas in violation . . .

Mike:  Again, they should have sued and asked the state and the state legislature to hold them in violation.  Of course, the legislature could then, if they don’t have an amendment safeguarding people in their persons and property and homes, they could pass one and tack it onto the Nevada Constitution.

The cops are not soldiers, to be sure, but this is the bullying by the state that the Founders intended to prevent with the Third Amendment. [Mike: They intended to prevent the federal government with the Third Amendment, Washington Times, not the State of Nevada.] Patrick Henry told the Virginia ratifying convention that the government’s power to install its forces in the people’s homes represents the power “to tyrannize, oppress and crush us.” In his 19th-century “Commentaries on the Constitution,” the legal scholar Joseph Story [Mike: That’s a stretch calling Story a legal scholar, more like a legal charlatan.] explained that the Third Amendment is about more than quartering federal troops. “A man’s house shall be his own castle,” he wrote, “privileged against all civil and military intrusion.”

Ilya Somin, professor of law at George Mason University, observes on an Internet blog that the Supreme Court has yet to rule on “incorporating” the Third Amendment [Mike: There’s that word “incorporating,” meaning you use it as a club to bludgeon state legislatures and the states, the people living in the states and their right to make their own laws at their own pleasure to serve their own safety and happiness.] applying it to the states as well as to the federal government, as it has done with the rest of the Bill of Rights. This case could give the courts a chance to remedy the oversight.

Mike:  Folks, I don’t believe I’m reading this.  The Washington Times is supposed to be the conservative alternative to the Washington Compost, right, Mr. Gruss?  Isn’t that the purpose of the Times, to take the opposite view of the Post most of the time?

AG:  That is the stereotype, yeah.

Mike:  Here you have a “conservative” newspaper arguing that we ought to just feed a little bit more of the Constitution through the old incorporating paper shredder because it’s expedient and it needs to be incorporated?  Ladies and gentlemen, when is this going to end?  If it’s not going to end, what in the world do we even have states for anymore?  What is the purpose?  I asked this question two weeks ago and no one gave me an answer.  I’m going to ask the damn question again.  What is the purpose of a state?  What does a state do other than collect taxes for the Feds and pretend as though they have some say-so over the affairs that happen inside their borders?  You’ve been decepticonned again.  Is anyone getting any of this today, anyone? 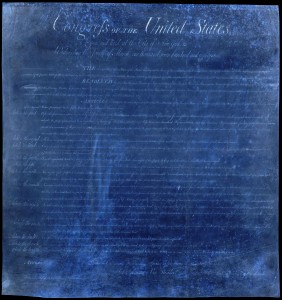