Mandeville, LA – Church Doctrine – Question: Have you told your children lately that “there’s no such thing as a free lunch?” Have you told them that “money don’t grow on trees?” Before answering those questions here are two more. “Have you ever heard of the Federal Reserve” and “have you ever heard of the Food Stamp program?” Well if you answered “yes” to question 3 then you already know that money grown from trees “pays for” the free lunches provided for in question 4. So if the government is in the business of using counterfeit money to pay for things like food stamps why should any of us care whether or not  food stamp recipients spend their monthly allotment of $450 or their no limits, Wal-Mart shopping binge total of $4050? Is there really any point to enforcing what should be a moral prohibition by legal force?

Well, funny you should ask because Senator David Vitter has goaded the Jindal administration into doing exactly that, urging Jindal to prosecute the “Wal-Mart 12,000,” “abusers” of the Food Stamp program for the late “shop til ya drop” fiasco in Springfield and Mansfield last month.

Ordinarily I would side with Vitter and I while do agree that the immorality displayed should be punished, I doubt a 1 month suspension from the food stamp program will have any lasting impact. That’s because those recipients, by and large. consider themselves “entitled” to the benefit. They and their boosters cannot see that long term use of the program is itself an outrage or at least it used to be.

In Dickens’ famous Christmas Carol story the immoral is played by the wealthy Scrooge who does not equate his selfishness with sinfulness while the moribund Cratchit family gives thanks for and is willing to give away a portion of their meager stores because that is what Christ commanded them to do. Does anyone expect that Vitter & Jindal’s punishment of the “Wal-Mart 12,000” will cause those “punished” to suddenly donate their gifts from the public to those even less fortunate? That’s as likely to happen as gold replacing trees as “money.” 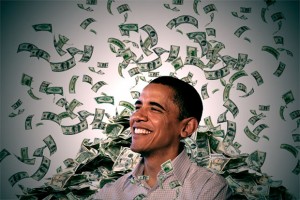