Mandeville, LA – Exclusive Transcript – Let’s stop right there.  Some of you are going: Okay, what’s the point?  Is there a punchline here, Mike?  Well, there actually is.  I have heard others who have won golf or football or baseball or basketball championships that say it’s the greatest moment of their lives.  Mickelson said, and he repeated it, said it twice that it was the greatest moment of his career.  Check out today’s transcript for the rest…

Mike:  I was very excited to see the final round yesterday of the British Open.  Andrew, did you watch the final round or did you stop watching because Tiger wasn’t in the hunt?

AG:  I stopped watching once Tiger started dropping back and Phil went on that run at 15 or 16.

Mike:  You weren’t interested at all in just the amazing set of golf shots that Mickelson put together at the end?  Some of that stuff was just unprecedented.

AG:  He’s kind of boring to me.  I am not not a fan, but there’s no impetus to necessarily watch Phil.

Mike:  Because Phil’s not a super athlete.  He’s not flashy like Tiger or some of the other guys on tour.  I’ll tell you what Phil is.  I tweeted this out yesterday and I want to do a small monologue on this and talk to people about this for just a moment.  He said something yesterday that I thought was — he actually said it twice.  He may have said it three times.  I didn’t get a chance to listen to the presser that he did before he accepted the Claret Jug and the R&A presented him with that trophy.

He said something to Tom Rinaldi on ABC that I thought was worth repeating.  I have the clip of Rinaldi.  I couldn’t find the one of what he said when he accepted the jug.  I was actually able to find a clip of what he said to Tom Rinaldi after he had won the tournament, or thinking he had won the tournament, then made his way into the interview room for CBS.  By the way, Andrew, to your recollection, is this the first time that ESPN has gone four days — the four days, Thursday, Friday, Saturday and Sunday, I guess they went on the air probably 6 a.m. Eastern, all the way until the last ball dropped in the hole, they didn’t miss a beat.

AG:  It’s always that quirky thing with the European tournaments, whether it’s Wimbledon or the French Open where ESPN or TNT or one of those cable channels have the live rights.  Then I think ABC or NBC or one of those stations would play the best of in the afternoon.  That was the case over the course of the weekend.

Mike:  So if I turned onto ABC yesterday afternoon they repeated it, is that what you’re saying?

AG:  Yeah, one of the broadcast channels had the day at the Open or something they played in the afternoon.

Mike:  They went wall to wall.  As a broadcaster, that’s a hell of a shift for Azinger and all those guys.  They went on the air at six and stayed till the end.  Anyway, Rinaldi is in this interview trailer where the players go and do interviews.  Phil Mickelson goes in there and gives an interview.  He’s still waiting for Lee Westwood to do his final meltdown and make it impossible for Westwood to mathematically catch him, which happened on the 17th hole.  The only way he could have caught Mickelson, the only possibility was that — was he playing with Stinson?  I think he was….

Let’s stop right there.  Some of you are going: Okay, what’s the point?  Is there a punchline here, Mike?  Well, there actually is.  I have heard others who have won golf or football or baseball or basketball championships that say it’s the greatest moment of their lives.  Mickelson said, and he repeated it, said it twice that it was the greatest moment of his career.  He was asked by Rinaldi: How do you manage being super dad?  AG, do you remember when he left the US Open at Medinah?  He went out there and practiced on Monday, and was it Monday night he had to catch a private jet and fly from Philadelphia back to San Diego — does he live in Arizona or San Diego?

Mike:  All the way back to San Diego so he could catch his daughter’s eighth grade graduation, and then had to fly all the way back to Philadelphia again the next day to get back to the tournament and still almost wins it.  Rinaldi asked him about this and Mickelson said: You do have to balance it and you have to have your priorities in order.  It’s difficult to do.  This is saying something, I think.  When he said it’s the greatest moment of his career, not of his life, it says to me that that particular individual, Phil Mickelson the golfer, has his priorities in order.  He knows that his professional life is but a part of his life.  He knows that his responsibilities and the greater part of his existence as a man and as a father lies in that life spent with the family and that life spent with those two little girls, that son, and his wife Amy.

For him to repeat that twice — he may not have thought anything of it, and no one else may have thought anything of it, but I thought something of it as soon as I heard it.  “The greatest moment of my career,” that’s just having things in order of priority that seems to be correct.  Not only is he a class act and a great representative — people are always saying you shouldn’t look up to sports guys and sports guys make rotten role models.  There are exceptions to every rule.  Yeah, there are a lot of sports guys that make rotten role models and shouldn’t be — there is no justification for them to be role models whatsoever.  Role models for what, their athletic prowess or role models for the way they live their lives, or a role model for the way they act and conduct themselves in public and private affairs?  By every indication, and yesterday in a very public display, I’d say that Phil Mickelson, for a change, actually provides a very good role model.  My friends, that is rare.  That is something that is very rare indeed in 2013, especially for a male athlete.

If we don’t point these things out – remember Winston Elliott’s admonition to us, and he was just repeating Russell Kirk, who was repeating some of Edmund Burke, who was repeating some of the great philosophers or history.  Winston Elliott is the editor of The Imaginative Conservative website, which is a great place to stop every day to get your daily dose of rationality and morality mixed with political conservatism, although there’s less of the latter and more of the former.  His admonition was as conservatives, we have to look for the good things in life.  You can’t run around all the time with a dark cloud over your head and it’s always thundering and the lightning is coming out of it.  There are beautiful things out there.  There are good things.  If you don’t point them out and if you don’t celebrate them and acknowledge them, then you get taken over by the bad.  You get taken over and influenced and led by the cynical and the destructive.

That event yesterday, the sporting part has a little bit to do with it, but the rest of the story, the Mickelson win and the way he conducted himself after the win, again is worthy of pointing out and acknowledging, and I think throwing some bouquets at.  Here’s just a little clip of — I’m not sure where to pick this up at — a little clip of his interview with Rinaldi after he wins.

Rinaldi: I know at the Scottish Open it was a 3-putter. But take me through what you’re feeling here.

Mickelson: I played the maximum break allowable to feed it in just barely. I 3-putted a downhill putt last week. And I just let that ball trickle in over the lip with the maximum allowable break. Right there, it’s just an amazing feeling right there. I’ll never forget this.

Rinaldi: Your caddie Jim Mackay in tears there.  You’ve been together so long.

Mickelson: Yeah, I can’t explain what it means to have a friend and a partner and a caddie as Bones. Then to have Amy, Amanda, Sophia, Evan here, it feels amazing to be able to share this great moment with them and to have somebody like Bones. He did such a great job this week managing clubs. There are three different clubs you can hit on every single shot dependent upon how much you move it into the wind or let it fall with the wind and what have you. He did a great job all week.

Rinaldi: You’ve talked about times, about how difficult it is to try to balance your professional pursuits and your ambition with the importance of being a father. We saw that at the U.S. Open when you flew back for your daughter speaking at the eighth grade graduation. They’re all here. How do you balance that out and then how do you describe a moment [Mike: Good question, good question.] when they’re all waiting for you off the green as they were today?

Mickelson: We do the best we can. We all want to have a — I think it’s important, to feel successful, you want to have a good balanced between your family life, your professional life, your career and what not. They’re really been supportive. That moment right there, that’s a picture I’ll put on the wall and every time I see it remember this amazing feeling.

Mike:  That’s a picture of him hugging with his, in an embrace with the wife and children off the side of the 18th green afterwards.  Good story, folks.  For once in sports, or for a rare moment in sports, a great story when there’s some class and I think some virtue there and things worthy of pointing out. 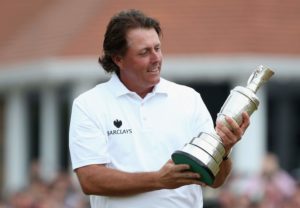