Mandeville, LA – Exclusive Transcript – Christie flies to Utah this Thursday.  He and Rand Paul and Paul Ryan are all going to Romney Palooza, a big hoop-de-doo gathering out in Utah that is hosted by the former candidate.  “Romney retreat to draw three GOP presidential hopefuls.”  The retreat is called the Experts and Enthusiasts event set for Thursday and Friday in Park City.  Check out today’s transcript for the rest…

Mike:  Christie flies to Utah this Thursday.  He and Rand Paul and Paul Ryan are all going to Romney Palooza, a big hoop-de-doo gathering out in Utah that is hosted by the former candidate.  I had the story in yesterday’s Pile of Prep.  “Romney retreat to draw three GOP presidential hopefuls.”  The retreat is called the Experts and Enthusiasts event set for Thursday and Friday in Park City.

Kirk Jowers, head of the University of Utah’s Hinckley Institute of Politics, told the Deseret News that the gathering will give the three Republicans a chance to stand out.

“I know Romney would never pose this as an audition,” he said, but the performance of the trio of potential candidates during the closed-door meetings “will make big impressions on Mitt and everybody else in the room.”

Blast From the Past: Interview With Congressman Ron Paul, 10 November 2010

Those missing from the retreat include Sen. Mario Rubio of Florida, former Sen. Rick Santorum of Pennsylvania and Louisiana Gov. Bobby Jindal.

Jowers said it’s unclear who may have been asked to participate but was either unable or unwilling to attend.

“The big mystery was who was invited and who declined,” he said of the closely guarded guest list.

Only invitees received an email detailing the “variety of unique industry, political and thought leaders” coming to the retreat. It will cost $5,000, a fee intended only to cover expenses.

Also attending will be corporate and academic leaders and even some Democrats, including President Barack Obama’s strategist, David Axelrod, and Colorado Gov. John Hickenlooper.

Tim Hagle, a political science professor at the University of Iowa, said of the three Republicans attending the retreat, Paul may be the closest to running…

Hagle said while the opportunity to woo supporters at the retreat “could be important,” he does not think it’s “essential” since it’s so early in the election cycle that it’s far from certain who will end up in the race.

Mike:  What supporters do you find at a Mitt Romney event called Experts and Enthusiasts?  The hoi polloi hate experts.  Now we have early Iowa that happens in Utah?  I’m just curious as to what is the goal of the event?  What are they supposed to accomplish here, solve world hunger?  That used to be the thing: Let’s get together and figure out how to solve world hunger.  I have a suggestion.  Maybe the best, brightest and smartest among us who will leave the peasantry and head off to wherever this Park City, Utah is planned, maybe they can figure out the currency crisis, especially the budding currency crisis that is about to strike when the Euro, which is teetering on the edge of, or the countries of the Euro are teetering on the edge of real insolvency this time.  What’s going to happen when the European economy finally goes totally belly up and the banks that have borrowed or are holding all of the Federal Reserve notes that Ben Bernyankme has printed and sent over there are then officially unable to repay?  Sound money could be a topic of discussion here.  I doubt it’ll happen.  Maybe they can have seminars on corpulent elected officials and how to deal with the physical and media appearances while you’re becoming less corpulent.  I’m joking, of course.  So that’s Thursday and Friday.

Of course, Rand Paul has just returned from a trip to the Reagan ranch in Simi Valley, California and a speech that he gave Friday night.  Did we cover this yesterday?  I know how this is being viewed by former fans of, well Ron Paul is still active so I can’t say former fans, but those who wildly and enthusiastically supported his father, when he goes out to the Reagan ranch and says: I’m not your grandfather’s libertarian.  I don’t hate all government.  As a matter of fact, I think $2.6 trillion worth of government is a pretty good deal.  I’m paraphrasing here, but that’s what he said: I am for spending what is currently being taken in, which is $2.6 trillion, and not a penny more.  We’ve got to learn to live within our means and spend only the $2.6 trillion.

Now, $2.6 trillion is an awful lot of government.  As we learned on this show yesterday when we discussed the impending bankruptcy of the Ponzi scheme scam that is known as Social Security, Social Security spent last year $784 billion.  That’s a little more than one-quarter of what Rand was talking about Friday legitimately spending from the federal leviathan, a quarter of it, a little more than a quarter of it.  That is an awful large peanut.  That’s a large acorn to roll down the tree and try to crack, isn’t it?

Of course, if you were to divvy up the $2.6 trillion, as I pointed out $780 billion, a little more than a quarter of it, has to go to Social Security payments and disability payments.  That only leaves 70 percent of the remaining money to be paid out.  With interest on the debt gobbling up another quarter of that — I believe the interest on the debt last year was somewhere in the neighborhood of $600 billion, and that’s with Bernyankme keeping interest rates at near zero.  You’re almost over the halfway mark.  You haven’t even turned lights on on the Washington Monument and you’re almost over the halfway mark if you spend a mere $2.6 trillion per year.

There would have to be a serious — I’m bringing this up because there are going to be those who will say, [mocking] “Come on, $2.6 trillion, that’s $2.6 trillion too much.”  Well, if you want the general government to spend $0.0 every year, meaning it is no longer organized and in effect, I could help you make a case for that.  We could do that.  That’s a great exercise.  While it is still in existence, while it is still pretending to govern, think about the enormity of a $2.6 trillion versus a $3.8 trillion amount of government.  Just think.  There’s a gap in there.  It varies between CBO estimates and what have you, but there’s from $1 trillion to $1.2 or $1.3 trillion difference between what Rand Paul is talking about, senator from Kentucky, and what is currently being spent.  That is an absolute Mount Everest-sized mountain of Ben Franklin hundred-dollar bills.  That’s an awful lot of meddling, not only in foreign affairs but in domestic affairs.

As a matter of fact, Andrew, that exceeds Rand’s first proposal for a cut in federal spending, which was $900 billion.  Remember this when he was first a member of the United States Senate?  Then he trimmed it down.  Another offering was $600 billion or somewhere along those lines.  He was able to get 13 votes to go along with him.  How many votes do you think you can get to cut $1.2 trillion off the top?  I would say that puts him probably $1.2 if not $1.4 trillion ahead of Paul Ryan, Rick Santorum, and the rest of the erstwhile or projected 2016 field.  That is quite a position to have carved out.  While Rand is simultaneously being knocked for not being libertarian or not being “conservative” enough, cutting $1.2 trillion, saying you need to do without $1.2 trillion seems to me to be an enormous leap forward.  As a matter of fact, I’d say it’s so enormous that it is an impossibility.

What is the possibility that that could actually happen with today’s crop of members of Congress and the Senate?  I’d say the chances of that happening are slim, none, or (audio – Dean Wormer of Animal House) “Zero point zero.”  It does have the advantage of being the first one to actually put something concrete or something tangible that you can actually look at and see and mull around and theorize and fantasize about — in our instance fantasize about — far ahead, light years ahead of any of the competition.  It seems to me that maybe that was the point of the trip out to Simi Valley and the Reagan Library.  If I hear him say that again, I’m going to lock that in and say: I get it, I know what’s going on here. 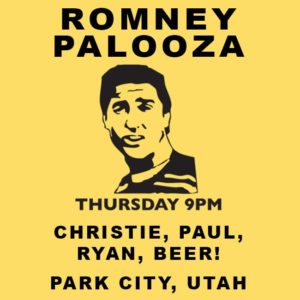