Mandeville, LA – Exclusive Transcript – This story here in The Atlantic, Mike Lee, talking about how the GOP has got to part with spin and personality.  Well, now, Lee is wise to say this because spin and personality are what?  What is that?  That’s sophistry.  It means nothing.  All it does is allow people to use the term “conservative” to personally and monetarily benefit from it.  In other words, it’s nothing more than a marketing slogan.  He’s right.  Check out today’s transcript for the rest…

Mike:  This story here in The Atlantic, Mike Lee, talking about how the GOP has got to part with spin and personality.  Well, now, Lee is wise to say this because spin and personality are what?  What is that?  That’s sophistry.  It means nothing.  All it does is allow people to use the term “conservative” to personally and monetarily benefit from it.  In other words, it’s nothing more than a marketing slogan.  He’s right.  He gives a speech at the Heritage Foundation last Tuesday.  He gave a very harsh criticism of his colleagues in the Grand Old Party.  Listen to this, Lee said this:

“As the decades pass and a new generation of Americans face a new generation of problems, the party establishment clings to its 1970s agenda like a security blanket.  The result is that to many Americans today, especially to the underprivileged and middle class, or those who have come of age or immigrated since Reagan left office the Republican party may not seem to have much of a relevant reform message at all. This is the reason the GOP can seem so out of touch. And it is also the reason we find ourselves in such internal disarray.

“The gaping hole in the middle of the Republican Party today—the one that separates the grassroots from establishment leaders—is precisely the size and shape of a new, unifying conservative reform agenda. For years, we have tried to bridge that gulf with tactics and personalities and spin. [Mike: I got news for you, Senator Lee, we’re trying even harder to bridge it with tactics and personalities, too many personalities, and spin.] But it doesn’t work. To revive and reunify our movement, we must fill the void with new and innovative policy ideas. Today, as it was a generation ago, the establishment will not produce that agenda. And so, once again, conservatives must.”

This elides the degree to which the GOP has gotten more conservative over the years. The failure of the Republican Party has been, in large part, a failure of conservatives. But let that pass, for Lee has his own vision for the future.

Mike:  Folks, I’m just going to repeat this because I think it is the most important point that we can make here.  Conservatism and conservatives have become intellectually lazy.  It’s way easier to just hurl out bumper sticker slogans, call people socialists and communists and what have you than it is to actually explore the intellectual basis for conservatism, let me expand that, the intellectual, traditional, and spiritual basis for conservatism.  No one wants to touch that spiritual part with the proverbial ten-foot pole because someone on NBC or CBS or MSNBC or the Huffington Post is going to call you a religious fanatic.  Didn’t Jesus tell us, didn’t our Lord prepare us to become martyrs?  Isn’t that exactly what he said was going to happen?  But for political expedience, we say: We can’t go down that road; we have to keep all this stuff separate.

I don’t think you should keep your religiosity separate from your politics at all.  I think you should keep your religion out of your proposals, but that doesn’t mean you’re not inspired and living your life as a humble member of that great family from which you came, God’s family.  This is important stuff.  You people out there snickering right now, some of you reaching, [mocking] “That’s it!  I’m an anarcho-capitalist.  I don’t have to take this religious claptrap.  I’m going to the other.”  Go ahead and go.  Don’t let the door hit ya where the good Lord split ya.  This is, to me, the central issue of the failure of conservatives to be able to hold the line on most of anything.  We are intellectually lazy and we cannot defend with spiritual and factual and historical knowledge as our weapon, as our tool to say: No, and here’s why.  Instead it’s easy to point [mocking] “You’re doing that and that’s gonna result in this, and it’s not gonna work.”  Or [mocking] “Those people over there did that, and because they did that, that’s bad.  Besides, those people that did that, we don’t like those people.”

When the conservative, as Kirk teaches us and as Burke taught us, and as Aquinas wrote, as Augustine wrote, the conservative stands on the shoulders of giants and is confident in that stance.  We like to stand on the shoulders of founders because we view them to be giants.  Why?  What thought process made them giants.  Several people today, [mocking] “I don’t think the founding fathers wanted it to turn out like this.  I don’t think the founding fathers did this.”  Okay.  Can you answer the question that I always ask: Why?  Why did Henry say that?  Why did Madison say that?  Who was informing Henry and Madison?  Who informed Jefferson?  [mocking] “They just made it up.”  No, they didn’t!  When you can answer the why, you’ll have many of the answers you seek.  But that doesn’t mean you’re going to win every political battle.  As a matter of fact, what you’ll probably find out is most political battles you don’t want any part of.  You don’t think that some of the things being discussed belong in the realm of politics.

As a matter of fact, if you want to read something really interesting, I tell you what, I’ll find it for you and post it for you at MikeChurch.com today.  Read Madison’s Of Ancient And Modern Confederacies.  When James Madison wanted to call this thing called the Philadelphia Convention and he wanted to propose and get his countrymen to go along with a new central government, he didn’t just make that up.  Before he sat down and made his proposals, he actually did months and months of reading and research.  From that, he called what he thought were the best of the best, what had gone before.  In other words, he relied on history.  He wrote all about the Helvetic Republic.  He wrote all about the Roman Republic and then as it collapsed into the Roman Empire.  He wrote all about the Peloponnesian War.  He was influenced by a guy named Plutarch, who was Earth’s first historian, we are told.  He wrote all about the Hellenic Republics, and there were thousands of them, that made up ancient Greece.  This is what informed little Jimmy Madison.

Little Jimmy Madison was also a student of the great Reverend John Witherspoon at Princeton University.  When you went to Princeton, what did you study?  You studied Latin and Greek.  It was like most universities were at that time.  They were seminaries.  They treated those kids as if they were going to enter the clergy.  Not us, though, no.  We’re smarter than that.  We don’t need any of that.  All we need to do is read the latest book written by the latest radio or television host, some guy that works at the Heritage Foundation who’s going to quote some things, and probably quote them out of context.  What Lee is talking about, I think, is essentially correct.  Back to what Lee said:

I submit that the great challenge of our generation is America’s growing crisis of stagnation and sclerosis—a crisis that comes down to a shortage of opportunities.

This opportunity crisis presents itself in three principal ways:

A Republican Party that prioritized proposals to reform “cronyist privilege at the top,” immobility among the poor, and insecurity in the middle class would be a huge change. What about specifics? What is Lee actually proposing? Four new bills, it turns out.

Mike:  Senator Lee proposes tax reform geared at families.  Andrew, I know you and I are on the same page with this.  We propose and agree on a flat tax, right, one flat tax rate, correct?

AG:  That would make sense to me, yeah.

Mike:  Well, Lee is of the same opinion but he breaks it into two brackets.  His plan calls for:

A 15 percent tax rate on all income up to $87,850—or $175,700 for married couples. Income above that threshold would be taxed at 35 percent. Like any good conservative tax-reform plan, my bill also simplifies the code, eliminating or reforming most deductions. But the heart of the plan is a new, additional $2,500 per-child tax credit that can offset parents’ income and payroll-tax liability.

Mike:  There’s lot of good stuff here.  I’m a proponent of the flat tax with no deductions.  You can have a graduated rate, though, or a graduated scale where it becomes applicable, but a flat tax, or preferably elimination of the whole damn thing, elimination of corporate taxes.  Go back to excises, duties, and imposts. 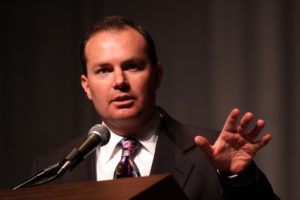