Mandeville, LA – Exclusive Transcript – Let us now go to the Dude Maker Hotline and say hello to Senator Rand Paul, senator from the great State of Kentucky on a bright and beautiful Thursday morning.  Check out today’s transcript for the rest…

Mike:  Let us now go to the Dude Maker Hotline and say hello to Senator Rand Paul, senator from the great State of Kentucky on a bright and beautiful Thursday morning.  Senator Paul, great to have you back, my friend, how are you?

Senator Rand Paul:  Good, Mike, glad to be with you.

Mike:  A couple things that are front and center that you have been dealing with lately, and a couple questions I have on them.  You are quoted in the Washington Times as saying something to the effect that you don’t know when the NSA is now lying to you and you would like to know when they are lying to you and when they are telling you the truth.  Can you expand on that a little bit for us?

Senator Paul:  In March of this year, the Director of National Intelligence James Clapper came to the Senate and he was asked directly by Senator Wyden: Are you collecting data on American citizens?  He said no.  Interestingly, he had been prepped for the question.  Senator Wyden’s office called him in advance and said: We are going to ask you if you’re collecting data on Americans.  It wasn’t like he fumbled around and kind of gave a wrong answer.  He just decided to lie.  When he was caught in the lie, he said: Well, I said the least untruthful thing I could think of.  That does make us a little bit skeptical of what they’re saying.  The question then becomes, he said: It was an unclassified hearing, so I couldn’t tell the truth.

Let’s say I’m at a classified level and they come to me but it’s at a top secret level.  There are levels above the senators.  There are things they will tell the intelligence committee they won’t tell the rest of the senators.  Does that give them the ability to lie to all senators and then tell the truth to the intelligence committee, or lie to the intelligence committee and only tell the super, super top secret truth to somebody else?  I think once you start lying, you lose your credibility.  I think that’s where we are now.  I’m distrustful of them and I think that’s sad.  I know they’re trying to do the right thing and I do want our government to stop terrorists, but I want them to be truthful and honest because it’s an amazing and enormous power and I don’t want that power used against innocent American citizens…

Mike:  Does that then trouble you as it troubles me?  I understand that there are needs to keep some state secrets.  I don’t suspect that Senator Rand Paul has his photocopy of the nuclear launch codes for the silos in Idaho, right?

Senator Paul:  Yeah, it depends on what we’re talking about.  One thing I’ve said about the leaks is that if someone had leaked names of agents, I think that’s inexcusable.  If someone leaks computer code that describes how to get into our computers or evade us, I think all of those things would be absolutely punishable.  If someone talks about a program that the head of the National Intelligence is lying about and they believe the only way to get out that the Constitution is being violated and lies are being told to the public, that’s a question of whether civil disobedience is appropriate.  Only the person who has to suffer either exile or the repercussions can make that decision.  I think ultimately history will make the judgment on that.  Who was more in the wrong or more in the right?  Who’s more of a hero or a villain, the intelligence director who lied to the director about the program or the person who leaked the lie?

Mike:  That’s a great analogy.  You are famously quoted as saying something to the effect if a guy’s coming out of a liquor store and he’s just robbed it and he has a gun in his hand, I don’t mind the drone being used to take him out or whatever needs to be done, and that the drone can be used as nothing more than a law enforcement tool.  You didn’t have a problem with that.  Based on what we heard yesterday from Director Mueller about the FBI using drones and then being very abstract about it, [mocking] “Don’t worry, it’s very seldom and very minimal,” would you care to address that for us?

Senator Paul:  I think my biggest concern with the FBI director admitting they’re using drones, they asked him whether he had any plans in place to protect Americans’ privacy and he said: We’re working on that.  They’re using the drones but they have not yet developed the rules on how to protect our privacy.  The other question I have on it is whether the Bill of Rights is being enforced, and whether or not they’re getting warrants to do these searches.  There’s a big legal question that’s been out there on open spaces.  I think this needs to be revisited.  My backyard, swimming pool, hot tub, where I go to hunt, all of those spaces I don’t think are non-private.  If I own them, they’re mind and you only get to look at me or my friends or my family on my land if you get a judge’s warrant.  The courts have been going the other way on this, saying you can look without a warrant if it’s open space.  I think that needs to be revisited.

Going back to the liquor store analogy, I think this has been misinterpreted by a lot of people.  Anytime there’s a firefight, when people come out of a store and someone is shooting at the police, the police always have the ability to shoot back.  The point I was making is it doesn’t matter what kind of technology they use.  What I was imagining or thinking about was actually some kind of robotic gun that can hover outside the police car and shot so the police don’t have to get out of the car to shoot back.  We already have things like this to protect policemen that I’m in favor of.  For example, if there’s a bomb that needs to be diffused, we now have robots that do the work.  That’s essentially a drone.  It’s being operated without someone standing there touching the robot.  There will be instances where people are under fire and people are firing back and forth where there will be mechanical or robotic ways of trying to respond.  That’s all I was mentioning there.

It is different.  When you have an imminent threat of death to policemen and they’re trying to protect either the owner of the store or a situation with a hostage, there will always be means.  Let’s say there are a hundred people being held hostage in a building.  If there’s a drone small enough they can send in through the air ducts to get the hostage taker and kill them somehow or kill the person that’s threatening to kill the people, things like that are going to occur as technology develops.  That’s a far cry from talking about hellfire missiles and drones at 50,000 feet.

Mike:  Indeed.  Your speech at the Faith and Freedom Conference the other day, there is a war against Christianity and the American taxpayers are funding it.  I’ve been talking about this for quite a while and so have many others.  Your opinion on this, though, number one, how is this justified?  Number two, how can it be stopped?

Senator Paul:  I think it’s an important point to be made, particularly for Christians.  Some of the Christian community have been eager for war to protect Israel.  I think it is reasonable to talk about things to try to do to prevent people from invading Israel or invading other countries or invading the U.S.  They need to realize that as we get involved in different wars, particularly in Syria, I’m not saying there are good guys on either side of the war, but I do know that there are about two million Christians that tend to have sided and been protected by Assad and live near the Alawites.  They will be in the middle of this war, and they already have been in the middle of this war.  There are already instances of Islamic rebels killing and massacring Christian villages.  When people start talking about arming the Islamic rebels, they need to realize that they’re going to be killing Christians.  There’s also a war on Christianity in that we give billions upon billions of dollars to Islamic governments around the world who do persecute Christians, either for alleged blasphemy, for their religious practices, for their marriage practices.  I think Christians need to be aware of what’s going on.

Mike:  I most certainly concur.  Two days ago I was watching Fox News and one of the hosts said something to the effect that Edward Snowden is indeed a traitor because he is aiding and abetting our enemies.  She cited China and Russia.  I shook my head and went: Excuse me, when did China and Russia become our enemies?  Senator Rand Paul, are China and Russia enemies of the United States?

Senator Paul:  No, but I would say China is our biggest trading partner and Russia is a big trading partner.  I think it’s best not to refer to them flippantly as enemies.  However, that being said, I think it will be an enormous mistake if the person leaking the documents is then leaking them directly to a foreign government.  That then does create serious differences in what exactly is going on here.  I hope that doesn’t occur.

Mike:  Understood.  I know we’ve got to wrap it up.  How’s your father?

Mike:  I know you’ve got to go.  I appreciate your time.  Thank you very much.  That’s Senator Rand Paul on the Dude Maker Hotline, short, concise, and to the point. 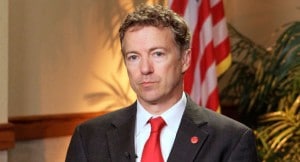