Mike:  So what I said was dismantle the whole Navy; don’t have one.  Don’t ever have an Army again.  If someone does decide to attack us, lay down our arms and let our women and children guard the borders and everybody to stop the invasion force so that none of us actually have to do any fighting.  That’s what I said.

Mike:  That’s exactly what I said, that’s right.  I don’t want to have any trade or commerce with the rest of the world; I said that.  Don’t want to have any naval vessels on the high seas; I said that.  Let’s begin the process of mothballing the rest of the Navy; I said that.  Here’s the only problem: I didn’t say any of that.  You can’t even intimate – I asked a simple question about the Zumwalt carrier.  That’s what started all this.  Then we were informed that the Chicoms are coming to kill us.  And I don’t deny that there are Chinese communists, and there’s probably a significant amount of espionage that’s going on right now, and that China is a force, by the sheer mass, the numbers of people.

It’s not as though the Chinese are just new.  Last time I checked, the infiltration of China has happened through California.  They have places in the United States called Chinatown.  It’s not as though we don’t have some experience with the Chinese and they haven’t been around for an awful long time.  As I was pointing out to you – I can’t remember the name of the documentary series, but I actually watched a documentary series on The Learning Channel or the History Channel back in the day that covered the naval superiority – at one point in time the Chinese, before they were Chicoms, had such a large – one of these dynasties had such a large and overpowering navy, they actually did think they could take over the world.  An armada set sail for Africa.  It didn’t turn out so well.  As a matter of fact, it went so poorly, their attempt to take over the trade around Africa, it went so poorly that their dynasty and their naval superiority was never built up again.  At one point in time they were the envy of the world.

I simply asked the question about the Zumwalt.  As usually is the case here when we try to break it down and talk about just wars and getting back to the first principle: What is the truth?  Is there a truth?  Yes.  Can I know it?  Yes.  Can I repeat it to someone?  Yes.  It used to be the job of the Christian to do this.  Now you’re just mocked and made fun of and told to shut up if you do that.  I love that, Dr. George. 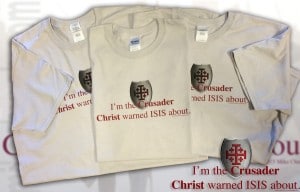 Mike:  I’m not sold on Washington’s Christianity because of what happened when he died.  Professor Gutzman and I talked about this.  However, publicly speaking, in his writings, he certainly projected that for a people that wanted it to be projected.  The point that I was making at the end of last hour, that George Mason refused to sign the Constitution, the reason that he refused to sign it is because, as I said he said – this is in my movie Spirit of ’76.  You can get it on DVD in the Founders Tradin’ Post while you’re making your donation to Hogs for the Cause this year to help provide cash grants for families that have children suffering pediatric brain cancer.

In any event, what Mason said was he didn’t have any reason to fear his country.  He had reason to fear future generation of countrymen.  I think Mason was correct.  To me the amazing part about this – it’s not amazing, it’s sad.  What is the sad part about this is that it seems almost as though we’re being – I’m told, and if you’re telling this to me and I can argue with the best of them.  I try to maintain some humility in these arguments.  If you’re telling me that we don’t want to hear your thought processes, we don’t have time to deliberate, we don’t have time to hear your stupid lectures on philosophy or truth – I know what the truth is.  The truth is that [mocking] “We have enemies and we’ve gotta kill ‘em, gotta kill all of ‘em.”  That’s what the truth is.  There’s no truth beyond this alleged truth.