Mandeville, LA – Exclusive Audio and Transcript – This Clip of The Day was originally aired and published on Aug 2,2012 and is part of the Founders Pass Flashback Collection.

Steve in Georgia thinks that the Founders put God in the Constitution… well you have Amendment One, making sure that if someone tries to add God in there, it’s not going to get added in.  You could say the preamble, “to secure the Blessings of Liberty to ourselves and our Posterity,” blessings are in there — I don’t know if he means real or spiritual blessings, Gouverneur Morris, who wrote the preamble — “do ordain and establish this Constitution for the United States of America.”   I do not know where God is in the Constitution.  I have to make that point, so the rest of what you say can’t be predicated on God being in the Constitution.  You may say that God-fearing men wrote it.  Sure.  No one is arguing that.

Caller Steve:  Doing pretty good, how are you?

Caller Steve:  My comment is, I actually have two.  One is, when the Constitution was written by the founding fathers, they put God in the Constitution, so therefore, in my opinion, I believe them to be moral and ethical men.

Mike:  Where did they put God in the Constitution?

Caller Steve:  Well, I don’t have the Constitution in front of me.

Mike:  It’s not there.  To make it explicit, you have Amendment One, making sure that if someone tries to add God in there, it’s not going to get added in.  You could say the preamble, “to secure the Blessings of Liberty to ourselves and our Posterity,” blessings are in there — I don’t know if he means real or spiritual blessings, Gouverneur Morris, who wrote the preamble — “do ordain and establish this Constitution for the United States of America.”   I do not know where God is in the Constitution, sir.  I have to make that point, so the rest of what you say can’t be predicated on God being in the Constitution.  You may say that God-fearing men wrote it.  Sure.  No one is arguing that.  What’s your point?

Mike:  No, I don’t think they would have thought that because they didn’t discuss it.  The issue of marriage, to my knowledge, and I’ve read all the events that transpired between 14 May 1788 and 17 September 1788, the two dates denoting when the convention began and when the convention adjourned sine die, as George Washington said.  No, there was no debate over marriage.  There was no debate over inserting that into it.  Do you know why?  I don’t know where you got this God in the Constitution version at, Steve, but it is sincerely and severely misguided.  There is no God in the Constitution.  It is a plan of government.  I know that there are religious sects out there that believe it was inspired by God and it’s a holy document.  You are free to believe that.  I choose not to spend my time arguing with you over it, because I’m probably not going to convince you of it anyway, because it’s an article of faith.

The meeting that was held, first of all — there’s so much propaganda and lies and misinformation out there.  I could spend the rest of this show talking about that last call and I would run out of time.  I would not get all my thoughts out.  Let’s just go through a couple things here, shall we?  Number one, there was no such thing as a flipping constitutional convention.  Whoever told you that mischaracterized it, either innocently because they didn’t know or they heard someone else say it, or deceitfully because they have an agenda.  The commission that were written to attend a meeting of delegates representing the 13 states to be held on the second Monday of May next in the City of Philadelphia to discuss the exigencies of the government and amendments that may be proposed.  Therefore, it was nothing more than a federal convention.  As a matter of fact, the bible of the federal convention, 1787, was written by a guy named Max Farrand.  If you don’t believe me, do your own due diligence.  Don’t send me letters and ask me to do it for you.  I’ve already done it.  It’s in my movie Spirit of ’76, Max Farrand, Farrand’s notes.  There are four volumes.  In those volumes, you have all of the documentary history of the Federal Convention of 1787.  That’s what it’s called.  There was no such thing as a constitutional convention.

Second point: delegates that were there were mortally shocked when James Madison and Alexander Hamilton, well, it wasn’t Madison, it was Governor of Virginia Edmund Randolph, proposed what we know today as the Virginia Plan, which they showed up with the plan.  They didn’t show up with amendments.  In other words, Madison was deceitful and so was Hamilton.  They fully intended to write a new plan of government.  They basically conned the representatives from the other states into going to this convention to propose amendments when amendments were not on their docket.  When the plan of government was discussed during the ratification debates, that’s what it was called, a plan of government.  Nobody called it the federal government.  They didn’t call it the federal government; they called it the new plan of government to be organized under the Constitution.

These fairy tales that — who is out there that is still promoting this, these fairy tales that these guys were sent here on the wings of angels to save us from ourselves?  There’s an awful lot of history that was written contemporary, around the time of the federal convention, that defies any notion or any of the conventional wisdom that we accept today that the 13 states were basically at war with one another, that there was widespread contempt and misery and that thank God men got together and gave us a brand new central authority to all live and then ultimately suffer mightily under.  That is just a pile of propaganda.  I know where it comes from, too.  It comes from Madison and Hamilton and General Henry Knox and other propagandists of the day.  There was a bunch of Rahm Emanuels around 1786.  They saw Shays’ Rebellion.  Never let a good crisis go to waste, right?  They used Shays’ Rebellion, [mocking] “We gotta have a meeting, man, this Shays’ Rebellion thing here.”

I read contemporary histories of Shays’ Rebellion.  Shays’ Rebellion was over legally-imposed taxes by the legislature of Massachusetts and its governor at the time, Thomas Bowdoin.  Bowdoin was trying to pay down war debts and decided, [mocking] “I think I’m going to tax those people out in the Western lands.”  Daniel Shays, a decorated veteran of the Revolutionary War.  Shays was so decorated — most people don’t know this.  Shays wasn’t some Johnny-come-lately scallywag.  Shays was an honorable man.  He just thought he was being wronged by his state and he ought to stand up to Bowdoin and the big taxers in Boston that were trying to extract taxes from people that had actually made the revolution possible, and had either gone and fought and died or had survived and been wounded and bled.  Most people don’t know this, but the Marquis de Lafayette, after the Battle of Saratoga, said Daniel Shays fought so bravely in it, he gave him his sword.  Marquis de Lafayette gave Shays his battle sword.  Do you know what Shays ultimately had to do with it?  He had to sell it to pay Bowdoin’s taxes.  Shays’ Rebellion was used to organize a convention to fix this and that and the other.  Why do you think Patrick Henry, George Mason and other brilliant men fought against ratifying the Constitution?

You people that think that the Constitution is this generous, heaping helping of rights and that’s what it stands for, it’s not.  It is a plan of government, a good one, a great one, probably the greatest one ever devised, but it is simply a blueprint for how to operate, organize and divide power amongst people that have a common kinship and have some common problems that they want government to solve, like defense and currency and free trade.  That’s all it is.  If we viewed it as such, we’d have a lot less problems because we wouldn’t have people running around insisting it’s a charter of rights and we have to argue over where we get the rights, if they come from Thomas Payne or God, from James Madison or Jesus.  It’s a plan of government, a great one, but that’s what it is. 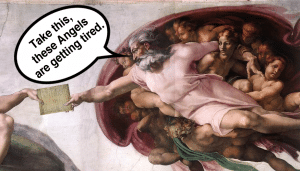 Perzactly correct. The constitution is a blueprint for a government. The monstrosity we have today in no way resembles the government so described and deliniated. Yet, to tear it down and attempt to rebuild would probably destroy what’s left, since half of the sheeple have become dependent upon the national teat. It would be less destructive and more expedient for states desiring a constitutional republic, to file for divorce from the existing abusive spouse the ‘national authority’ (one of Lincoln’s favorite terms) and start over. Mom, told me, ‘giving birth is easier than raising the dead.’ America, ur gubmint is killing ur country. Secession was our founders solution to tyranny, shouldn’t it be ours?

Yep. Thanks Mike, for providing that discussion. I think an interesting argument could be made (by anyone with a mind to do it) that God inspired the Constitution. But the idea that God is in the Constitution has led a lot of people into treating government as their (or part of their) Church. Where politics is allowed to go as a result is awful.

I don’t want to start an argument over whether the distinction is merely semantic (God inspired -> God touched -> God (in spirit) is in …). The practical affect is huge and obvious. With (pseudo-) moralistic arguments, “social conservatives” have been led to supporting far-left government-power expansionism, with religious fervor.

With regard to that practical affect: “Government enforcement of personal responsibility”, a central part of the “social conservative” mantra, with government having the power to arbitrarily decide what your personal responsibilities are is not just immoral, it’s an oxymoron. It’s far-left, and not a message from God.