Mandeville,LA– This Founders TV Episode was originally published on May 14,2013 and is part of the Founders TV/ Post Show Show.

Mandeville, LA – Exclusive Video and Audio – McCulloch vs Maryland was a landmark decision by the Supreme Court of the United States in that it put the power to tax in the hands of the Federal Government instead of the states so when Chief Justice John Marshall said “The Power to Tax is the Power to Destroy” he was actually talking about the STATES! McCulloch vs Maryland happened at a time when the states were seen as the enemy, when they were the ones who were taxing people and the Federal Government was seen as the hero riding in on it’s white horse to save everyone. It also happened at a time when there were men who were acting to STOP the states, and the Federal Government, from becoming tyrannical, men like George Washington, Thomas Jefferson, and James Madison. Now the power has swung 180 degrees, as the power to tax lies, unfortunately, with the Federal Government. For more on this be sure and check out today’s Founders TV and sign up for a Founders Pass if you don’t already have one! 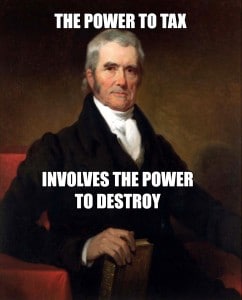 Thanks so much for your work. I am one angry citizen right now and yet I have no outlet to vent this anger. It is clear this current administration has been successful in implementing its plan to destroy this great country. I have doubts if this destruction can ever be reversed.