Mandeville, LA- Now, you want to talk about flags?  You want to talk about fear?  You want to talk about it outright bigotry?  I said this in the first hour and I was joking, but maybe I wasn’t joking.  Donald Trump needs someone to beat up, someone that mass media will approve of.  Try Jesus.  No one will defend him.  Try his father, Almighty God.  He didn’t create humanity.  No, it was an accident.  Gelatinous blobs of amino acids made marriage, sure it did. … Check out today’s transcript AND Clip of The Day for the rest.

Mike:  So yesterday the Viacom Corporation – if you’re wondering what all the falderal is about – decided they are no longer going to air the reruns of the Dukes of Hazzard TV show.  This was a suggestion that I had made in a post, in a joke two and a half weeks ago, but Viacom has taken it seriously.  I was relating last hour that if you’re going to take the Dukes of Hazzard down and Walmart is not going to sell Dukes of Hazzard stuff and[private |FP-Monthly|FP-Yearly|FP-Yearly-WLK|FP-Yearly-So76|Founding Brother|Founding Father|FP-Lifetime] Amazon is looking to get rid of any vestige of Dukes of Hazzard, Warner Brothers has said they won’t license any more Dukes of Hazzard stuff.  This is just madness.  It’s madness.  Not that our existence is contingent upon being able to purchase things that have rebel flags brandished on them.  It is the principle behind this.

Let’s just say for a moment that I concur with Professor Gutzman’s statement on the show last week that he understands the reason why people are upset about that particular flag in that it was flown in defiance of the Civil Rights Acts and ends of the Jim Crow laws.  Some people were denied services as a result of it.  There were some atrocities that were committed under it.  Let’s just say that I were to concur for just a moment and say I understand.  And I did, I said I understand some people’s genuine concern over it.  I would not be a good Christian or a good Catholic if I did not say that I understood and wished not to cause that kind of pain to anyone.

However, why is no one concerned about the pain God is suffering today?  What about the pain and the fear, mortal fear, temporal fear, corporeal fear that is in the hearts of tens of millions of people today as they see another flag rising?  That flag is rising as a flag and a symbol to mock their Christian God, and to inform them that blind allegiance and faith to that Christian God stands in stark defiance of that flag raising.  [mocking] “That flag rises to obliterate your little puny, supernatural attractions and attachments to your religions, your made-up religions, your fake God, your fake crucifix and your fake Blessed Mother.  You won’t have that freedom.  You’ll do as we say.  You’ll pray as we tell you to.  You’ll marry as we tell you to.”

This flag that I described rises in defiance to Almighty God himself, doesn’t it?  It rises in defiance to 7,000 years of recorded history under which Almighty God had a very strong and fast rule of what a family is, and who it is who can make one, and what institution under which that family becomes sacred, blessed.  The flag that I’m describing rises above that 7,000 years and mocks it and dares it to show its ugly “bigoted, homophobic” head.  And if it does, and if you do, [mocking] “We’ll come after you and your silly little God and your silly little, how do you say it, Mr. Church?”  Magisterium, sir, Magisterium.  Yeah, that.  The flag that I’m talking about rises ascendant today over a former Christian nation.  It ain’t Christian anymore, buddy.  The flag that I’m talking about mocks the mercy of Almighty God.

Almighty God struck an entire race and civilization of men, save for seven souls, down as a result of what?  Homosexuality, promiscuity, name the vice of the mortal sin.  Oops, I’m going to hit the reset button here.  How about a flood?  Great idea.  After the flood had cleansed and eradicated those that were in defiance of Almighty God, the book of Genesis tells us what?  As a promise to man that he would not flood the world again, he gave us a rainbow.  I will show you the beautiful colors of all the earth and the sky as a sign of my mercy that I will not destroy humanity, my creation, again.  Accept this rainbow.  Today that rainbow, festooned, dyed into, sewn into a flag that rises ascendant, rises ascendant over a defeated, formerly-Christian people.  If you look at that flag and do not have the fear of a martyr in your heart, you don’t know what a martyr is and you don’t know what a Christian is.

Now, you want to talk about flags?  You want to talk about fear?  You want to talk about it outright bigotry?  I said this in the first hour and I was joking, but maybe I wasn’t joking.  Donald Trump needs someone to beat up, someone that mass media will approve of.  Try Jesus.  No one will defend him.  Try his father, Almighty God.  He didn’t create humanity.  No, it was an accident.  Gelatinous blobs of amino acids made marriage, sure it did.  And we have the unmitigated gall and audacity to bow down before and to surrender to people that wave that symbol of disgust, disdain, and outright blasphemy at our God.  [/private] 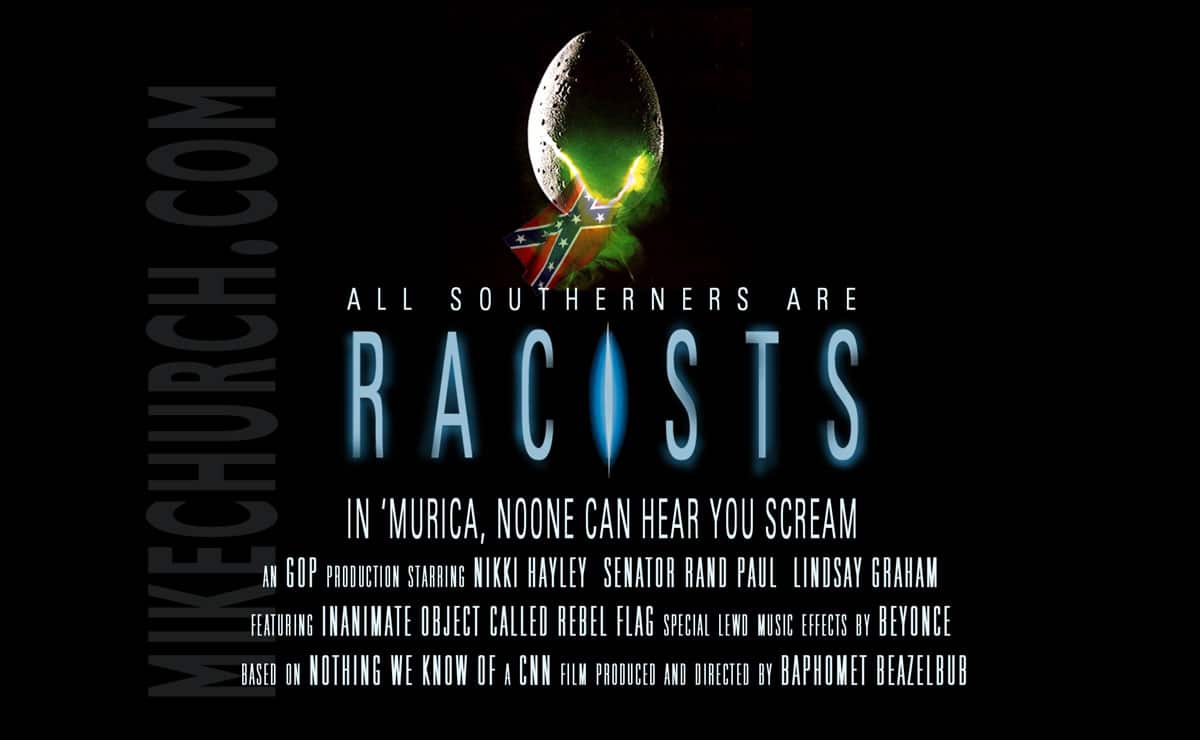 The Other Other Offensive Flag