On this day in 1790, the first patent act was signed by President Washington. This was the first law giving inventors rights to their creations. The Patent Board granted patents for “any useful art, manufacture, engine, machine, or device, or any improvement thereon not before known or used” and granted them if they deemed “the invention or discovery sufficiently useful and important.” The first board members were Thomas Jefferson, Henry Knox, and Edmund Randolph. The Department of State administered the patent laws. Fees were between $4 and $5 and the board decided on the duration, with a maximum of 14 years. 1

In 1849 on this day, Walter Hunt of New York City patented the safety pin, patent #6281. Hunt’s safety pin was made of wire with a spring on one end and a clasp on the other. Hunt claimed it was designed to prevent injury to fingers, hence the name safety pin. He also invented a flax spinner, knife sharpener, streetcar bell, artificial stone, ice ploughs, and the first sewing machine, although he did not patent it because he feared his invention would put hand sewers out of work. 2

On this day in 1845, what was called the “Great Fire of Pittsburgh” destroyed a third of Pittsburgh, Pennsylvania. The cause of the fire was an unattended fire lit to heat wash water. It was a windy day and a spark ignited a nearby shed, quickly spreading. As many as 1200 buildings were destroyed and left 12,000 people homeless but only two reported deaths. 3 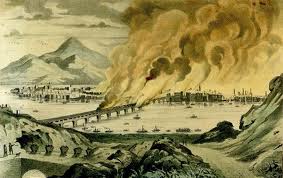