One notable birthday on this day in 1731, that of Robert Treat Paine. Paine was born in Boston, the son of a pastor. At the age of 14 he studied at Harvard and later studied theology and then law. Early on, Paine took an interest in the disputes between Britain and the colonies. He was a member of the convention of 1768 in Boston. Paine was employed as prosecutor of Captain Preston for the happening of the Boston Massacre. Paine served as a representative to the General Assembly and then to the Continental Congress. Paine served on a number of committees as a member of the Continental Congress, including the committee responsible for encouraging the manufacture of arms to furnish the army. In 1776, still a member of Congress, Paine signed the Declaration of Independence. Paine was also highly instrumental in the drafting of a constitution for Massachusetts, served as speaker of the House in Massachusetts, and as state Attorney General, later attaining the position of Supreme Court justice. 1 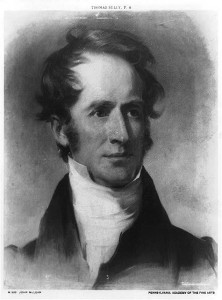 Another birthday on this day in 1785, that of John McLean. McLean was born in New Jersey, moving with his family to Virginia, Kentucky, and finally settling in Ohio. McLean worked the family farm until the age of 16 when he first began his formal education. He went on to study law and was admitted to the bar in 1807. McLean practiced law for several years before he became involved in politics. He served as the examiner of the U.S. Congressional Land Office in Cincinnati, was elected to the Ohio legislature and then to the Supreme Court of Ohio where he served for eight years. For his support of Monroe’s run for the presidency, McLaren earned the position of postmaster general in Monroe’s cabinet, continuing to serve under John Quincy Adams as well. In 1829, President Jackson appointed McLean an associate justice of the U.S. Supreme Court. As associate justice, McLean wrote 160 majority opinions and 30 dissents, one of the few justices to publish his circuit opinions, many of which were antislavery. McLean dissented in the famous Dred Scott case, holding that slavery originated in the use of force and not right. On numerous occasions, McLean was considered as a presidential candidate. 2