On this day in 1686, the City of Albany, New York was granted a municipal charter. It was known as the Dongan Charter after Thomas Dongan, the lieutenant and governor of the province of New York. The Dongan Charter was nearly identical to that given to New York City three months earlier. The Albany charter resulted from negotiations between Robert Livingston and Pieter Schulyer and royal officials. Up until 1785, Albany and New York City were the only cities in New York, with Hudson and Schenectady chartered in 1785 and 1798 respectively. 1 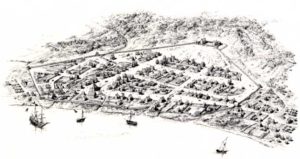 One notable birthday on this day in 1730, that of Daniel Carroll. Daniel Carroll was a politician and cousin to Charles Carroll of Carrollton. Carroll was always an ally of George Washington and thought government should be accountable to the people. Carroll was a supporter of the American Revolution and he signed the Articles of Confederation. He believed that members of Congress should not receive payment for their political office and spoke publicly against those who did receive moneys. He attended the Federal Convention and took an active role, speaking many times and signing the Constitution. Upon his return to Maryland, he supported ratification of the Constitution and wrote publicly of his support. Carroll also served as one of the three commissioners appointed to survey Washington, D.C. and was to serve as a commissioner to the city, although poor health forced him to retire. 2

Another birthday on this day in 1763, that of James Geddes. Geddes was born in Pennsylvania and later moved to Kentucky and then to New York. He ran a salt-manufacturing business and was accepted by the local native tribes. He also served as a judge in a common pleas court in New York and in the state legislature. Geddes was a self-trained engineer and surveyor. He helped with construction of the Erie Canal and was later hired by the Ohio Canal Commission to survey potential canal routes in that state. He then worked in Pennsylvania designing that state’s canal system. 3 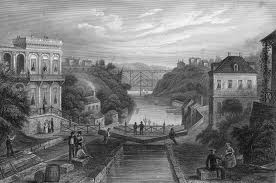