On this day in 1850, Nathan K. Hall took office as the 17th Postmaster General, under President Millard Fillmore. He held the office for two years and then became a judge in the U.S. District Court for the Northern District of New York, where he stayed for the remaining 24 years of his life. 1

In 1715 on this day, the General Court of Massachusetts passed the Boston Light Bill. Two years earlier, John George, a Boston businessman proposed the erecting of a lighthouse at the entrance to Boston Harbor. A committee was formed which surveyed the best location for a lighthouse. The best site was chosen, “the Southernmost Part of the Great Brewster called Beacon Island.” The lighthouse was financed by a one-penny tax on all vessels entering and leaving the harbor. Small coasting vessels paid only two shillings upon exiting the harbor. Small fishing vessels paid an annual tax of five shillings. 2 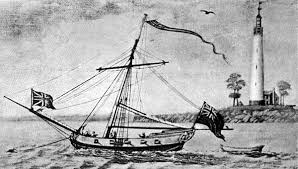 On this day in 1789, Charles Thomson resigned the office of Secretary of Congress in a letter to George Washington. He served from 1774 to 1789, a period of almost 15 years. He states in his letter, “. . . having seen in that eventful period, by the interposition of divine Providence the rights of our country asserted and vindicated, its independence declared, acknowledged and fixed, peace & tranquility restored & in consequence thereof a rapid advance in arts, manufacturing and population, and lastly a government established which gives well grounded hopes of promoting its lasting welfare & securing its freedom and happiness, I now wish to return to private life.” He also offered two recommendations as successors to his office. 3