On this day in 1912, Arizona ratified the 17th Amendment to the U.S. Constitution. The 17th Amendment changed the election of senators as set forth in Article I, Section 3. The amendment made it so that senators would no longer be appointed by state legislatures but rather by popular vote. 1

In 1776 on this day, to protect the middle colonies, Congress resolves to reinforce troops in New York with 13,800 militia and set up a special mobile force of 10,000. Meanwhile at Sullivan’s Island in South Carolina, Colonel William Moultrie informs President Rutledge that a British landing is imminent and vows to “make the best defense I can with what I have got.” 2

On this day in 1800, President John Adams became the first president to live in Washington, D.C. by taking residence at the Union Tavern in Georgetown. The capital was still under construction when Adams arrived

from Philadelphia. The White House had been under construction for nearly eight years and would not be finished for another five months. 3

In 1781 on this day, Jack Jouett, the “Paul Revere of the South,” rode through the backwoods of Virginia to warn Governor Thomas Jefferson and the legislature that 250 British troops were approaching. Cornwallis had sent Banastre Tarleton “Bloody Tarleton” on a mission to capture Jefferson at Monticello and many Virginia legislatures, including Patrick Henry, Richard Henry Lee, Benjamin Harrison, Thomas Nelson, and Daniel Boone. Jouette was at a tavern when he spotted the British soldiers and set off to warn Jefferson and the others. He rode the entire night of 3 June and arrived at dawn to warn Governor Jefferson, continuing onto the Swan Tavern where most of the legislators were staying. 4 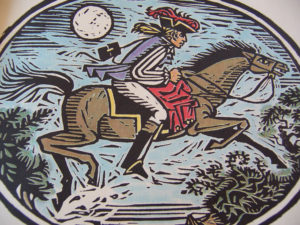