On this day in 1833, the Peterborough Town Library in Peterborough, New Hampshire became the first public library funded with tax moneys. Reverend Abiel Abbott, a Unitarian minister, proposed the creation of the library. At a town meeting on this day, the proposal was made and passed “that a portion of the State Literary Fund be used for the purchase of books to establish a library, free to all the citizens of Peterborough.” 1

In 1971 on this day, Maine ratified the 26th Amendment to the U.S. Constitution, which set the minimum voting age at 18 years old. 2 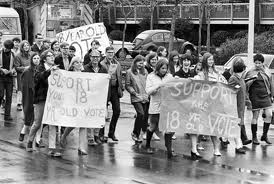