On this day in 1795, James Swan paid off the national debt of the United States, totaling $2,024,899.93. Swan was a Scottish immigrant, took part in the Boston Tea Party, was wounded at Bunker Hill, became a successful businessman, and served as French purchasing agent in the U.S. France had loaned the U.S. money during the Revolutionary War and started demanding repayment, asking James Swan to secure a settlement from the states. Swan personally assumed the debt and sold the debts for a profit in the domestic market. The U.S. no longer owed money to France, although it did owe the money to the private investors to whom Swan sold the debt. 1 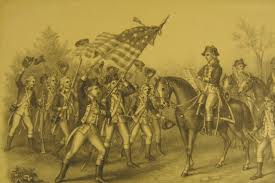 In 1776 on this day, thousands of Continental soldiers gathered in the parade grounds in Lower Manhattan. They had been ordered by General Washington to assemble in order to hear the declaration of American independence recently approved by the Continental Congress. Washington had written a message to be read to the troops before the reading of the Declaration, explaining that Congress had dissolved the connection between the colonies and Great Britain, declaring them independent states. When the citizens nearby heard the Declaration, they toppled a large statue of George III on New York’s Bowling Green, which was later melted down for bullets. 2