Mandeville, LA – Church Doctrine Video – Back in August I commented on the ridiculous court case the Obama InJustice Department is pursuing against Louisiana’s school voucher system. Yesterday federal judge Ivan Lemelle confirmed that the state has to comply with Holder’s information requests before issuing vouchers. This is supposedly necessary because of the 1975 desegregation case Brumfeld v. Dodd but that is just a ruse. As I pointed out back in August and will point out again, Dodd was specifically aimed at insuring that there is equal spending in private schools without regard to race. The LA voucher program is color blind and if it did have a color preference it would be the black children in New Orleans who are its beneficiaries but don’t tell that to New Orleans’ liberals.

The libs basic knock on the voucher program is that it empowers parents to spend education dollars where they think it best and hamstrings the bureaucrat’s efforts to spend the same dollars. And Louisiana should honor its time tested commitment to governments improving their own monopoly: public schools. This attitude of “The State knows best” drives not only public education but public health services and public transportation. In each of these three fields the “public”portion of the endeavor is a miserable failure e.g. thanks to the State and Feds wise and frugal stewardship of our roads and bridges, this state finds itself $12 BILLION in the red on needed road and bridge maintenance.

The Jindal Administration is making some progress in dealing with the red ink bleeding from the charity hospital network but this has come as the State decreases its influence. In September the governor announced several positive developments in its medical services that has even made the State’s cheerleaders like Baton Rouge’s Senator Sharon Weston Broome into believers. Privatizing education with the goal of leaving the endeavor altogether promises the same results.

Why then should the state “honor” the Feds ridiculous demands for “long list[s] of information”?
When this state ratified the Federal Constitution in 1812 and 1865 it granted no such subpoena power to the Feds. If we’re going to survive ObamaCare and Common Core, I suggest we act like it. 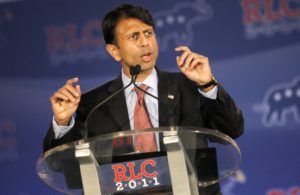