Mandeville, LA – This Clip of The Day was originally aired and published on Jul 3,2012 and is part of the Founders Pass Flashback Collection.

Exclusive Audio and Transcript – The Declaration of Independence declares that the King of Great Britain and the parliament of Great Britain no longer has political authority over the former 13 colonies.  Talk about divvying the property up.  To do that, they had to declare it, make it law, ratify it, which they did by signing it on behalf of their fellow citizens in their colonies, soon to become countries.  This is what they said, “We, therefore, the Representatives of the United States of America, in General Congress, Assembled, appealing to the Supreme Judge of the world for the rectitude of our intentions, do, in the Name, and by Authority of the good People of these Colonies, solemnly publish and declare, That these United Colonies are, and of Right ought to be Free and Independent States . . ..” Check out today’s audio clip and transcript for more…

Mike:  I want to take you to the last paragraph of the Declaration of Independence.  People love to fixate on the first two, as if that means anything.  All this “When in the course of human events, it becomes necessary for one people to dissolve the political bands which have connected them with another, and to assume among the powers of the earth, the separate and equal station to which the Laws of Nature and of Nature’s God entitle them, a decent respect to the opinions of mankind requires that they should declare the causes which impel them to the separation.  We hold these truths to be self-evident . . ..”

Let me inform you of what a man or woman of 1776, of what part of the declaration they would have been interested in, because this is the part that would have legal impact upon them, their lives and their posterity.  It begins here: “Such has been the patient sufferance of these Colonies; and such is now the necessity which constrains them to alter their former Systems of Government.”

I’m going to ask all you Straussians out there, if the people living in the 13 colonies at the time declared their right to life, liberty and the pursuit of happiness, isn’t one of those pursuits of happiness the statement that they are going to alter their former, and they used it in the past tense, Jefferson is using the past tense here, they’re altering their former system of government.  In other words, this is yesterday, now today we get to choose.  Are you really going to go to war over the preposterous, obviously anti-historical point of view that that’s not what is contained in this document, as Jack Hunter likes to call it, my good friend who will be with me today on the video version of today’s Post Show Show?

They’re going to “. . . alter their former Systems of Government.  The history of the present King of Great Britain is a history of repeated injuries and usurpations, all having in direct object the establishment of an absolute Tyranny over these States.  To prove this, let Facts be submitted to a candid world.”  Could we not submit facts to a candid world that the recent history of the federal government has been designed to reduce us to an absolute despotism?  Could we not submit facts to a candid world this is why we’re leaving you, this is why we’re out of here?  We don’t want a war.  We don’t want to fight.  We’re just leaving our former system of government for one that we have here in the State of Texas, State of Louisiana, State of Florida.  This is the instrumental part, my friends, of the Declaration of Independence.  Anyone that tells you anything else is a charlatan hack.

You can go back and read source material, newspaper clippings, letters between the delegates, what was written around the time.  Hell, just read Washington’s correspondence.  You don’t have to go any further than that.  Read the correspondence of George Washington.  If you don’t believe me, don’t read these books that are allegedly written about Washington.  Go to the source.  You can find collections.  Online you can find collections of Washington’s writings.  Go read Jefferson’s collected works.  I think there were 30,000 pages in them.  Dumas Malone is one of the ones that put together one of the wonderful volumes of them.  It can be quite a lifelong project reading Jefferson’s correspondence, though, I warn you.  Read it from 1776 until around ’88.  See if you can find any indication whatsoever of the crap you hear today.  Just search for it and see if you can find it.

They conclude, this is the legal part, the declaration of independence declares that the King of Great Britain and the parliament of Great Britain no longer has political authority over the former 13 colonies.  Talk about divvying the property up.  To do that, they had to declare it, make it law, ratify it, which they did by signing it on behalf of their fellow citizens in their colonies, soon to become countries.  This is what they said, “We, therefore, the Representatives of the United States of America, in General Congress, Assembled, appealing to the Supreme Judge of the world for the rectitude of our intentions, do, in the Name, and by Authority of the good People of these Colonies, solemnly publish and declare, That these United Colonies are, and of Right ought to be Free and Independent States . . ..”

There’s an s at the end of states; that’s plural, meaning they’re states.  There’s no indivisibility there.  There’s no irrevocability there.  There’s none of this garbage that you’ve been fed your entire life.  If you’re a new listener, welcome aboard.  Unplug the matrix cable in the back of your head.  This is the largest dose of founding father red pill you will ever receive, and we dole it out once per year.  Back to the legal part of the Declaration of Independence, which is the only part that matters.

“. . . That these United Colonies are, and of Right ought to be Free and Independent States; that they are Absolved from all Allegiance to the British Crown, and that all political connection between them and the State of Great Britain, is and ought to be totally dissolved . . .”  So it is and ought to be dissolved.  What are they telling the world?  What are they doing?  Who is this little nitwit that’s nitpicking at my heels on Twitter?  What’s he doing, Nick?  What is Jefferson writing here?

Then they make their intentions known to the world and what they intend to do with their new independence.  “. . . they have full Power to levy War, conclude Peace, [Mike: If you’re going to levy war, you have to be able to get out of it.], contract Alliances [Mike: Free trade there.], establish Commerce [Mike: More free trade.], and to do all other Acts and Things which Independent States may of right do.  [Mike: Again, there’s that nagging capital I, capital S, Independent States, plural.]  And for the support of this Declaration, with a firm reliance on the protection of divine Providence, we mutually pledge to each other our Lives, our Fortunes and our sacred Honor.”

Delaware: the great Caesar Rodney, George Read, Thomas McKean.  New York: William Floyd, Philip Livingston, Francis Lewis, Lewis Morris.  New Jersey: Richard Stockton, John Witherspoon.  How do you like that, they actually had a reverend there, the Reverend Witherspoon, who also happened to be the Dean of Princeton University.  Francis Hopkinson, John Hart, Abraham Clark, who was captured by the British, by the way, and when his sons found he, he begged them to not tell Hancock so they wouldn’t try to rescue him.  Put that in your pipe and smoke it.  You looking for a hero today?  Look up the story of Abraham Clark and the Clark family of New Jersey.

New Hampshire: Josiah Bartlett, William Whipple, Matthew Thornton.  Rhode Island: Stephen Hopkins, William Ellery.  Connecticut: the great Roger Sherman.  Sherman has the distinction of being, I believe, the only man that signed the Declaration of Independence, the Articles of Association, the Articles of Confederation and the Constitution.  His great grandson, George Frisbie Hoar, a great senator from the State of Massachusetts, gave, in my humble opinion, the greatest speech ever given on the floor of the United States Senate, begging not to go to war with the Philippines.  It’s on my website.  It’s called “Subjugation of the Philippines.”  Go read it someday.  Continuing on, Connecticut: Samuel Huntington, William Williams and Oliver Wolcott.  There’s your 56 men who pledged their lives, their fortunes and their sacred honors so we could squander it, have ObamaCare, and have people tell us we’re not free to choose our form of government today in 2012.  Thank you very much. 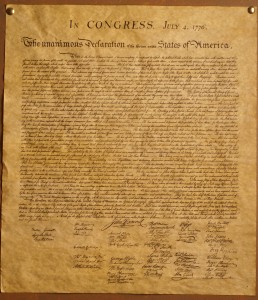 Not a day goes by without taking my red pill dose, sir. I have spent the last two hours discussing this article w/ my 16 & 15 year old. They can’t believe what they have been missing out on through public education.

I thank you King Dude for your passion, hobby, and life long pursuit of educating us sheeple! By the by… I will pay for my XM subscription and King Dude back stage pass before I pay my Obama Care bill!

Mike, again my friend, thank you! Happy “S” day to you and yours!