Militia Members Were Not Knuckle-dragging Neanderthals

Mandeville, LA – Exclusive Transcript – “All one would need to do is to grab a history book from your state.  If you live in one of the original 13 colonies, grab a history book and find out what troops or what organizations of troops were sent to join the Continental Army.  This is why I just played the clip from Times That Try Men’s Souls for you.  Who defended that hill next to the Purdy house at Chatterton’s Hill?  Smallwoods Marylanders.”  Check out today’s transcript for the rest…

Mike:  The Spirit of ’76 – The Story Continues tells the story of the Second Amendment.  You could say it tells the story of the Bill of Rights, but mainly of the Second Amendment and the purpose and reason behind it, why it was proposed, who proposed it, when it was proposed in Congress, who proposed it in Congress, how it was altered in Congress, and when it went to be ratified by the states as part of the Bill of Rights, what was said about it and when it was ratified.  The story continues is a single CD, ten bucks in the Founders Tradin’ Post, or get the download edition and listen to it this morning.  It explains all of this in the words of the founders and the framers themselves.  It’s dramatized because I and my daughter Maddie narrate the story.

The thing you’ll find if you study this or if you listen to my version of the story or do your own research and find out the genesis of the Second Amendment, it was because there were a couple of clauses that came up over and over again in ratification debates.  It wasn’t just in Virginia.  They kept coming up in Virginia, North Carolina.  It’s one of the reasons the North Carolinians refused to ratify the first time around.  They went: You didn’t define the whole supervision of the militia clause.  It was a huge issue.  Now, ask the question: Why was it a huge issue?  Why was this the biggest sticking point?  Why were they so concerned over it?  Today you say the word militia and people run for closets to go hide in, or you say the word militia and you get the last caller that I just had, [mocking] “Them people at gun shows buying guns, there’s militia everywhere.”  That is not militia, Sir.  So what did they mean by that?

All one would need to do is to grab a history book from your state.  If you live in one of the original 13 colonies, grab a history book and find out what troops or what organizations of troops were sent to join the Continental Army.  This is why I just played the clip from Times That Try Men’s Souls for you.  Who defended that hill next to the Purdy house at Chatterton’s Hill?  Smallwoods Marylanders.  You people in Maryland — Eric, you’re from Maryland.  Who in the hell were Smallwoods Marylanders?  A militia group.  They had wives that were very talented and gifted with the spindle and seamstresses and what have you.  If you look up the Smallwoods Marylanders and some of the other militias that were sent from Maryland, you’ll find some very colorful, nice uniforms that they were in.  How was Smallwood able to defend Chatterton’s Hill?  There was another militia group that was mentioned in there.  Why would Washington have had confidence in them? 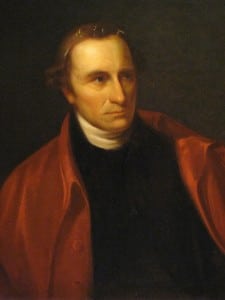 Number one, he knew that they had volunteered for the right reasons, and that was to protect their homes, homeland, patriam.  It’s where the term “patriot” comes from.  What were they protecting them from?  The invasion of the British Army and 10,000 Hessian mercenaries.  Why were the British Army and the Hessian mercenaries there?  Because the king wanted his colonies back.  They were a great source of revenue, a great source of pride, a great source of natural resources, and a gateway into the west of the North American continent.  Of course he didn’t want to give them up.  He was willing to send his army over there in the form of navy, commanded by Admiral Richard Howe and on land commanded by General William Howe, the Howe brothers.

The redcoats, as they were called, their distinction was that they were drilled, professional, and they had a rule and code they lived by.  That’s what distinguished them from Smallwoods Regulars, for example.  You people from Vermont, the Green Mountain Boys, and there were militias from New Hampshire.  There were militias from Delaware.  Caesar Rodney led a militia.  There were militias everywhere.  What did they do?  When they were called upon, the reverted to and then relied upon the drills and the plans of action that they had practiced and they were required to practice in their own hometown.  If you get my book Patrick Henry – American Statesman — the book has been out for less than a year now and it’s already been forgotten by many.  Why?  It’s a phenomenal book, especially the tale that it tells of Henry and all those great Virginians in the buildup to war and then the actual war.  Read the chapter about the rape of the gunpowder.  Any of you out there listening that have the book, you know what I’m talking about.  What did Patrick Henry lead on the march to Williamsburg — of course, he was criticized for it, but I still think he was right.  Whom did he lead to try to get the gunpowder stores away from Lord Dunmore so Dunmore couldn’t give them to the redcoats to shoot Virginians?  He led a militia.  What was Henry?  Henry was a lieutenant in a what?  In a militia.

The modern connotation of militia as a ragtag bunch of mercenaries is offensive, scurrilous, scandalous is the proper word, and it ought not be used.  Please don’t call me and infer that people that gather at gun shows, just because they’re there buying guns, are members of a militia.  Now, they could be, but their presence at a gun show does not a militia member make.  Those men that joined militias joined them because there was an existential threat to their wives, to their children, to their property, to their livestock.  If you lost, in a militia altercation, for example — let’s just say you did.

my dramatization of Washington’s Crossing, Times That Try Men’s Souls?  He led or formed a militia around Trenton, New Jersey.  Why?  Because the Hessians were doing what?

If the farms weren’t defended, what would the Hessians and redcoats do?  They would go and pillage.  They’d confiscate the stores.  If there was wheat, if there was corn, they’d take it.  If there were animals, livestock, they’d take them and butcher them and eat them.  Many times they’d burn the house down behind them.  So Philemon Dickinson did what? Organized a militia.  For what?  Defense of home, homeland, to become a patriot.  So this was a civic duty that was executed, in other words.

Thank you. I really appreciate this website and your morning show in Sirius now that my new car has a free three-month trial of internet radio. I had not heard of you.

I’m on the intellectual front line – a high school social studies (used to call it History) teacher in New Jersey. Common core, liberalizing mandates by the State and the general de-construction of our traditional Western values, and the corporate takeover is being pushed harder than ever. As you well know, it is a battle being fought for the minds of our future generations. In fact, if my administration, pushers of this State reform, the “willing accomplices) even recognized who was writing this, voicing their contrary opinion, I’d be fired.

Mike, all we can do is fight the good fight and try and ban together in a final stand – win or lose. Two quotes from two related films despite the fact that many may perceive them as defeatist, I see them as a hopeful chance to wake up all REAL Westerners:

(From Lord of the Rings – The Two Towers)
Theoden: Where is the horse and the rider? Where is the horn that was blowing? They have passed like rain on the mountain, like wind in the meadow. The days have gone down in the West behind the hills into shadow. How did it come to this?

(From Lord of the Rings – The Return of the King)
Gamling: Too few have come. We cannot defeat the armies of Mordor.
Theoden: No. We cannot. But we will meet them in battle nonetheless.