Mandeville, LA – Exclusive Transcript – Do you see any Martin Luther King — of course, you don’t see any George Washingtons around either — do you see anyone following in the tradition of a gentleman that spoke as King did?  I know he didn’t always live up to the high ideals, but he was human.  That’s part of the human condition.  Do you see anyone out there amongst the young that you would say would be a young Martin Luther King, Jr. in waiting?  I don’t. Check out today’s transcript for the rest…

Mike:  It is titled “Eulogy for the Martyred Children,” 18 September 1963.  AG, I asked you earlier if you’d ever heard that speech and you said you had not.  Now that you’ve heard it, what did you think?

AG:  It’s impressive.  The strength to not be angry at what took place in the killings is really impressive.

AG:  I’m trying to think if there’s anyone that would have the same kind of message.  The point that you made that someone like Jesse Jackson uses or at least a lot of his methods involve the government in some aspect, which negates any of the civil rights leaders that are out there right now.  A lot of them seek the solutions to the problems they’re addressing through government action.  Hard to see someone echo the same sentiments that Martin Luther King did.  That’s not to say that he didn’t argue for a lot of the government ending inequality and education and things like that, because he did, but it wasn’t always the central focus of his speeches.

Mike:  I’ve gotten into discussions with people before, [mocking] “What’s your problem with the Civil Rights Act of 1964?”  Of course, this is the thing they try to hang out here to get people like me, like Rachel Maddow tried to get Rand Paul to bite on it, to jump on it so they can point out you’re some sort of a racist, hick, hayseed bigot and your career and your public life must end because you have crossed the line.  I didn’t hear anything of the sort in the words of the Reverend Martin Luther King, Jr.  I heard the exact opposite.  It was ecclesiastical.  He was almost quoting Jesus to turn the other cheek.

AG:  In his “I Have A Dream” speech, he did go after interposition and nullification when citing Alabama.

Mike:  I didn’t say I agreed with King on everything.  When it came to the Civil Rights Act of 1964 — I don’t want to dredge this up.  That particular act, it’s not going to serve any purpose today to discuss it other than to say that it is an example that there were laws, segregation laws that were actually on the books, segregation laws meaning there were governments, whether they were local or state, that had laws on their books that segregated the races.

If you believe that men are able to form their own free associations, and that through free association, whether in our communities or politics, that’s how and why we’re free.  If you believe that, then any laws that segregate people — I’m not talking about marriages and what have you.  I’m talking about just segregation by particular designation, in this instance race.  Certainly that’s not free association. You would be prohibited by law to freely associate.  Those laws ultimately needed to be struck down.  Again, they needed to be struck down by the force and will of good people who wanted them to end.

That’s the proper way to end those things.  When you force the ending on as the Rights Act forced the ending on those things, you ultimately create enemies and resentment because it didn’t come from the tender sensibilities of the people.  That may have been some of the tender sensibilities but they were prohibited or forbidden from exercise.  I just wonder where the humility of the leaders are today that is exhibited in that speech from Martin Luther King, Jr. that I just read. 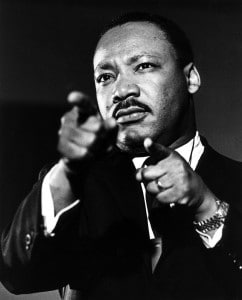 Humility is honorable and not often heard or seen in current society. Selfish is popular now, and I believe humility and selfishness mix like oil and water.