Mandeville, LA – Exclusive Transcript – A state is nothing more than the official arm of operation for the people of any sovereign territory.  That’s all a state is.  People think: We ought to do all these things in our states.  What do you mean by states?  Few people ever bother to define it.  The state, I would define as having a sovereign border, sovereign territory, sovereign people that are citizens, and they have the will to enact and the power to enforce law.  Simply defined, that’s what a state is.  It’s people acting in their political capacity.  That does not mean that a state is not also and cannot also be a composition of people that are not political animals.  Check out today’s transcript for the rest…

Mike:  Our Project ’76 webisodes — this one is not a webisode yet but it will be.  It’s under the headline “Jimmy Madison Didn’t Do Congressional Charity Work.”  Kevin Gutzman sent this to me, Dunlap and Claypoole’s American Daily Advertiser of January 14, 1794.  It is a discussion between Madison — this is in Congress — and a congressman Smith “On the Memorial of the Relief Committee of Baltimore.”  I thought you would find this interesting, Andrew.  This was a committee that was formed in the City of Baltimore for the St. Domingo refugees.  There were seven points that Madison made.  What apparently Congressman Smith wanted to do was an appropriation.  He wanted to fund relief efforts for these refugees.  James Madison said: Excuse me?  Under what authority do you find that in our Constitution?  Then he gave a stirring address that was recorded in the Congressional Globe and then printed in the Daily Advertiser of Dunlap and Claypoole’s.

“It is hardly possible to do justice to the affecting narrative of Mr. Smith—suffice to say, that a greater scene of misery and distress was hardly ever before witnessed, nor a more noble and prompt display of the finest feelings of the human heart exhibited than in the relief afforded by the citizens of Baltimore.” James Madison opposes this as not within constitutional purview:

“Mr. Madison remarked that he presumed no arguments, no efforts of oratory were necessary to excite emotions of benevolence in the mind of any member the house towards those unfortunate fugitives [from Saint-Domingue].  He had no doubt that the feelings of every man were alive to a sympathy for their situation, but he remarked that the government, confined to specified objects—it is not like the state governments whose powers are more general.  Charity is no part of the legislative duty of the government; it would puzzle him to lay his finger on any part of the constitution which would authorize the government to interpose in this business; the report of the committee he observed involved this constitutional question.”

Mike:  So Madison said: Hey, man, I’m not saying your cause isn’t great, Congressman Smith, and that everyone is not sympathetic to the plight of the St. Domingo refugees and those that are starving.  All I’m telling you is that in our Constitution, there is no general grant of power to deal with charity.  Where should that lead you to?  That should lead you to the next conclusion or the next part of this.  If it could not lead to the charitable duty of the government for the refugees from St. Domingo, why would the same government then have the power to perform charitable duties for the citizens of Baltimore?  As Madison’s dialogue on this points out, the citizens of Baltimore were perfectly free and the government of Maryland was perfectly free to do either of these things.  Their legislative power, if they wanted to tax themselves or raise revenue to do this, was general, meaning that it didn’t have limitations other than the ones that they agreed to when they ratified the Constitution.  This is key to remember.

A state is nothing more than the official arm of operation for the people of any sovereign territory.  That’s all a state is.  People think: We ought to do all these things in our states.  What do you mean by states?  Few people ever bother to define it.  The state, I would define as having a sovereign border, sovereign territory, sovereign people that are citizens, and they have the will to enact and the power to enforce law.  Simply defined, that’s what a state is.  It’s people acting in their political capacity.  That does not mean that a state is not also and cannot also be a composition of people that are not political animals.  As we know, many people (too many) are not these days.

Since the grant of power to the Constitution is specific, and only specific powers may be used, then those that are not authorized can only then be called upon or could be called upon and maybe should be called upon by the people of any of the states that ratified or a member of the Union.  As I discussed earlier, the same would apply to the NSA and the CIA and all the other standing army intelligence operations that our foreign policy necessitates.  It’s intriguing to me as well that this is a foreign entanglement.  We are talking about refugees from St. Domingo.  Madison is pointing out: No, there’s no power, no grant, and you can’t do this.

In saying that — this is where it gets really, really inspirationally intriguing.  In saying that, Madison is also saying that the citizens of Maryland did not grant all of their foreign policy or foreign dealings to the general government as well.  Today we perceive it that Congress does it all or the president does foreign policy, all of it.  That is not the historical case, and that is not how it was practiced when men that were founders were still alive and could say: No, dude, that’s not what we intended.

Just like the Alien and Sedition Acts, the reason Jefferson and company were raising such a stink about the alien part was that it was their opinion that they had not granted to Congress any power to tell the citizens of Virginia who they could admit into their state as alien friends.  Alien enemies, certainly.  If you’re at war with another country and the federal government has declared such a war, then Congress does have authority.  It cannot tell you who alien friends are.  Keep that in mind when you discuss, because the immigration issue is about ready to rear and scream in here very soon. 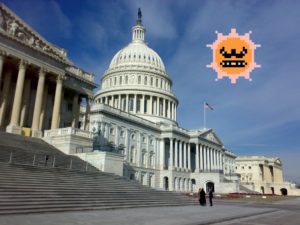 0Shares
alien and seditionBaltimorecharityciaCongressConstitutionforeign policyimmigrationintelligenceJames MadisonjeffersonnsaProject '76sovereigntystate governmentstate sovereignty
Previous PostBook of NSA 2:19 – Thus Sayeth the Sheeple “If You Don’t Have Anything to Hide, What Are You So Worried About?” and They Were HappyNext PostNSA Surveillance Was Approved By Congress To Fight The Enemy . . . The American People