Mandeville, LA – Exclusive Transcript – Can you imagine the rest of your natural-born life, if you’re in your 30s or 40s, that for the next 40 or 50 years you will witness sexual perversions and depredations that you cannot imagine today that will be argued are perfectly as normal as Mr. Smith down the street shacking up with the four Mrs. Smiths and the three Mrs. Smith children all in a wonderful monogamous, polyamorous relationship?  Do you think that’s farfetched?  You haven’t been paying attention. Check out today’s transcript for the rest…

Whilst the Bill does change the meaning of marriage and terms such as ‘widow’ in some contexts present and historic, and all future contexts, it does not change all historic understandings. Take for example the hypothetical Will by Great Uncle Bob who dies. He leaves his entire wealth to you, provided that you are married. That use of the word only applies to a ‘heterosexual’ understanding of marriage.

The broader conversation beyond these regulatory specifics is upon the idea of ‘an end of journey’. Stonewall emailed supporters on the morning the Bill was published, describing it as ‘a modest measure which will complete the legislative jigsaw for gay people’. So, that’s it folks. Mission accomplished.

Of course, there are other battles to be fought – homophobic bullying in schools for instance, which Stonewall has been commendably active with [Mike: They’re talking about the British version of these things. The two are linked.] – but the leading gay rights campaigning group of England and Wales has declared the legislative fight over with. Yet, I can’t help feeling it has eerie echoes of George W Bush and that famous arrival on an aircraft carrier in 2003…[Mike: In other words, mission is not accomplished.]

What then does this apparent victory look like? It looks like being ‘normal’, being the ‘same’ as the dominant heterosexual majority, or at least, a fantasy image of that majority. We will aspire to a monogamous, state-sanctioned relationship. We’ll aspire to have children, raising them and lead a productive civilised existence. Rip up the Chariots membership card, stop those group-sex shenanigans and embrace normality.

Legislative victory should not mean identity erasure. There remain numerous sexual freedoms to campaign on – yes sexual – that’s what gay rights is about, not merely a civil rights campaign – and there are battles still to be won. Battles relating to pornography, the continued criminalisation of consensual sexual acts, re-constructing our ideas of relationships in relation to sex, monogamy and the illusion that only ‘couples’ might want to enter into a state-sanctioned partnership, are just a handful which spring to mind.

The marriage Bill should be welcomed, but it is not the end of the journey, or the final piece in a jigsaw. It is just another step – albeit a significant one- on a never-ending journey.

Mike:  So the journey never ends.  You just keep inventing new perversions of sexual relationships that must then be consecrated under the banner marriage.  Remember last May, Jeffrey Lord at the American Spectator had written a piece about how the Democrat Party should have withdrawn its conference from Charlotte.  The reason it should have is because the State of North Carolina had just voted against homosexual marriage.  Lord was positing that this is just the beginning.  Once they get ginned up for homosexual marriage, what comes next?  There are other sexual weirdnesses and perversions out there and of course they will make their way into the public, and of course we’ll hear, [mocking] “What’s so abnormal about polyamory?”  Lord went on to explain that there are polyamory people out there right now just clamoring for the SSM crowd to win the day so we can begin the journey to legalizing polyamory.

What is polyamory?  You people that think this is just kneejerk and reactionary, you haven’t been following late world history.  Polyamory is this idea that you should not be limited to just one partner.  If you’re a female and you want four husbands or if you’re a man and you want group wives, you should be able to have that.  Not only that, you should be able to make a church marry you.  You should have the same ability and the same rights in polyamory that you have with homosexual marriage.

If you think this all ends with civil unions that some states are granting, and probably ultimately the Supreme Court forcing clergy to perform these procedures that they religiously disagree with and many will refuse.  We don’t know what the gays and the civil rights lobby will then demand we do with those preachers who refuse to violate their religious consciousness.  Are you going to put concentration camps up?  Are we going to retrain those people to think properly?  [mocking] “Why are you harboring those thoughts about homosexuals?  You need to get over that.” — “My religion says I…” — “I don’t want to hear about your religion.  Get out there and perform that service.” — “What if I don’t want to?” — “We’ve got a concentration camp.  We’re going to reeducate you, buddy.”

When you see it laid bare, and for those that maybe believe that someday there is a truce to be had between the secularists, which is what progressives are, and the goals that they seek, ladies and gentlemen — like I played the clip from “Cyborg” earlier, what they seek ultimately is the destruction of man.  They may not know it, but that’s what they see.  There is, again, no higher authority.  There is nothing that can come between them and what they desire and what they want the law to reflect.  It doesn’t matter what that is.  As Mr. Ashford alerts us to, the journey has just begun and there are many battles yet to be waged.

Can you imagine the rest of your natural-born life, if you’re in your 30s or 40s, that for the next 40 or 50 years you will witness sexual perversions and depredations that you cannot imagine today that will be argued are perfectly as normal as Mr. Smith down the street shacking up with the four Mrs. Smiths and the three Mrs. Smith children all in a wonderful monogamous, polyamorous relationship?  Do you think that’s farfetched?  You haven’t been paying attention. 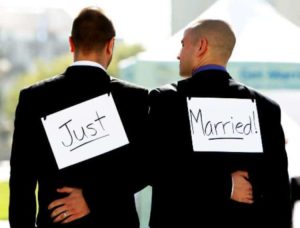