Mandeville, LA – Exclusive Transcript – Ladies and gentlemen, just imagine this.  Just wrap your heads around this for a moment.  The senior senator from South Carolina is saying that the person who gets to determine who an enemy combatant is is the President of the United States, the Commander in Chief.  His decision is final and his decision also on what kind of force to use is final.  Do you really want to confer that kind of power into one man?  Check out today’s transcript for the rest…

Mike:  Dr. Drone testifying yesterday, we played the clip earlier.  I now have this, John Brennan, Obama’s nominee to be CIA Director, or the Assassinator in Chief.  He kind of is the Terminator.  He doesn’t have the accent.  We have this now from Politico, “Graham defends Obama on drones.”  I told you they’d all be in cahoots on this, that they’d all get together and go: What’s the big deal?  Why are you so hung up against the drones?  Again, it’s the drone warfare that is at issue here.

We’ve talked about this ad nauseam over the last year or so, about the dangers of fighting video game warfare and what that does to your fighting force and how it is that the fighting force executes the job.  It doesn’t actually have to materially or physically participate in the horrors of war, in the horrors of killing.  You just get an unmanned aerial vehicle to do it.  Therefore you don’t have to smell the gunpowder.  You don’t have to feel the weight of the gun in your hand.  You don’t have to hear the cries of the dead or wounded.  It’s all nice, clean and sterile, just like Call of Duty, a dangerous precedent to remove humanity from what ultimately takes human life and destroys property.

Sometimes I wonder and think that men like James Cameron are inspired, or they’re future travelers.  The Terminator and the whole storyline of The Terminator just follows the course we’re on, and he wrote this thing back in 1982.  Ray Bradbury had that gift, as did Isaac Asimov, as did Gene Rodenberry.  Most of the things that are fantastical on Star Trek have now all transpired, save for the warp drive and being able to beam people from one place to another.

Senator Lindsey Graham will offer a resolution next week commending President Barack Obama’s use of drones and the killing of Anwar al-Awlaki.

“Every member of Congress needs to get on board,” Graham said. “It’s not fair to the president to let him, leave him out there alone quite frankly. He’s getting hit from libertarians and the left.”

Mike:  Isn’t that great?  Now if you’re for due process, if you’re for civil liberties, now you’re aligned with progressive libs.  That’s great, Lindsey.  You wonder why it’s difficult for me to call myself a conservative any longer.  As a matter of fact, there’s a post in today’s Pile of Prep alluding to that: Here’s reason #4,328 why I am not using the term conservative any longer.  I’m using the term [r]epublican.  Live it, love it, know it.  Get the baseball cap.  Get the coffee mug.  Get the t-shirt.  Get the bumper sticker.  Become a [r]epublican.  You’re basically taking traditionalism back from those that have hijacked it and are perverting it today by becoming a [r]epublican.

“I think the middle of America understands why you would want a drone program to go after a person like Anwar al-Awlaki,” Graham added.

The newest discussions about drones and al-Awlaki comes after the White House sent a memo to members of Congress explaining the reasoning behind their killing of an American citizen who was working for Al Qaeda. [Mike: See my discussion last hour on the reason why there is a treason clause in the Constitution.]

“The process of being targeted I think is legal, quite frankly laborious and should reside in the commander in chief to determine who an enemy combatant is and what kind of force to use.”

Mike:  Ladies and gentlemen, just imagine this.  Just wrap your heads around this for a moment.  The senior senator from South Carolina is saying that the person who gets to determine who an enemy combatant is is the President of the United States, the Commander in Chief.  His decision is final and his decision also on what kind of force to use is final.  Do you really want to confer that kind of power into one man?  You better have a cadre of George Washingtons ready to serve.  Men being deceitful, men being not virtuous, men being designing, men being ambitious, men believing they are superior to the transcendent, men not being humble, this is a recipe for abject disaster.  You have a Republican, an alleged conservative, advocating it.  Not only is he advocating it, he’s promoting it.  I don’t think Lindsey Graham has ever read the Constitution.  If he has, I would then venture that he hasn’t read it well and he hasn’t read any of the supporting documents, as they say in the legal trade.  Graham concludes:

“If this ever goes to court I guarantee you it will be a slam dunk support of what the administration is doing. I think one of the highlights of President Obama’s first term and the beginning of his second term is the way he’s been able to use drones against terrorists.”

Mike:  You know how libs see racists behind every tree and every microphone?  Lindsey Graham and John McCain and their ilk see terrorists everywhere.  Folks, they are everywhere.  Not only are they everywhere, but every solitary second of every solitary day, they are plotting to take out the Golden Gate Bridge.  They are plotting to take out a Wal-Mart, of course with no provocation whatsoever.  No one has provoked them.  They just woke up one morning and said, [mocking] “What shall I do in honor of my Muslimanity?  I know, there’s Americans in a Wal-Mart.  I will take them out.  Allah Akbar!”  No thought process, no justification, nothing. They’re just a bunch of mindless human scum and vermin and that’s what they exist to do.  They have never been provoked.  They have no reasoning for this whatsoever.  It’s nice to just frame them as terrorists.  I’m not excusing terrorism.  I know some of you are going to say, [mocking] “What, are you a fan of terrorism?”  No, not in the least.  How many of you have seen Clint Eastwood’s movie, was it Flags of Our Fathers or Iwo Jima?  AG, did you see either one of those?

AG:  I did not catch either one of those.

Mike:  They’re two similar movies.  Flags of Our Fathers is a story —

AG:  Aren’t they like the same movie, different sides?

Mike:  Yes.  Of course, Clint was widely criticized by the Lindsey Grahams, [mocking] “I can’t believe he made a movie showing what the Japs were thinking.  Who cares about the Japs?  They’s enemies.”  Of course, again, we didn’t do anything to provoke Japan from maybe wanting to wage war on us for survival, nothing of the sort.  So Eastwood makes one movie, Flags of Our Fathers.  This is the story of the guys that hoisted the flag up on Mount Suribachi, the famous photograph of the marines planting the flag into the ground at Iwo Jima, the story of them going on USO tours to raise bond money, and how what they did that day was not what was promoted.  If you’ve seen the movie, I don’t need to describe it to you.  It’s the taking or the conquest of the island of Iwo Jima from the American perspective and how it was used as propaganda to promote the war effort.  In that instance, propaganda was justified because you needed to promote the war effort.  We had to raise money.  It was understandable.

The other movie, which I think was just called Iwo Jima, shows the same events but from the perspective of the Japanese.  I can’t remember what the star of that movie’s name was, but he was writing letters the whole time.  He kept writing letters back to his wife.  At the end of the film, what the Americans find in the cave are the letters.  It just showed that the Japanese were as patriotic to the emperor as the Americans were to the commander in chief.  Of course, we’re not supposed to hold this view in our heads at the same time.  As Bush said, if you’re not with us, you’re against us, meaning there is only America.  We’re the only ones that can be patriotic and valorous in the battlefield.  That’s not how war and men who fought wars were thought about until Lincoln, Sherman and Grant invented total war theater.  There’s a book out there about that but its name escapes me.

So Lindsey Graham is basically saying that it is okay for the American president to become the American king and to use the army as he sees fit, regardless of what Congress or the people have to say about it because he’s doing it on behalf of the people.  Due process and the Constitution be damned, and that includes the declaration of wars.  We actually could have congressional sessions where the president could actually meet with members of Congress and tell them: We’ve identified these particular cells and suspects in lands that we do not currently occupy and we really can’t go in to take these guys out because they are sovereign countries.  What do you advise me to do?  Of course we advise ourselves, [mocking] “Screw it.  What’s a border in a country in Africa?  They don’t have borders over there.  If they do, who cares?  We’re America.  We can storm over those borders.  What do you think they’re doing there, Barack?” — “I don’t know but satellite drone intelligence says they ain’t playing checkers, I know that.”

I always use the example of what happens if you were having lemonade with the Kennedys at Hyannis Port right off the coast of Martha’s Vineyard in Massachusetts and the Chinese decide they’ll fly an unmanned aerial drone over Hyannis Port.  What fit he Chinese determine: I think that’s the guy that’s trying to undermine our patents in the international community.  Why don’t we take him out?  What if the Chinese invaded Massachusetts airspace and dropped a bomb to take out the patent infringer dude?  They would say: No, he is an enemy combatant to the economy and to the people of China.  What would we say about that?  We would say it’s an act of war.  We would retaliate.  We would say: How dare you enter our airspace?  We don’t let anyone enter our airspace.  With carte blanche, we have the arrogance to believe that we can enter anyone else’s airspace.

Just stop the damage.  We’re going to have to live with what you’ve already done, but stop creating new enemies.  Stop the transgressions.  Stop the trespassing.  Bring the troops home.  Mind our own business.  Explore for our own resources here.  Maintain a fleet and force necessary to defend San Francisco and Norfolk, Virginia, fine.  Of course, that’s not very popular these days, is it? 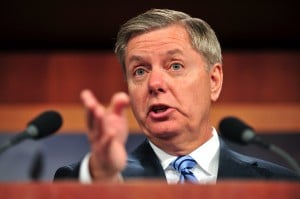