Mandeville, LA – Exclusive Transcript – If you’re to denounce your theological heritage, what are you to replace it with, what the cool kids with the pumped-up kicks say is theological heritage today?  Is it theological at all?  Most of them probably think we need no theology.  “What’s God?  What do we need that for?  I can’t like God on Facebook.  I can’t follow Jesus on Twitter.  What do I need him for?  Check out today’s transcript for the rest…

Mike:  Mark Steyn has an interesting take on this, “The Death of the Family” in his column over the weekend.

Gay marriage? It came up at dinner Down Under this time last year, and the prominent Aussie politician on my right said matter-of-factly, “It’s not about expanding marriage, it’s about destroying marriage.”

That would be the most obvious explanation as to why the same societal groups who assured us in the Seventies that marriage was either (a) a “meaningless piece of paper” or (b) institutionalized rape are now insisting it’s a universal human right. They’ve figured out what, say, terrorist-turned-educator Bill Ayers did — that, when it comes to destroying core civilizational institutions, trying to blow them up is less effective than hollowing them out from within.

On the other hand, there are those who argue it’s a victory for the powerful undertow of bourgeois values over the surface ripples of sexual transgressiveness: Gays will now be as drearily suburban as the rest of us. A couple of years back, I saw a picture in the paper of two chubby old queens tying the knot at City Hall in Vancouver, and the thought occurred that Western liberalism had finally succeeded in boring all the fun out of homosexuality.

Which of these alternative scenarios — the demolition of marriage or the taming of the gay — will come to pass? Most likely, both. In the upper echelons of society, our elites practice what they don’t preach. Scrupulously nonjudgmental about everything except traditional Christian morality, they nevertheless lead lives in which, as Charles Murray documents in his book Coming Apart, marriage is still expected to be a lifelong commitment. It is easy to see moneyed gay newlyweds moving into such enclaves, and making a go of it. As the Most Reverend Justin Welby, the new Archbishop of Canterbury and head of the worldwide Anglican Communion, said just before his enthronement the other day, “You see gay relationships that are just stunning in the quality of the relationship.” “Stunning”: What a fabulous endorsement! But, amongst the type of gay couple that gets to dine with the Archbishop of Canterbury, he’s probably right.

Modern Family works well on TV, less so in the rusting double-wides of decrepit mill towns where, very quickly, the accumulated social capital of two centuries is drained, and too much is too wrecked. In Europe, where dependency, decadence, and demographic decline are extinguishing some of the oldest nations on earth, a successor population is already in place in the restive Muslim housing projects. With their vibrant multicultural attitudes to feminism and homosexuality, there might even be a great sitcom in it: Pre-Modern Family — and, ultimately, post-Modern.

“Fiscal conservatives” recoil from this kind of talk like homophobes at a bathhouse: The sooner some judge somewhere takes gay marriage off the table the sooner the right can go back to talking about debt and Obamacare without being dismissed as uptight theocratic bigots. But it doesn’t work like that. Most of the social liberalism comes with quite a price tag. The most reliable constituency for Big Government is single women, for whom the state is a girl’s best friend, the sugar daddy whose checks never bounce. A society in which a majority of births are out of wedlock cannot be other than a Big Government welfare society. Ruining a nation’s finances is one thing; debauching its human capital is far harder to fix.

“Not until I went to the churches of America and heard her pulpits aflame with righteousness did I understand the secret of her genius and power. America is great because she is good, and if America ever ceases to be good, America will cease to be great.”

Yet, judged by the standards of those old “pulpits aflame with righteousness,” is America still a good country?

Consider the cases taken up this week by the Supreme Court.

Whatever their beliefs, the justices, one trusts, will leave this to the states and people. For Roe v. Wade, where seven justices found the right to an abortion lurking in the penumbras of the Ninth Amendment, poisons our politics to this day. We don’t need a re-enactment of that civil war.

Still, what America decides about same-sex marriage will reveal much about what this generation believes to be a moral society.

Traditionalist America has always held homosexuality to be unnatural and immoral, ruinous to body and soul alike, and where prevalent—as in Weimar Germany—the mark of a sick society.

This belief outrages millions. Yet it is as old as mankind and was held universally in the Christian West until this century. Moreover, it is grounded in biblical truth, tradition, natural law, and Catholic doctrine.

Before 1973, the American Psychiatric Association regarded homosexuality as a mental disorder. Most states treated it as a crime.

For a significant slice of the population, homosexuality is natural and normal. They were born this way. And to deny homosexuals the freedom to engage in consensual sexual relations, or the right to marry, is bigotry as odious as was discrimination against black Americans.

Yet, though gospel to many, this belief has only the most shallow of religious, moral, and philosophical roots. It seems grounded in a post-1960s ideology that holds that all freely chosen lifestyles are equal, and to discriminate against any is the true social sin. [Mike: He goes on to describe a little more of what’s going on. He comes to the conclusion here.]

Which raises a serious separate issue.

If we Americans cannot even agree on what is right and wrong and moral and immoral, how do we stay together in one national family? [Mike: Good question, Pat. My answer is we don’t.]

If one half of the nation sees the other as morally depraved, while the latter sees the former as saturated in bigotry, sexism and homophobia, how do we remain one united nation and one people?

Today, half of America thinks the country some of us grew up in was bigoted, racist, homophobic and sexist, while the other half sees this morally “evolving” nation as a society openly inviting the fate of Sodom and Gomorrah and that is hardly worth preserving.

A common faith and moral code once held this country together.

But if we no longer stand on the same moral ground, after we have made a conscious decision to become the most racially, ethnically, culturally diverse people on earth, what in the world holds us together?

The Constitution, the Bill of Rights?

How can they, when we bitterly disagree on what they say?

By throwing out the old morality and embracing a new morality on abortion and same-sex marriage, America tossed her sheet anchor into the sea. And from the turbulent waters we have entered—our illegitimacy rate is above 40 percent, and no Western nation has a birth rate that will keep its native-born alive in anything like the present numbers—America and the West may have set sail on a voyage from which there is no return.

Mike:  It’s not just the United States and it’s not just America, it’s Western civilization, all those descended from the Hellenistic enlightenment that happened 3,000 years ago.  These are really the questions and I think the field of study that some of us, if not all of us, ought to spend some sober, somber, solemn reflection in, but we’re told if you do that: You’re getting into Rick Santorum territory.  You’re legislating morality.  You’re holding court.  You’re passing judgment on people.  Well, are you specifically passing judgment on anyone when you elect to or whether you are inspired to embrace a theology that has survived two millennia, that is descended from a theology that has survived five millennia, speaking of Judaism?  This is the crux of the argument.  You are then guilty of the bigotry, you, because you refuse to denounce basically your theological heritage.

If you’re to denounce your theological heritage, what are you to replace it with, what the cool kids with the pumped-up kicks say is theological heritage today?  Is it theological at all?  Most of them probably think we need no theology.  [mocking] “What’s God?  What do we need that for?  I can’t like God on Facebook.  I can’t follow Jesus on Twitter.  What do I need him for?  He won’t hang out in a Google chat with me.”  While the Transcendent and the things that stand or are supposed to stand the test of time are basically jettisoned in favor of the convenient.  [mocking] “It’s just convenient to not discuss these things.  We might disagree.”  Really?  Really?  The most evolved society allegedly in the history of the planet and we’re afraid we might disagree on things?  Maybe you might find that after sober reflection and solemn consideration, you may actually agree on many more of the things that you think you’re going to disagree on. 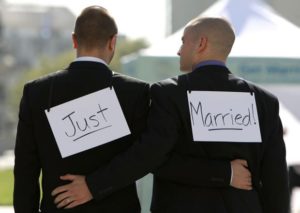