Mike: Let me get to Senator Jim DeMint. Now, I am proud to say that last week on this show I did a whole hour here on the GIVE Act, the Generational Investment and Volunteerism Enterprise, I think it’s called, the GIVE Act. This is the act that will create the Obamabot Army and pay them to volunteer. I mean, it’s insidious, ladies and gentlemen. It is also the act that has a passage in it where a blue-ribbon, ACORN-adorned board will be formed to determine whether or not Congress shall mandate, require, force, draft our children into mandatory community service. Mandatory volunteer community service, all run by the Obamabot Army, and all done because, why, you people out there, you’re the meanest, nastiest country in the history of the world. When someone suffers a tsunami, they don’t even look to the United States because we suck. We’re mean. We’re not generous. Why, we hate people. Right? Isn’t that the way it is? Right, Mr. Hatch? And the rest of you?

Well, 13 senators, 13 Republican senators voted against the GIVE Act. Senator Jim DeMint of the great state of South Carolina, the Palmetto State, was one of them. And I want to play you some excerpts from this brilliant floor speech that you’re not going to hear anywhere else on earth unless you were watching C-SPAN 2 yesterday. We tried to get Senator DeMint on the program. We have a call out to him. We hope he’ll be able to join us. If not, we’ll be happy to get him next week. I know he’s got a busy schedule. But in lieu of that, let me just play some of this to you because it’s brilliant. This man actually gets it. Governor Mark Sanford of South Carolina gets it.

[Clip] Senator DeMint: It works in America today. And it’s understandable why Congress would want to get involved, to see that passion to serve, that desire to do something that’s greater than yourselves, for us to look at that working in our civil society and want to get involved and expand it. But unfortunately our history shows us, when government gets involved, that it tends to take something that’s working and make it not work nearly as well.

[Clip] Senator DeMint: Civil society works because it’s everything that government is not. It’s small. It’s personal. It’s responsive. It’s accountable. Civil society must be protected from any effort to make it more like government. And that’s what we’re doing with this bill today. This bill centralizes control of important functions of our civil society.

Mike: Did you get that part? “This bill centralizes.” Who centralizes things, ladies and gentlemen? Free marketeers? Liberty-loving, freedom-loving politicians, hmm, hmm, hmm? Who centralizes things? Who? Communists. “Mike, there you go with the communist stuff. Why is it always commies?” Who centralizes things like volunteerism? Hmm? Brown-shirted Nazis? “Now, that’s just too – you’ve gone too far, Mr. Church.” Disprove it, then. Disprove it. The National Socialist Party of Germany, headed by Adolf Hitler, they centralized their youth services, their volunteer services, didn’t they. “Oh, that can never happen here.” Bull [bleep]. It’s happening here. Wake up. Back to Senator DeMint, who actually gets the Founding Fathers, too. Listen to this.

[Clip] Senator DeMint: The founders wanted the people to be free…

[Clip] Senator DeMint: Government charity is anathema to what our founders intended…

[Clip] Senator DeMint: …and what our Constitution stands for. Despite our good intentions, when we try to implement those good intentions and our compassion through the force of government, we are effectively violating our oath of office here.

Mike: Wow. Did you hear that? The GIVE Act is a violation of the oath of office. Now, if you go to my website at MikeChurch.com, or just go Google this if you don’t want to go there, America Again! – exclamation point – Declaration. Go Google it. I’ve gotten together with some wonderful and brilliant men who have written this declaration which says that, when Congress violates its oath of office, we here in our states can convene grand juries, and we can prosecute them. That’s right. That’s what the founders believed. That’s what happened in the 1790s. That’s what Mr. Jefferson advocated to stop this tyranny. And with Senator DeMint stating on the floor of the Senate that when you vote for something that you know to be unconstitutional, you’re violating your oath of office, I am telling you that all 50 states have the free will, the sovereign authority, the unquestionable sovereign authority, to prosecute those congressmen and those senators for that violation and that oath of office and to prosecute them to the fullest extent of the law.

There’s more. Here’s Senator DeMint on what this will do. Now, listen to this. The GIVE Act is going to create the 14th largest corporation on earth.

[Clip] Senator DeMint: If over half of Americans are already dependent on the government, this bill proposes to spend nearly $6 billion over five years, which means it’s going to be over $10 billion, probably a lot more over a 10-year period. It’s going to have near a quarter of a million Americans working for it.

[Clip] Senator DeMint: Which means it will be the 14th largest company, as far as employees, in the entire world.

Well, you can count me out. I tell you this, my friends. The day, the day the state of Louisiana betrays me and sends the notice out through my child’s public school that they will be conscripted in public service, I will fight to the Supreme Court. And even if they rule against me, I will – I’ll go to the penitentiary. I will vow, you will not cross this line. Civil disobedience? No. Constitutional obedience. This must not stand. These people are out of their minds. I actually believe we live in Red China now. I mean, we should all just get a hammer-and-sickle or a gold star badge and put it on.

There’s more. DeMint talks about Obama making it harder for the private sector to work. Now, remember my comments from last hour? Is this a coincidence? Dear Leader, economy crashing, massive expansion of government, talk of making a one-world currency and us being slaves to it? Coincidence, or well-orchestrated plan?

[Clip] Senator DeMint: …the charitable donations of the people who give the most to charity in this country. So look at what we’re doing. We’re making it harder for the private sector to work. And you also look at what we’ve done over the years, forgetting that a lot of private charity and a motivation to serve God and community is a religious-based motivation. What have we done in this country?

Mike: And there’s more. Let me get to the phones. I’ll get back to Senator DeMint. 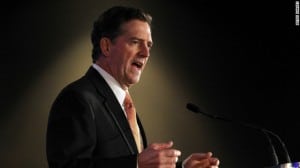