On or about this day , John Adams and Benjamin Franklin visited Thomas Jefferson at his Graffe House flat to convince him to write the Declaration of “Independency” they had been charged to produce by 28, June, 1776.

On this day in 1775, the Battle of Machias was fought, the first naval battle of the Revolutionary War. British authorities had enlisted Loyalist Ichabod Jones to acquire needed supplies. Two of Jones’ ships, Unity and Polly, were escorted to Machias by the British Margaretta, an armed sloop. The citizens of Machias did not trust Jones’ business practices so they decided to arrest him and go after the Margaretta. James Moore, commander of the Margaretta, managed to escape but the townspeople, led by Jeremiah O’Brien, outfitted one of Jones’ ships and pursued him. In the battle, Moore was fatally wounded and his vessel and crew were captured.  1 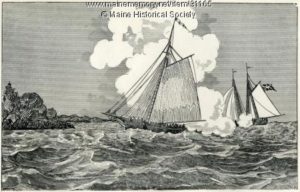 In 1775 on this day, British General Thomas Gage, governor of Massachusetts, issued a proclamation in an effort to offer amnesty to those who would lay down their arms. Amnesty was not extended to Samuel Adams or John Hancock, however, as they were believed to be the leaders of the Massachusetts rebellion. Gage also, in his proclamation, declared martial law on the province of Massachusetts. The proclamation had an overall condescending tone and gave the citizens of Massachusetts an ultimatum: either you’re with Britain or you’re against her. 2 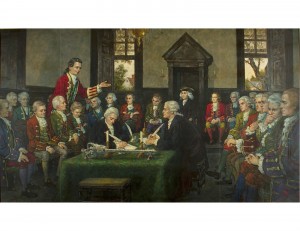