One notable birthday on this day in 1755, that of Nathan Hale. Hale was born in Connecticut and famously died at the age of 21 when he was hanged as a spy by General William Howe. Hale was among the top of his graduating class and he continued on to become a teacher. He considered the higher education of women to be a neglected issue and therefore taught women as well as men during his time as a teacher. After the Battle of Lexington, Hale enrolled in the militia of his town. Hale was one of the first in his town to publicly show his support of independence and taking to arms in order to secure it. Hale was part of a group known as Knowlton’s Rangers, a special corps led by Colonel Knowlton. Washington pleaded to Knowlton for a volunteer to covertly gather intelligence from the British. At first no one was willing to put his life on the line for this, but, despite pleadings from close acquaintances not to do so, Hale volunteered for the job. Hale carried on his person intelligence he had gathered, and when he slipped up and was caught by the British, this was the evidence used to convict him without trial. He was ordered to be hanged the next morning. He was hung upon an apple tree in Rutgers’s orchard, uttering first those famous last words, “I only regret that I have but one life to lose for my country.” 1 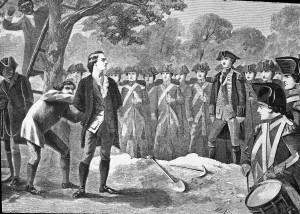 Another birthday on this day in 1756, that of John Trumbull. Trumbull was an American artist known for his portraits and paintings of the American Revolution. Trumbull was born in Connecticut, graduated from Harvard, and served in the Connecticut militia. In 1777 he began his painting career, studying with Benjamin West in England. His first history painting was The Death of General Warren at the Battle of Bunker’s Hill, after which he began painting The Declaration of Independence while visiting Jefferson in Paris. He continuously worked on portraits of prominent figures of the Revolutionary period. Trumbull served as a secretary with the Jay Treaty Commission after being offered the job by John Jay, afterwards returning to his art. In 1817 he was commissioned to create four large history paintings for the rotunda of the U.S. Capitol in DC and was also elected president of the American Academy of the Fine Arts. 2 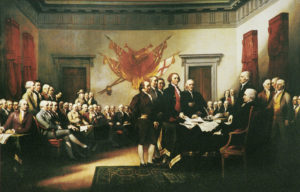